Having It All by Helen Gurley Brown 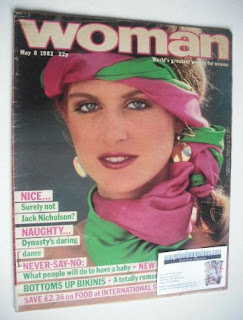 This hefty volume came out 20 years after S*x and the Single Girl, and until recently I'd never read either of these works. I followed a different type of feminism – the kind that despised makeup, skirts and high heels. I’m beginning to think I took the wrong path.

This is a distilled Cosmo advice column (HGB edited the magazine for years), sprinkled with American wit. (“We’ve all seen thirties movies in which... the billionaire is persuaded to back a loony invention powered by aardvaarks.”) It’s Dale Carnegie for women, the kind of boosterism parodied by Betty Macdonald in Anybody Can Do Anything. Is Ethel Evanski in Jacqueline Susann’s The Love Machine a cruel portrait of the "single girl"?

Helen was a “mouseburger” from Little Rock, Arkansas who clawed her way the top. She was pretty, but not strikingly beautiful, and started out as a secretary in the 40s supporting her mother and sister.
There were no internships back then. Start in a lowly role, she recommends, never think you’re too good for the job. Whatever you’re asked to do, do it to the best of your ability – unless it’s “sleep with the boss”.

You must have ambition – this is the United States of America! Don’t be like Helen’s accountant friend who “checks in with a few rabbity friends, and occasionally has a rabbity friend to dinner”. Fill your life! Cook for six Latvian students! Don’t miss your disco dancing class! (There were classes?)

She wastes no time on “don’t think about what everybody is thinking about you” – reputation is important, at work as elsewhere. Don’t be a diva. Look pretty, be pleasant, kind and helpful. It may not make you popular, but nobody will DISlike you.

Give men your whole attention – gaze into their eyes. Apple polish – be charming to superiors AND inferiors. And flattery is part of “charm”. (Men might remember that.) Don’t lose your temper at work, don’t tell people all about your inner feelings, private life or latest surgery. Work relationships can feel very intimate, but once you’ve moved on they forget about you. (And when a higher-up takes you out to lunch, they may want to start an affair, or they may want to find out where your ambitions lie. This is an opportunity to tell them which jobs you would be useless at.)

HGB had an eating disorder, and there is too much about punitive dieting. She wastes no time on “being beautiful on the inside” – “It’s on the outside is where they frequently judge!” Know what you look like – and your position in the looks league. “Many unpretty women seem to have grown up not knowing they weren’t.” The only consolation is that the beautiful girl may be too picky early on, and end up alone, or settling for Mr Second-Best. The unpretty should wear make-up just to show they’ve made an effort – it makes you look “approachable”. (I heard this from my mother – and from men. Unfairly, expensive clothes were also “making an effort”.) It’s the very attractive who tell you “beauty comes from within”, but plastic surgery is more effective. Finally, Helen recommends doing something with your hair – ie going blonde. “You create a look, and then act that way.” But don’t forget to update.

More tips: don’t buy the expensive perfume, get the cologne. Can you still get Jhirmack’s Nutri-pack peach cream hair reconstructor? “Good grooming – what a dull expression but we’ve got to call it something.” Clothes: go for good materials like silk and wool. Follow fashion for the up-to-date outline: “What was wide last year will probably be skinny this year.”

Yes, there’s lots about s*x. Please your man! She is direct about how you do this: not just HJ, BJ, fake it, but serve him real coffee on a tray with a linen napkin as a traycloth – and an exquisite flower in an antique vase. Get out of his apartment briskly in the morning and leave nothing behind. Flatter, don’t cling or argue. Give personalised presents – or expensive gifts.

Helen grew up in the 30s, when girls were supposed to do nothing, with anybody or solo, before their wedding night, when “the opening of the Aswan Dam was promised”. (In the early 60s, your husband was alleged to “awaken” you. Judging by the many letters to "Evelyn Home" asking “Is it all right not to climax?” this approach can’t have worked very well.) Helen advises “There is almost no chance that you are technically frigid”. Likewise, she says, don’t worry that you’re a “nymphomaniac”. (We were still using this terminology in the 80s, believe it or not.)

Recommended seduction techniques: a full-body hug on greeting. And “don’t talk too much or show off your brain too much or be too newsy.” (Uh-oh.)

We get the usual “where to meet men”, recycled from many magazine articles. (They often drop the essential component: take a girlfriend.) Introductions, work, parties. Unlikely settings like libraries – start a conversation by asking a practical question. Spectator sports, participatory sports, gyms. Evening classes in masculine subjects. Political activism. Don’t be pushy, but cook for him, invite him to a “movie, lecture, exhibit, concert”.

She is good on affairs with married men. Yes, he’ll leave his wife – for someone else who doesn’t know his back story. His heartfelt promises that you’ll “end up together” don’t have a date or an action plan. She warns against marrying down – you want your spouse to be “dynamic”, ie rich.

But after all the propaganda about the wonderful man she pressured into marriage, and recommendations to treat men like small children, she then describes how husbands act – like small children. Sometimes you just want them to be less difficult, she says. Translation: finding fault with everything. She claims you shouldn’t fight, but then describes an evening out where she was disappointed in the entertainment – she’d expected a star line-up. When she and her husband got home, they had a fight that lasted eight hours!

Live all your dreams, Helen advises. She bought an apartment with a piano because she dreamed that Stephen Sondheim would come and play it. She threw a big, star-studded party and invited Sondheim (they were strangers). He came and she asked him to play. With a “startled fawn” expression, he declined. Never mind, she says, at least I acted on my dream! I did it!

Perhaps some dreams should stay dreams. But I'm filing a lot of this under "things I wish I'd known". 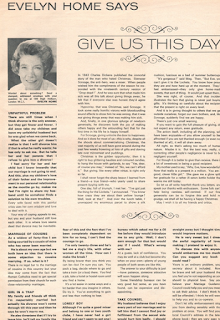