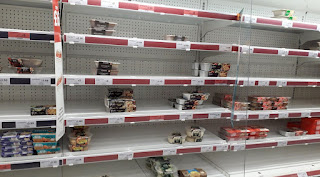 Supermarket shelves are empty because they didn’t bargain for people not going off on holiday due to Covid, because there’s a recruitment problem, and a training problem, and it costs up to £5,000 to get an HGV licence, and we shouldn’t be eating so much meat and plastic-wrapped food anyway! We’re not going to starve!

That's plenty compared with Cuba. At least there will be less waste as supermarkets have less to dump. (CL)

The shortages are due to the hot weather. @teachertwit2


I VOTED LEAVE BECAUSE...
(All spotted in the wild.)

You have to vote out because that’s the only way things can change.

Let’s take our rights back.

I want to have a say in how our country is governed rather than living under a dictatorship.

We’ll get imperial measurements back. And pre-decimal money.

The EU is a white racist organisation.

The vast majority thought a vote for Brexit meant every single foreign person living and working in the UK would be evicted. In fact every person of colour or person born in this country of immigrants. (@Vanessa32217951)

I think if we are all honest even Farage himself will admit that fishing was at the back of the things people who voted to leave wanted. The main one was 100% freedom of movement to be stopped and the UK to have laws made not the European human rights bill. [@Fog80Willy. Because they think the “human rights bill” stops the UK deporting immigrants.]

I voted Leave because the Human Rights Bill has literally taken away our rights. The right to remove unwanted people from our country. The money this is costing taxpayers could be spent on hospitals etc. If we get rid of this Bill it will curb immigration. (@Gillyknowitall)

I've met a couple who's only reason for voting 'out' was "To get rid of all these foreigners". (@KittenBumble)

I know somebody who exports to the EU… He actually asked me yesterday if it was true that VAT would be abolished from 1/1/21 because he thought all VAT payments went to the EU. He is VAT registered. (@eggs_horse)

People can't tell you why they voted for Brexit beyond soundbites like "Elites" "Bureaucrats" "Sovereignty" "Project fear". (@Irritatedllama)

My 80+ MiL voted leave because "after two world wars, how could we trust the Germans?" (TWJ)

I wanted to stick it to the establishment. (@simonharris_mbd)

I voted leave because I didn't want to be in the European Union any more. At the time it seemed right but it was definitely the wrong decision but I stand by what I did and I would vote leave again given the chance. (@Ggorble)

I voted Leave because I also voted to leave the UK Union but I'll gladly rejoin the EU in an independent Scotland where I actually have a choice. (@boydy47)

I voted leave because of deeply held beliefs the EU was a dangerous institution. (@fedfakenews)

Because I never win anything. (@acidburn2k20)

Because I believe in small government. (@FortyVictoria)

I voted leave because I thought we would be more democratic. It's taken a while. Now time to sort the House of Lords. (@pkpmartin)

None of us wanted this but we could not afford the benefit tourism and fraud on top of the ever increasing contribution to a corrupt system. My Polish friends demanded I voted leave because they didn't like the way their own family abused the system! (@Pikey_Wilf)

I voted Leave because it was the one and only chance we would ever get to vote on it. I do not want the UK to became part of a Federal European Superstate and that's where it's headed. If we had voted Remain then we would not get another chance. (@Bluestilton1990)

I'm reminded of the 'person' from the North East, who interviewed on the media said that he'd voted Brexit because 'you go to our local hospital, you wont't see a white face'. When asked how leaving Europe would affect immigration from Africa and Asia, he said he didn't know. (KL)