Agatha Christie's They Do It With Mirrors 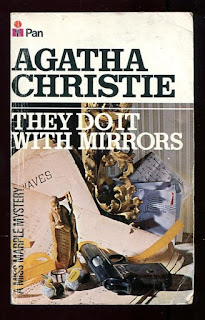 I’d forgotten how good this book is. Christie’s social observation and wit are to the fore, and she has fun putting the knife into earnest psychological theories. The story opens as Miss Marple is visiting an old friend, Ruth Van Rydock. She is one of a pair of American sisters Miss M was at school with in Paris in the distant past. As Ruth tries on an expensive dress in her swanky hotel room, the old friends discuss the absent sister – Carrie Louise. She had a tendency to marry cranks, says Ruth. She’s too idealistic!

Miss Marple responds: Of course it was the fashion when we were young to have ideals—we all had them, it was the proper thing for young girls... One gets over all that nonsense.

Ruth disapproves of Carrie Louise’s present husband, a philanthropist who wants to reform young criminals. “Wanting to improve everybody’s lives for them. And really, you know, nobody can do that but yourself." "I wonder," said Miss Marple.

Ruth continues to run down Lewis Serrocold: “One of those men of enormous will power who like living on a banana and a piece of toast and put all their energies into a Cause.”

Serrocold is now one of the trustees of the money left by Carrie Louise’s first husband – a billionaire Swede with the same passion for tinkering with society. Ruth is worried about her sister. On her last visit to the institution she felt something wasn’t quite right. If only Jane could go and spy out the land. But the dear old thing is so unworldly! Miss Marple brushes this objection aside. Ruth ponders: ‘Maybe, Jane, that St Mary Mead of yours isn’t quite the idyllic retreat that I’ve always imagined it.’

Miss M sums up her philosophy: “Human nature, dear, is very much the same everywhere.” She takes on the job, and sets off for Stonygates, a much-extended Victorian mansion where she hears a lot about the institution’s work. The staff and hangers-on also reveal something about current attitudes to the problem of youth crime, believing that “juvenile delinquents were not subnormal—that they had excellent brains and abilities and only needed right direction.”

As well as Lewis’s secretary, Edgar Lawson, she meets Gina, CL’s grand-daughter, and her surly American husband Walter Hudd – married in haste during the war. (The story must be taking place in the late 40s. At one point Gina appears in “a kind of peasant get up”, but CL's evening dress is "darned under the arms".)

“They’re all bats,” is Wally’s judgement on the inmates, while Lewis says of the troubled Edgar: “All he needed was responsibility.” Lewis thinks the boys just need to understand money instead of spending it on movies and girls. Gina is more forthright: “They only cosh people so as to rob a till or get money or jewellery—not just for fun.”

Also present or dropping in are CL’s two stepsons from an earlier marriage, Stephen and Alexis Restarick. Both of them are in love with the attractive Gina.Alex calls the mansion “the best Victorian Lavatory period”. Those were the days when all Victorian buildings were automatically dismissed as “monstrosities”.

Among the cast is CL’s daughter by her first husband, Eric Gulbrandsen. Mildred was a stocky, plain child, and later in life married a Canon of the Church of England. Now she’s a widow, and pours out her heart to Miss Marple. Mildred feels hard-done-by, and voices some common prejudices. Do I have to stress that these ideas belong to the character, not to Christie, who is sending them up?

“Everyone can help behaving rudely,” says Mildred, dismissing the idea that Walter may feel at a loose end in his wife’s home. And as for the way people behaved during the war: “I do so dislike the way many people gave way to panic about their families—and themselves, too, very often.”

Gina is the daughter of Pippa, adopted by the Gulbrandsens. As for her husband, Gina’s father: “You know what Italians are. Nothing matters to them but money,” opines Mildred.

“Pippa, you see, was the pretty one... I wasn’t old enough to realize that it’s character that matters,” she explains rather desperately. “They liked her best. A child whose own parents didn’t want her – or more probably illegitimate.” She goes on: “It’s come out in Gina. There’s bad blood there. Blood will tell. Lewis can have what theories he likes about environment. Bad blood does tell. ... But nothing’s thought of or considered here except a lot of whining boys and young men who want to live easily and dishonestly and don’t care about the idea of doing a little hard work. What about the decent boys from decent homes? Why isn’t something done for them? Honesty just isn’t interesting to cranks like Mr Serrocold and Dr Maverick and all the bunch of half-baked sentimentalists we’ve got here. I and my brothers were brought up the hard way, Miss Marple, and we weren’t encouraged to whine. Soft, that’s what the world is nowadays!”

These days she'd have a Twitter account. Her brothers (or step-brothers) are Alex and Stephen Restarick, and Christian Gulbrandsen – Eric’s son by an earlier marriage who is actually older than CL.

Dr Maverick is a psychiatrist at the institution, described as advancing upon Edgar “with a kind of professional zest”. The place is later referred to as having a “fervent medical atmosphere”. Alex Restarick, when he arrives, is more confident than his brother. He is “one who bore upon him the authority and good humour of success”. Clearly environment has helped to form his character, and what is the Institution doing but providing helpful surroundings to troubled youths?

But this doesn't stop the cast harping on the heredity theme, rather repetitively:

“Why do you think I’m so upset?" wonders Gina. "Because I’m half Italian?"
"Very possibly. At least perhaps it explains why you don’t mind showing what you feel."

Later someone says of her: “She’s half Italian, you know, and the Italians have that unconscious vein of cruelty. They’ve no compassion for anyone who’s old or ugly, or peculiar in any way.”

And then of course somebody is found dead, and CL's tonic is adulterated with arsenic...

Gina cried, ‘But they couldn’t possibly think it was one of us!’ Her dark eyes were round and dismayed. ‘Don’t say it must have been a tramp, dear,’ said Alex, helping himself lavishly to marmalade. ‘It’s so hackneyed.’

Miss Marple stresses that villages are not the “cosy, idyllic” environments people like to imagine. "Very nasty things go on in a village, I assure you. One has an opportunity of studying things there that one would never have in a town."

The police arrive in the form if Inspector Curry and Sergeant Lake. The unflappable Curry has a habit of doodling cats on his notebook, and even dares to refer to one of Miss Marple’s earlier cases: "We mustn’t be misled by the time you heard the shot. That’s a trick that’s been done before now, you know. Fake up a shot so as to fix the time of a crime, and fix it wrong.”


The reader begins to tot up the characters with dubious ancestry, who may have been likely to lose control and suddenly murder somebody. Gina’s mother was adopted, her father was Italian. Edgar claims his father was Winston Churchill – or Field-Marshal Montgomery. Stephen and Alex’s mother was Russian. As Stephen says, “She was an excellent shot. Quite a bit of trouble she caused. She was a Russian dancer, you know." And nobody knows who Wally’s “people” were. “We know absolutely nothing about him. He’s probably one of these dreadful American gangsters." Mildred again.

Miss Marple sees Mildred on her way to give her evidence and thinks how like a Canon’s widow she looks. “So few people ever did look like what they really were,” she ponders, dropping the reader a hint. To Inspector Curry, Mildred starts savaging all around her again. Gina? “She’s always been man mad!” And she’d “say anything. The Italians are never truthful. And she’s a Roman Catholic, of course.” ... Inspector Curry side-stepped the ecclesiastical angle.

When Curry interviews Alex, we’re reminded of the man’s foreign origins: “He noted the slightly pointed ears, the un-English Mongolian type of face.” Later Alex tells Gina: "You have the rudiments of honesty, I’m glad to see. That’s the Latin in you."

Mildred catches them kissing, and accuses Gina of the crimes: “I daresay that it’s the Italian in you that makes you turn to poison.”

Eventually everybody's ancestry is sorted out. I'm glad we've moved on from the idea that we behave like automata just because we're Italian, or Russian, or maladjusted... Or have we?

There's a TV adaptation with Joan Hickson, a version with Julia Mackenzie, and a rather good film with Helen Hayes as Miss Marple, John Mills as Lewis, and Bette Davies as Carrie Louise. Yes, really.

More Christie here, and links to the rest.