So, was Ngaio Marsh a snob? 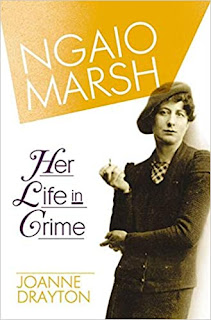 I’ve now read Joanne Drayton’s biography of Ngaio Marsh, Her Life in Crime. As an Amazon reviewer says, ”it could have done with a darn good edit... There is a huge focus on her theatrical productions, with discussion on their merits or otherwise, reviews, thoughts on the production itself. The books are merely described.”

Drayton gives a good account of Marsh’s life (though I skipped the theatrical bits). Marsh divided her time between New Zealand and England, where she fell in with a moneyed set. She even ran an interior décor shop for a time (I wish she’d used it as background for a book).

But Drayton doesn’t really know much about English society between the wars. “1931 was the heyday of the flapper” – that was the 20s or earlier. In Marsh’s first book a murder unleashes chaos “among the sports-car driving, dress for dinner, horsey set”. Everyone from solicitors and bank managers up dressed for dinner in the 30s. Dt Sgt Smith turns up to snap the corpse with his “Box Brownie”. Surely he’d have had a more sophisticated camera? And wasn’t he called Thompson?

“On the surface the four Queens of Crime, as they became known, seemed to be conventional upper-class women with values rooted in the 'smiling and beautiful countryside' ”. None of the Queens (Christie, Marsh, Sayers, Allingham) were upper class, and it’s Sherlock Holmes who points out that the “smiling and beautiful countryside” hides more crimes than the worst slum. She also says the “privileged” Christie came from a “country squire habitat” with forelock-tugging servants. Christie grew up in the seaside resort of Torquay and had a mutually respectful, business-like relationship with her family's servants. Allingham's family were writers, Sayers' father was a vicar, Marsh's father was a bank clerk.

Drayton even calls Holmes upper class! Perhaps – and she's not the only one – she thinks our upper class is much wider than it is. It's an extremely narrow stratum, mainly confined to people with titles and country estates, and those who have enough money to mix with the aristocracy. Holmes doesn't reveal much about his family – though he lets drop one day that one of his ancestors was a French painter.

Drayton gets that Marsh’s Death in a White Tie is a dissection of the English class layer cake, not a eulogy to it: “Ngaio’s attitude to snobbery was clear – she disliked it.” But she talks of “Ngaio’s criticism of the rhetorical aspects of the class system”. Does she mean hierarchical?

Here are a few more howlers: "Alleyn’s natural habitat would remain the English hothouse cosy … The class system inevitably rears its cosy head in Scales of Justice…” What's cosy about the class system? In Scales one of the most appealing characters is a nurse (she praises the hierarchy to Lady Lacklander but calls her "dear", and Lady L treats her as a friend). Drayton even calls Death and the Dancing Footman’s cast “cosy” – nearly all of them fear, envy, suspect or hate at least one of the others.

She thinks Victoriana is a plural, like data and media. She refers to “Cliff, ‘a full-sized enfant prodigé’ [sic]”. I’m sure Marsh referred to Cliff correctly as an “enfant prodige” (no accent). In the same paragraph Drayton “corrects” Marsh by referring to Cliff as a “protégé”. She reports that Sam Whipplestone, hero of Black as He’s Painted, looks forward to life in “some subfuse [sic] layby”. The word is “subfusc”, and it means “drab”. (Not entirely her fault – the typo is in the paperback.) Marsh writes a letter from Scotland: “Hollywoodhouse was something out of a fairytale.” The Scottish palace is called Holyroodhouse – a far cry from LA.

Otherwise, the book is easy to read and well written – she talks of someone’s dreams “beginning to fade and curl at the edges”. And she makes it clear that Marsh wrote about snobbish characters (often hilariously), without (most of the time) being a snob herself.