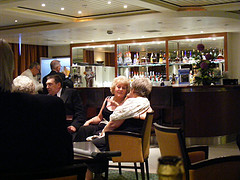 Just love yourself and remember that confidence comes from within - or it might be more effective to seek out a group of people similar to yourself.


Parents who protect their children from the truth – that some tasks are difficult, that they won’t be good at everything – are essentially lying to their child. [When they realise,] the children stop relying on their parents. P. Bronson in Guardian booklet on family relationships February 2012

It's also very important to realize foreplay starts long before the bedroom when the man shows kindness, respect and consideration. psychcentral.com

A recurring theme among many women is that they try to place themselves under a "holier than thou" light, never admitting that they fooled around or dividing their number of boyfriends by five. askmen.com

It made me a romantic, it made me think the reason to be with somebody was purely for love, not for a meal ticket, not to fulfil some conventional obligation imposed by society, says Cherie Lunghi.

We love telling stories in the hope that people will find us interesting. Karl Sabbagh

It is a ‘publicity story’, something you use when called on to give an account of yourself. It has some approximate relation to the truth – it began with an attempt at honesty and accuracy – you’ve repeated it so often that you no longer know what it means. Daniel Soar, London Review of Books, 21 July 2005

They were taught new hope-related skills, including identifying goals, ways to achieve them, and how to motivate themselves. psychcentral.com

As on any cruise, social groups quickly defined themselves by nationality, age and tolerance to alcohol. Anthony Horowitz Daily Telegraph March 2012

Feminism was established so as to allow unattractive women easier access to the mainstream of society. Rush Limbaugh

Everyone thinks they’re going to marry and have children. woman on BBC March 8 21

Anxiety and insomnia are often responses to various other actual difficulties and misfortunes. And poor physical health can easily itself be one of those, and can tend to cause some more (such as unemployment, lower income, lack of a life partner). Commenter on Daily Telegraph website Jan 2012