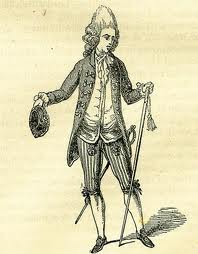 Macaroni penguins were “named after a group of flamboyant dressing men (often with dyed hair) of the 1700s who traveled from England to Italy (and ate pasta) and were called 'Macaroni Dandies'.” (marinbio.net) They were named, says Nigel Marven, “after the 18th century English dandies who'd been to Italy on their grand tours and come back with pasta and yellow streaky hair” (guardian.co.uk) (Macaroni just meant a dandy - no pasta involved.)

Trotsky was killed with an ice pick, a shortened “mountaineering instrument”, according to the Guardian (June 16, 2005), which the murderer had hidden under his clothes. Surely it was a small handheld instrument for breaking up blocks of ice to put in cocktails?

“There's a fear of telling this story because there's a fear it will be too depressing,” said Angela Workman, Bronte's writer and director. “There was great tragedy in their lives and they died young, but the lifespan for women in that region at that time was 25, and it occurred to me that the Brontes lived beyond that.” (That was the average age at death – you have to count children who died in infancy, and women who lived to old age, like the Brontes’ 70-plus servant.) In May 2012 the New Scientist says that people in the olden days only lived to 35, so marriage was only intended to last 15 years.


Meerschaum pipes are made out of seafoam? Meerschaum means seafoam, but it’s a kind of rock, regardless of what they may say on Flog It!

What would Iain Sinclair's ideal resemble? Railyards and pin-wheel poetry presses, certainly. (Robert Macfarlane, Guardian 15 July 2011) Does he mean daisy wheel? Or a cast-iron hand printing press worked by a huge wheel? A pinwheel is a firework.

“April is the cruellest month in Niigata: a cold muddy earth under a sullen leaden sky.” (rurousha.blogspot.com) No, it’s the cruellest because it breeds lilacs out of the dead land. Just when you’d thought everything was safely dead, it gives you a sign of hope, or desperate nostalgia for the time when you were young in a lost world like Vienna before the First World War.

Poisoned mice being “parachuted in” to Guam to get rid of a plague of snakes became mice with individual tiny parachutes. (What would the mice do on landing? Hide the parachute under a bush?) The mice (laced with paracetamol, deadly to the snakes) were actually deceased, ex-mice and were chucked out of the planes. (BBC and others, May 2012)

Cut glass is faceted like a diamond. It’s expensive, but you can get a cheap, moulded imitation. If you speak in cut-glass tones that just means you’re posh – it has nothing to do with how your voice sounds. Many misunderstandings arise.

With breathy pauses between words and clipped, cut-glass consonants, Blunt introduced one maudlin dirge after another. (Observer, March 19 2006)

Diana Mosley has gone down in history as the cutglass blonde in thrall to the Führer. (Observer, Jan 2 2005)

She speaks and it’s like the finest glass you can imagine breaking. (Intruder Michael Fagan on the Queen)

We want the beautiful arched eyebrows, the soft cupids bow, lengthy eyelashes and cheekbones you could cut glass on. (fabmagazineonline.com, 2011)

There are surely not two families in Camelot with that cheek bone gene. The actors Colin Morgan and Katie McGrath could chisel glass with theirs. (Andrew Billen, Times Sep 13 10) Is he thinking of "chiselled" features? You cut glass with a wheel, not a chisel.