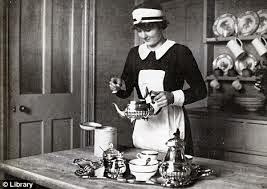 Nothing I did was right for her... I just gave up. I didn’t say anything. I just walked away and left her. (Below Stairs, Margaret Powell)

When I was about 25 I looked in the mirror and I said to myself, “Girl, a good plain cook you’ve decided to be, and a good plain cook you’re going to be all your life. It’s certainly sure you’re plain and it’s certainly sure no one is going to want to marry you.” That’s how I found it was too.’ ... One’s whole life was devoted to working to that in those days; getting a permanent boyfriend... You can stuff men up with any old yarn. They believe anything. You’ve only got to gaze into their eyes, and sound as though you mean what you say... The ratio of girls to young men was so high...[sex] seemed to be the only way to keep him... You had a hard job not to do it if you were not going to be stuck without a young man at all. (Below Stairs, Margaret Powell, writing about a servant's life in the 1920s)


I wish I had a dollar each time a scientifically incompetent ideologue claimed science is a religion. (psmag.com)

Responsibility was continuously placed on young people's shoulders rather than with the suspected abusers. (BBC on the Rotherham report)

Great is truth, but still greater, from a practical point of view, is silence about truth. Facts do not cease to exist because they are ignored. By simply not mentioning certain subjects... totalitarian propagandists have influenced opinion much more effectively that they could have by the most eloquent denunciations. (Aldous Huxley)

How come the programmes designed to improve students’ self-esteem did not actually improve their self-esteem whereas direct instruction in maths and English did? (Web of Substance)

Scientists have discovered that relationships are key to a successful life, because family and partners provide support. (Dr Brooke Feeney and Prof Nancy Collins reveal their findings in Personality and Social Psychology Review)

The assumption statement – this manipulative tactic seeks to turn your behavior into what the beholder perceives it as, whether or not their interpretation is accurate. (Wikihow)

I think I'm against against-againstism. (Steven Poole)
I’m 40 and returning to life in a shared house – deal with it! (Guardian Aug 2014)

There's a lot of comic book fans that love stories about superheroes that fight for truth and justice, but harass "social justice warriors". Just thought about that, and like. What do you even say to that?
The epitome of what they hate? Superman, really. (@AmyDentata)

An excellent preparation for learning new things in the future is to acquire plenty of knowledge in the present. (Web of Substance)

As he that taketh away a garment in cold weather, and as vinegar upon nitre, so is he that singeth songs to an heavy heart. (Proverbs 25:20)

What believers fail to grasp is there is no relationship between faith or belief and something actually being true. (Noel McGivern @Good_Beard)

The business world has a terrible record of enthusiastically adopting head-slappingly banal ideas. Anyone remember Who Moved My Cheese? (Sathnam Sanghera Times Aug 2014)


Cool kids “surround themselves with good-looking friends” says BPS Digest (as well as trying to act older than they are, and committing minor crimes).  “As adults, cool kids also tended to blame their recent relationship break ups on their partner not thinking they were popular enough.”

La Peau de Chagrin firmly established Balzac as a writer of significance in France. His social circle widened, and he was sought eagerly by publishers for future projects. (Wikipedia)

As goes the playground, so goes the world. (Elizabeth Bastos)