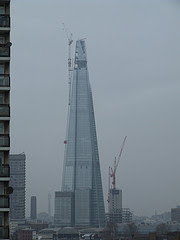 The Shard
It seems sooooo long ago.... boot-knocking? swing by? grey goo?

2002
celebrate (diversity etc)
In France, insecurité is fuzzword for crime
gut-wrenching
deepen for strengthen, intensify, exacerbate etc
feral
shard “Three interlocking shards of aluminium are designed to represent the ravages of conflict on land, in the air and on water...” Guardian July 3, 2002 re Daniel Libeskind’s Imperial War Museum in Manchester. "Asenbryl hand dyes plastic tubing in rich colours, before slicing them [surely it?] into individual shards and threading them together." Press Release from Yorkshire Sculpture Park

vibrant
muppet meaning idiot
thinking outside the box (August)
baby steps
“Shroud-waving was a proud tradition during the 1992-1997 Major government, a time which to most MPs seems as distant as the pre-Devonian period.” Simon Hoggart

24/7
ragtag (for armies without uniforms eg the Afghans)
the skinny for “the knowledge” (Front page of Guardian Guide Nov. 16, gone 2012)
mojo (Sept)

bada bing! (There’s even a café called this in Clerkenwell. And now nobody says it any more 2006, or in 2012.)
How dull/silly etc. is that? (Been around for some time.)
wrenching for agonising
present but absent (like it)
swing by (October) (gone out 2004)

hinterland (Evening Standard Dec 2 02 CoE is “moral hinterland” of the nation. Something like “moral foundation”?)

is not an option

Mad as a bicycle/brush/goose/snake/fish/bell/pink balloon/box of frogs/bag of spiders/cut snake/hornet/bucket of toads
You say that as if it was a bad thing!
road kill
witches’ knickers - plastic bags stuck in trees (Guardian 2/12/03) (or witches’ britches)

street for "the word on the street"
boot-knocking is the new bonking (Obs March 2) From States, just hit here. (WordSpy's Paul McFedries writes: This phrase originated (or, at least, was popularized) in hip-hop/rap circles as "knocking the boots" or "knocking boots." Rapper Candyman used the latter phrase as a euphemism for sex throughout his 1990 LP Ain't No Shame in My Game.)

the lollipop look - losing so much weight that you look like a lollipop, ie your head looks too big for your body (people who do this are Lollipop Ladies 2005)

multipolar (world) (Jacques Chirac) The French very keen on “poles”. But surely you can only have two poles, a north and a south? (Means "world no longer ruled by only two great powers".)

destination events/shopping/weddings
sleb (celeb) Guardian June 18, 2003
event TV/films (you watch TV to have something to talk about)

bod is back (July) but only when referring to Demi Moore’s new one, which cost (insert enormously high figure here).

No one can mention tweed without saying Miss Marple.
Deal with it/get used to it/get over it

hobble (for hamper. Suppose people have been told not to say “cripple”.)
greenwash (cosmetic attempts by firms to appear environmentally sensitive)
big up
top dollar
tsunami
get a wriggle on (over already 2004)
fusty
bling-bling (became bling)
it’s not rocket science (has replaced "It’s not brain surgery".)
joined at the hip