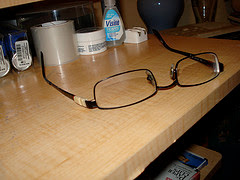 I was condemned to live amid that lower level of school society, beneath even the swots. These were the shy, the gangly, the awkward; people whose voices had not yet broken; the pyromaniacs - and worst of all, the people who actually liked classical music. Here, cooking cheese on toast over a Bunsen burner, I would live in a Dantesque limbo, surrounded by the wonkily bandaged, spectacle-wearing acquaintances (who are probably now making millions by genetically engineering onions). Even joining the Christian society in a last, desperate attempt to meet girls bore no fruit. John Runcie on life with broken glasses, Guardian Feb 17 03

As soon as I changed my email address to a less foreign name, I started getting invited to interviews. Agata Wasziewicz-Schmidt Dos Santos, Independent January 10, 2012

A study revealed that Kevins – along with Mandies, Chantals and Justins – struggle to get dates on dating websites. “Mails sent from an Alexander were clicked on 102% more times than those from a Kevin,” said the leader of the study, at the Humboldt University in Berlin. SEE the woman freelance who got loads more work after she called herself Richard and called her website Men with Pens.

Looks are a big part of how our [lives] pan out. Sarah Burge, who gave her six-year-old daughter liposuction and breast augmentation vouchers as Xmas/birthday presents.

The lingo of lingering and lost friendship is an interesting one. To 'de-friend' is to cease contact - perhaps because you fear the person is really a 'frienemy', or because of a reduction in 'mutual chatisfaction', but usually because, consciously or unconsciously, you just let it happen. To 'contract Palzheimer's' means to let a great pal drift from the mind, as a result of the passage of time, lack of time, relocation, a new 'friendscape' and/or changed values. John Hind, "What's the word?," The Observer, December 14, 2003