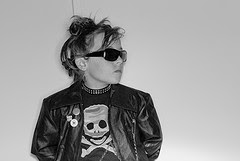 Having failed to make a convincing punk in his teens, at university Harry Enfield decided to dress in suits and go about scowling at everyone. Guardian Jan 2012

The subtext is that external economic factors can never be the cause of someone’s unemployment, the problem must somehow lie with the individual. Guardian February 1, 2012, on an organisation that tries to get the unemployed back into work. (For unemployment read any problem, and delete “economic”.)

The results also highlight the self-presentational value of first names and underscore the importance for parents to choose positively valenced first names for their children. From Unfortunate First Names: Effects of Name-Based Relational Devaluation and Interpersonal Neglect. Social Psychological and Personality Science, 2012

Fine sentiments – they are all very well. Agatha Christie character

Women should leverage their sexuality to get promotions, make sales, get high-earning husbands—great legs help with all that stuff. Blogger and businesswoman Penelope Trunk

But as with more important things in life - girlfriends, your health - you only appreciate them when they're gone. BBC Jan 2012

Henry Irving learned “ghostwritten speeches to pass as cleverer than he was”. Writer Roz Kaveney

Notice how players turn after every point only to their coterie of chums in their ever-present entourage for approval: this consists, at least, of their trainer, hitting coach, psychotic parent, and partner (or, depending on their sexuality, what the BBC likes to call their "good friend"). (Patrick McCarthy, Guardian June 27, 2007)

Out in the real world, nerds collect in certain places and form their own societies where intelligence is the most important thing. Paul Graham

Unpopularity is a communicable disease; kids too nice to pick on nerds will still ostracize them in self-defense. Paul Graham

You might think it's a good idea to keep your head down and do the work you're assigned. But most organizations actively try to grow their next generation of leaders from today's individual contributors. In fact, many companies have an implicit "up or out" policy that requires employees to participate, collaborate, grow and advance. You need to be seen and heard. cbsnews.com

What I am learning is that the lifestyle I have been leading has a limited shelf-life. Self-confessed sex addict who had multiple brief relationships

As a prettier woman she would have encountered a better social reaction to her gender transition. (From page on transgender people at umich.edu.)