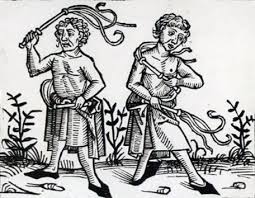 The editor of Gay Times earlier posted vile tweets about Jews, fat women, women, “chavs” and the disabled. He has “apologised”, claiming that he denigrated other human beings as a result of "self-loathing", he "hadn't been aware" of the effects of using social media in a "nasty" way, and he was a "product of his environment".

John Rivers tweeted an apology on Tuesday and said in an accompanying statement that at the time he faced “issues that prevented me from treating people with the respect and kindness I value so dearly now”. Speaking to Buzzfeed, which uncovered the tweets during research for an interview with Rivers, he said they revealed an “immaturity and self-loathing” he had at that time, but was adamant he had changed in the last two years. “I think it shows that before recently I hadn’t been aware of the effects that social media and using platforms in such a nasty and pernicious way had,” he said. “It shows I have grown.” Rivers also attributed his prejudices to his environment. “I am a product of my environment – like many of us are,” he said, adding: “I have said things that are not kind or not nice and nor do they reflect the type of person that I have become.” (Guardian)

Alvaro Neto, married to Athina Onassis, “desperately tried to persuade her that it was a fleeting mistake”, after being found in bed with another woman at the couple’s mansion. He also “claimed that it was a meaningless one-night affair that should not cost them their marriage”. His dumped mistress sent Athina documentary evidence of their long relationship. (See also “It was just sex, she meant nothing to me.” And “He wouldn’t have fallen in love me if there weren’t problems in the marriage”. Though maybe that’s more self-delusion.)

A Utah police officer fired for dragging away a screaming nurse who refused to take blood without consent blames his 'unfair' dismissal on the fact the incident was captured on camera.

The answer to any plea for traditional city layout, basic requirements like gardens, cupboards, windows: “We aren’t Georgians. We don’t live like that any more.”

There are 1001 reasons why we shouldn’t “feed the troll”, pursue neo-Nazis, condemn Harvey Weinstein, support historical child abuse cases. The response is much the same every time. Let’s not discuss this any more because:
People are making too much fuss.
It might be triggering for some.
I don’t want to jump on a bandwagon.
I don’t want to feel like a victim.
It won't help.
(Feel free to use the words "witch hunt" and "baying for blood".)

It’s not how real men behave, and it was out of character.

Emma Thompson should have done something to stop it.

All the women complaining are “just attention-seeking” or "expressing PC outrage".

If the complaints were real, they would have spoken up sooner.

We have more important things to worry about.

In my day we just dealt with it.

It’s about power, not sex. (As so many people say as if they were the first to think of it.)

The media are digging up women prepared to say “Girls should take it as a compliment – just a bit of fun etc etc”.

Janice Turner in the Times brings out all the “hysterical over-reaction” tropes, including “We worry that the best-qualified, most liberated and fortunate women ever born too often posit themselves as Victorian virgins or fragile ninnies who will shatter like glass at “triggering” language or an ill-judged snog.”

Nice men are derailing the conversation to: “So are compliments not allowed? How can we ever ask a woman out?” (Let’s not go back to the 80s, when men decided that romance was sexist and a bourgeois convention, and as a consequence were rather cold, rude and business-like. “I’m not going to patronise you by telling you you are beautiful”, "I can't say 'I love you' because it's a cliche" etc.)

This week there's a lot of backlash about "impulses" and "losing control". (Domestic abusers employ the same rhetoric.)

Harvey Weinstein says: I made mistakes, please give me another chance. (He went into rehab for “sex addiction” – for a week. And lost his job.)

By lunchtime, I expect “Don’t pry into private matters” from the Tories and a new, Woke way to ignore it in a feminist way from the centre. (@flying_rodent)


And everybody has their own unique take on the Flanders poppy:

No-one should feel forced to wear one.

The poppy has been hijacked.

It has lost its original meaning.

It's a symbol of oppression and imperialism.

It has changed from a remembrance of the horrors and loss of war into a glorious celebration.

So many people NOT wearing a poppy! I feel like stopping them and asking exactly why not. (via Facebook)

Has the core meaning of the poppy appeal been diluted by crass uses and commercialism? (BBC)

A Twitter account called @giantpoppywatch wants to “highlight the absurdity and obscenity of what’s happened to Remembrance Day”. He says that in the good old days, the poppy “was fragile, and everyone's was the same - maybe that was the point." He doesn’t like “commodification and branding”, either – shops using the symbol for shop window displays. "Now there's a lynch mob of tabloid journalists and Twitter enforcers ready to pounce on any infraction, such as appearing on TV without a poppy on."

Royal British Legion says: “There is no right or wrong way to wear a poppy”.