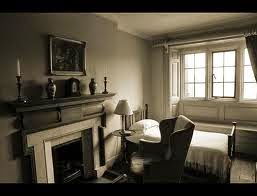 To those whom God has forsaken, is given a gas-fire in Earl's Court. (Patrick Hamilton, Hangover Square, 1941)

Nobody sensible minds being laughed at. (A Pony for Jean, Joanna Cannan, 1936 Jean, the 12-year-old narrator, also says that if groups of people don’t talk to you it’s probably because they can’t think of anything to say, not because they despise you.)

Over the days of wrangling I hoped that Dad would at some point acknowledge that in my own way I was standing up to him, something that dominant personalities are said to admire, though not all the evidence points that way. (Adam Mars Jones in the LRB, on telling his father that he was gay)

The hardest thing kids must do is break into an already-formed play group. (Daniel Goleman, author of Emotional Intelligence, paraphrase)

When my information changes, I alter my conclusions. What do you do? (Maynard Keynes, allegedly)

Kidnappers always start with a massively unreasonable demand. They don’t expect to get it; they’re just trying to make anything less seem a relief. Pay too much too soon and the kidnappers think they have underestimated your resources and try to extort a second fee before releasing the victim. (Dick Francis, paraphrase)

“Be careful to ‘be real’”, said a media consultant in a 1999 memo advising Mrs Clinton ahead of a tour that was pivotal to her aspirations... to become a US Senator. Urging Mrs Clinton to be “chatty, intimate, informal”, she insisted: “It’s important that your tone stay informal and relaxed and therefore not political. Look for opportunities for humour. It’s important that people see more sides of you, and they often see you only in very stern situations.” (These were “attempts to carefully manipulate her public image amid fears she appeared distant and insufficiently authentic.” Times Mar 1 2014)

There is an old idea that if you’re socially skilled, you can make friends anywhere you are. That can be true, but for your day-to-day life, it’s not very relevant. You can’t just go to a bar or a public place and find people that would be “fit” to be your friends. Sure, you can find great people, but a public place is actually not the best place to create friendships. Friendship works in a way that it needs context. It needs to be in an environment that bring people together so they create a connection with one another. That’s why I always recommend that you stick with communities, clubs, and groups. You can research on the internet for a few minutes and find communities that meet in the real world. Make sure that you choose communities that are about something you’re interested in. It’s much easier to build friendships within a private community. (lifehack.org)

Bullies always shoot themselves in the foot. (Dr Brian May)