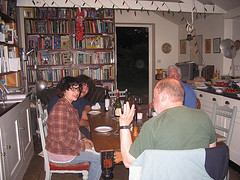 Books in the kitchen? That's posh!

supper apparently is the most upper-class word ever ever ever
avi for avatar (in Australia – and now everywhere?)
Are coaches now mentors?
the eurozone crisis keeps “deepening”
bariatric surgery (taken over from gastric band)
government still keen on “scrapping” things
folk music now means drippy tunes with breathy vocals and possibly a harp and flute


hugger mugging – getting close to a mark by pretending to be drunk and dancing around, then stealing their phone/wallet

boutique: We’ve seen brightly coloured ‘boutique kettles’, and heard people refer to ‘boutique firms’, ‘boutique offices’, ‘boutique publishers’, ‘boutique libraries’, ‘boutique services’… and, of course, ‘boutique shops’ (ie ‘boutique boutiques’, if you will). None of it means anything; it’s just a panicky attempt to be seen as small, squidgy, unthreatening and not out to get your money. (Middle Class Handbook)

unboxing: unpacking hi-tech products. People video the process and post the results on youtube. (No, me neither.)

This is a perfect happy-dance situation. Kirsty Allsop, July 25 12
lappy for laptop
deliver for “make it so” (people complaining)
shout-out (shurely American?)
Two-handed “fanning tears away” gesture seems to have gone out.
douche (We’ve picked it up from the States, where it’s short for “douche-bag”.)
bottle it (as in “bottle Olympic pride and confidence”, not “wimp out”)

killing spree
the question now is… (both journalese)

pre-fall (late summer)
owning (for “owning up” or “owning to”)
Nobody talks about “the new millennium” any more (turned out to be just like the old one).
clothes manufacturers are using “asymmetric” to mean “large and baggy”