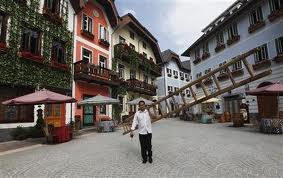 Copy good architecture from the past: rebuild it exactly. (That's an Austrian village in China, above.)

teabag rests, teaspoon rests (Give us a spoon that's long enough to stir the latte, and ensure that the glass fits the saucer. Thank you.)

Every supermarket to  have two men-only queues that compete on speed. (Or perhaps we need men-only supermarkets.)

coathanger covers (They stop your clothes falling off the hanger.)

cloth shoe bags (For packing – you can get them from Amazon.)

small, thin paperbacks (About the size and weight of an e-reader.)

the breaststroke (Why does everybody have to learn a swimming style designed for ultra-fast racing? You might want to see where you’re going and look at the view. And take it slowly.)

all train seats should have tables (Get rid of “airline seating”.)

You get the ebook when you buy the print book.

The East India company paid British women their passage to India and their living expenses for a year hoping they’d marry its staff.

stable doors (So you can lean out and talk to passers by.)

We have 500 cable channels, but we can’t watch one channel and record another. And thank you for iPlayer, but I still need a video to record repeats and cable channels. (There may be a higher-tech solution.)

Stop the sale of alcohol on trains and planes. Ban travellers from bringing their own. Ban drinking in public places. After a certain hour, make customers order food. No more alcohol in TV hospitality. Don't show anyone drinking alcohol on TV or in movies.