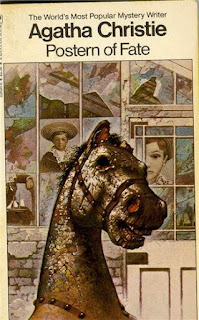 The title is taken from a poem by James Elroy Flecker, and also features in a Parker Pyne story (The Gate of Baghdad, 1934).

Even Christie’s fans agree that this book is a mess. It is possible that she was suffering from Alzheimer’s when she wrote it. Wikipedia says that she struggled, and the book was knocked into shape by her husband and secretary.

This is a book about clues found in books, and it’s a book full of clues. Tommy and Tuppence, the one-time Young Adventurers and wartime chasers of spies, are in their mid-70s and retired. They have bought a shabby old house in Hollowquay called The Laurels. It is transparently Christie’s beloved family home in Torquay, Ashfield, and her own toys and children’s books are still there in the attic and in a grimy conservatory that no-one has opened for years.

Tommy is permanently worried about Tuppence and doesn’t even like to let her go shopping on her own. Tuppence claims she can barely remember their old cases, let alone what she’s come into a room for. A lot of the story, such as it is, is conveyed by muddled conversations between the two of them. But Tuppence has a theory that it’s through such rambling talk that the past will be remembered and the truth become clear.

The “plot” starts off when Tuppence finds a message hidden in an old copy of The Black Arrow: “Mary Jordan did not die naturally.” The writer thinks “one of us” did it. T and T set off on the trail of Mary Jordan, but it quickly transpires that the villagers know all about her. She was an “au pair” in the house before World War One, who turned out to be a German spy. She died when the cook picked foxglove leaves instead of spinach. One of the children, Alexander Parkinson, suspected foul play, and then HE died. Foxglove leaves don’t look very much like spinach, and would probably taste foul. But they formed part of the murder method in Mrs Bantry’s contribution to the Tuesday Night Club.

I suppose people might pass down a story like this, especially if it had “got into the papers” – later in the book it’s referred to as “the Cardington scandal”. But that wasn’t much of a mystery – what now?  There are a couple of slightly odd accidents – a pane of glass falls on Tuppence, and the wheels come off a child’s cart she has taken to joyriding in. But the telling is confused. The cart is one of Christie’s old toys, and she must have enjoyed revisiting it. But it’s not clear how many times Tuppence rolls down the hill and falls off into the monkey puzzle tree.

Tuppence continues picking up fragments of chat from people she meets, while Tommy goes to London to see old colleagues like Colonel Pikeaway who fill him in on the past and mention a charismatic fascist with a bunch of acolytes: “Really the fellow seemed such a noble man. Had some wonderful ideas. Was so terribly keen to abolish all poverty.” (Peace organisations were always suspect: see Foreign Correspondent and Ministry of Fear.)

However, we are not given many details. Tommy hires an elderly researcher (Miss Collodon), and mentions newspaper libraries, but he never looks up contemporary accounts. Prewar census entries are a possible lead, but this is never followed up.

The clues are all there, but they are deeply hidden in waffle. The secret service – represented by Colonel Pikeaway, Mr Robinson and Henry Horsham, who all appear in other books – is worried that the pre-WWI fascist cell never quite died, and has re-activated. Colonel Pikeaway rambles for pages about the way current crises have their roots in the past. In 1973 the resurgence of the far right must have seemed a distant threat.

Isaac, the ancient gardener, gets murdered on the Beresfords' doorstep. The younger generation, hearing through the grapevine that T and T are famous spy-catchers, are keen to help. The kids take Tuppence to meet some pensioners, who sing World War One songs, and throw out fantastic ideas about what went on at the Laurels, even mentioning gold from sunken Spanish galleons (which featured in Raymond West’s contribution to the Tuesday Night Club). Tuppence brushes this aside, also the idea of anything being hidden in a smuggler’s cave (from Evil Under the Sun).

One of the old folk mentions “Oxford and Cambridge”. This refers to two oriental china stools decorated with swans, one dark blue, one light blue, from Christie’s old home. Tuppence has also just happened across a message in another old book that reads “GRIN HEN LO”. Backwards it’s Lohengrin, a Wagner hero famously associated with a swan. It all clearly points to the stools. One of them is broken, but in the other they find a tarpaulin-wrapped package of “papers”. But they seem to have forgotten that they earlier found some "papers" in the stomach of Mathilde, the old rocking horse.

The papers that might revive an old scandal are lifted from a short story that Christie wrote twice (The Incredible Theft), and based on a Conan Doyle tale – The Adventure of the Bruce-Partington Plans, which really does concern blueprints of a submarine. In Christie’s stories the “papers” are usually aeroplane designs, or letters that indicate a political rapprochement that the parties have since denied.

Christie’s brother Monty features in an old photograph, and his later career is touched on. Isaac reminisces about the strange things people hang on to, like a revolver brought home from East Africa by a son. In this version it’s the old lady who takes pot shots out of the window at visitors, but in real life it was Monty Miller. He had become addicted to morphine after an injury, and soon after this incident he was found a quiet cottage on the moors and a reliable “keeper”.

The old lady who hid valuables in her mittens and thought everybody was poisoning her was Christie’s grandmother. As well as "papers", inside the stool “Cambridge” there’s a rusted needle-book, and one of Tuppence's elderly informants talks about a forebear who used to buy needle-books in bulk to give to servants as presents, but hoarded them until rusty. Christie’s grandmother again, who also hid tins of sardines on the top of the wardrobe, and bought lengths of fabric at sales for maids’ dresses, but kept them until they rotted away. Christie found all these things as she cleared out her old home after her mother’s death, while her marriage fell apart. (She turned the experience into the book Sad Cypress.)

“You know, Tommy, now that you’re getting on in years you might – you might get some rather dangerous ideas about a beautiful helper."
“You don’t appreciate a faithful husband when you’ve got one,” said Tommy.
“All my friends tell me you never know with husbands,” said Tuppence.
“You have the wrong kind of friends,” said Tommy.

After Christie’s death, her husband Max Mallowan "married Barbara Hastings Parker, an archaeologist, who had been his epigraphist at Nimrud and Secretary of the British School of Archaeology in Iraq” says Wikipedia.

There are moments of clunky exposition: “Betty, our adopted daughter, went to East Africa,” said Tommy. “Have you heard from her?”

Tommy suggests adding a veranda to the house. Later, helpful young Clarence is found on the (unbuilt) veranda. Tommy suggests that Tuppence might find something in a dull old book of sermons because nobody would ever read them. She says she hasn’t found any such books – but she has, in an early chapter. Is this where she finds the "Lohengrin" message, which she just produces? And why would anyone hide a crossword clue to hidden "treasure" in a book nobody was ever going to read? Who was the message intended for?

Tommy and Mr Robinson, the “man who knows all about money”, arrange a code word – “crab-apple jelly” – but never use it.

We hear no more about the papers found in Mathilde. One is a note about a meeting in a London park, but T and T don’t even read them all. Tommy tells Pikeaway: “Tuppence thinks something might be hidden in our house”, after they’ve made this discovery. The scene is repeated later with the blue stool “Cambridge”. This time the package is passed on to the authorities, but in the last scene Tuppence says:  “And it’s all thanks to what we found in Mathilde’s stomach!”

What do Pikeaway and Horsham gain from this farrago? They are on the trail of the revived fascist cell, now lurking in Bury St Edmunds, and presumably have more clues to their past history.

There are moments when Christie is back on form. Gwenda the post office girl recounts the irrelevant experiences of a friend of hers in wartime London. “She used to love the tube. She said it was ever so much fun. You know, you had your own particular stair... You slept there, and you took sandwiches in and things, and you had fun together and talked... She could hardly bear it when the war was over and she had to go home again, felt it was so dull, you know.”

And Tommy has a pointless, but funny, conversation with a young functionary:
“Cold afternoon,” said Johnson...
“Yes,” said Tommy, “It always seems to be cold in the afternoons.”
“Some say it’s pollution, some say it’s all the natural gas they’re taking out of the North Sea,” said Johnson.

The Beresfords are still assisted by Albert, once their office boy: “You wouldn’t believe it – eggs have gone up, again. Never vote for this Government again, I won’t. I’ll give the Liberals a go.”


More Christie here, and links to the rest.