In Strong Poison, Lord Peter Wimsey meets the love of his life, Harriet Vane, in Holloway jail. He first spotted her when she was on trial for poisoning her lover with arsenic. There is a lot of circumstantial evidence against her, but fortunately Wimsey's friend Miss Climpson is on the jury, and she refuses to join the other jurors in bringing in a Guilty verdict. She manages to talk a couple of them round, too. A new trial date is set, and obviously Lord Peter is determined to find out who really dunnit...

I have an early edition of this book. Later editions have a few annoying corrections that I long to see uncorrected. Lord Peter's garrulous mother has accompanied him to the trial, and as she pops out to lunch with his friend Freddy Arbuthnot, the Duchess rambles on about other murder cases, and murderers such as Landru (who married women with a bit of money, killed them and burned their remains at the bottom of his garden). She reaches Landru via Miss Climpson's job, which is to answer shady advertisements and expose the crooks behind them. In the Duchess's monologue, Landru's victims were "really such women—born murderees as somebody says—quite pig-faced but not of course deserving it and possibly the photographs don't do them justice, poor things." In some later versions this has been "corrected" to "born murderesses". Clearly it is a word like evacuee or escapee, and they were victims, not perpetrators.

Miss Climpson, a 50-ish lady who still dresses in the fashions of 30 years previously, plays a central role in the novel. She goes undercover in a Yorkshire town something like Ilkley, and poses as a spiritualist medium in order to get her hands on a pivotal will.

"I'd no idea," said Miss Booth, "that there could be so many possible [hiding] places."

Miss Climpson, sitting on the floor, with her back hair uncoiling itself and her decent black petticoats tucked up... agreed wearily.

She coils her hair up at the back for her 1900s updo. Annoyingly, this has been altered in some later versions to "her black hair". Her hair was brown in Unnatural Death – it has now faded to "iron grey".

Lord Peter visits Harriet in prison, and she tells him how she came to live with Philip Boyes without being married to him. This was quite shocking in the 20s - the louche Bright Young Things and deliberately unconventional Bloomsburyites were only a handful compared to the masses of painfully respectable citizens. She explains that she never met Boyes' father (a vicar), and kept away from the houses of people who disapproved of her – out of respect for their feelings. And then, after a year, Boyes asked her to marry him:

I couldn't stand being made a fool of. I couldn't stand being put on probation, like an office-boy, to see if I was good enough to be condescended to. I quite thought he was honest when he said he didn't believe in marriage—and then it turned out that it was a test, to see whether my devotion was abject enough. Well, it wasn't. I didn't like having matrimony offered as a bad-conduct prize. Harriet is punning on the "good-conduct prizes" that were handed out in schools of the time, something that gets lost in dramatised and read versions. It's a question of emphasis.

And they were Styrian, not Syrian, peasants who had an interesting relationship with ... strong poison.


You heard about the actress who put the emPHASis on the wrong syllABle? Narrators of Golden Age detective fiction sometimes fall into this trap, usually because the books refer to aspects of life that have long since gone.

I had just finished making the ANCHOVY eggs. (The Mystery of the Spanish Chest, Agatha Christie) ANCHOVY eggs would be the fish’s own eggs; the character was making anchovy EGGS (halve boiled eggs; remove yolks and mash with anchovies and butter; pipe back into egg-whites).

BASEMENT area for basement AREA An area was (and still is) the bit outside a “lower ground floor" window in front.

casement CLOTH for CASEment cloth (It’s a kind of cloth, like nun’s veiling.)

CLERICAL grey trousers for clerical-GREY trousers (It’s a shade of grey, not a style of trouser.)

dark LANtern for DARK lantern (A lantern with a lit candle inside – you "darkened" it by sliding the cover round over the light.)

paper KNIFE for PAPER knife (as if it was a knife made of paper, not for cutting paper)

PICTURE hat for picture HAT (It was a hat you might see in a painting by Gainsborough, not one covered with illustrations.)

Pots-herd for potsherd (voiceover for a programme re Tuvan gold) (It's a fragment of pot, not a herder of pots.)

White DUCK suit for white-duck SUIT (Poirot is wearing a suit made of a white canvas material called 'duck', not a Donald Duck costume.)

BUHL cabinet for buhl CABINET (It’s made of buhl, you don’t keep your buhls in it.)

And readers often stumble over "wholly", "dully" and "demurred". (Whole-ly, dull-ly and de-merd. We don't demur much any more. The dictionary says it means "to express opposition".)

And “county families” is often mis-corrected to “country families”. ("They are what is called – in the country." Poirot speaking in The Hollow. County families were large land-owners who lived on the produce of their estates, and the rent from tenant farmers. County people lived in large country houses.)

Ngaio Marsh's series detective Inspector Roderick Alleyn is sometimes referred to as "an aristocrat like Lord Peter" – but Alleyn is the younger brother of a baronet, about as low down the ladder as you can get without being an actual commoner. Marsh may have created Alleyn with a nod to Lord Peter (he is horribly facetious to start with, and quotes Shakespeare constantly), but when she made him such a minor toff I'm sure that was her joke. Lord Peter as the son of a Duke is near the top of the tree. See Sir Walter Elliott in Jane Austen's Persuasion: he is ridiculously vain about being a baronet, and leaves Debrett's (the Bible of the aristocracy) lying about in the drawing room. Austen leaves us in no doubt about the naffness of this behaviour.

Fiona Bruce has just described a Scottish earl as a hunt’n’, shoot’n’, fish’n’ type, pronouncing the words in the American way. I once met some American ladies who loved Dorothy L Sayers. They thought it was so democratic of Lord Peter Wimsey to imitate the speech of the working classes by droppin’ Gs from huntin’, shootin’ and fishin’. They’d got it all wrong. This was a habit of the aristocracy in the early years of the century (and going out by the 20s). It doesn’t sound like root’n, toot’n, shoot’n, you pronounce the I. Arriving at the Royal Opera House, Covent Garden, a posh bloke asked his wife: “What are we here for, Araminta? The singin’, or the dancin’?” (The opera or the ballet?)

Review of Murder Must Advertise here.


I hate Facebook! It emails me every time one of my friends changes their status! And every time a total stranger wants to be my "friend"!


So turn off notifications. 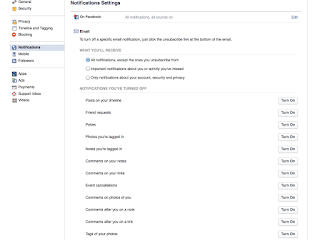 5. Turn everything to OFF.


And those uplifting messages with pictures of sunsets? Click on the down arrow in the top righthand corner, and select from the options (eg, "Hide this post/see fewer like this", "Hide all from the Dalai Lama").

And you can do it on LinkedIn too: 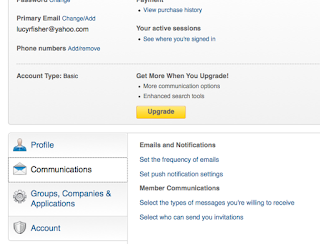 Go to your profile settings. Select Communications. Select "Set the frequency of emails".