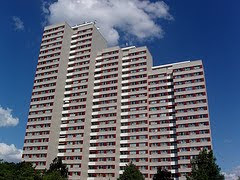 ALCOHOL
Andy Irons was a “flamboyant and mercurial surfer who won three world titles and was regarded as the best of his generation. There was a classic malcontent, rebel-without-a-cause side to him and he admitted to "inner demons" and a self-destructive streak.” Independent 2010 (Drink, drugs.)
dark side = drinks heavily
off the rails wild child wild man of rock
Lots more alcoholic euphemisms in my ebook:
Boo and Hooray: Dysphemisms and Euphemisms

ARCHITECTURE
regeneration is the new "development". It doesn't mean restoration, it means knocking down nice stuff and building crap stuff, as usual.
Pathfinder = slum clearance (@HughPearman)
what we need in our streets = gentrification, obviously @owenhatherley commenting on the Stirling Prize for architecture

BEAUTY
You have your nose “thinned”, never shortened.

MONEY
The antiquities market is incredibly strong at the moment. = antiquities are fetching high prices
a purchase made “on finance” = you borrow the money and have to pay interest
hard-working families = taxpayers
reform cuts
restructuring = restructuring funding

WHAT THAT REALLY MEANS
crazy I looked Fred up on YouTube, and I was like, ‘Oh my God! He’s, er, crazy!’ ” Crazy, of course, is a euphemism for wildly annoying... Pixie Lott in the Times, Dec 2010
unusual I can recall several editors mentioning to me early on that wrongness was an “unusual” topic for a first book. A year or so into the project it finally dawned on me that by “unusual” they meant “insane”. Kathryn Schulze in G 27/11/10
I don't expect the sack, says Carlo Ancelotti, for which read, "I will be sacked soon." @franosch

challenging terrifying
concordant patient compliant patient
creative industry advertising
creatives people who work in advertising
difficult/strong character = bully
embayment (of Norfolk coast) flooding
emotive, emotional = emotions that lead people to do or think the wrong things.
establish clear boundaries = establish clear boundaries for acceptable behaviour, ie tell people they can’t go on being nasty to you
exercise poor judgement/make bad choices American for “go off the rails” – drink, take drugs, get pregnant at 14
forceful style, feisty abusive, angry outbursts
language swearing, obscenity (a film may be flagged “contains mild language”, ie mild swearing)
lash out meek, mild person loses it after putting up with years of bullying. They then become the problem.
learning differences learning difficulties
micromanage boss
other cultures right-wingers such as the CSU’s Horst Seehofer want to stop all immigration from “other cultures” – code for Turks and Arabs
regret cancel (There can be no substitutions for guests who regret.)
revisit for reconsider (we shall revisit that decision)
save the planet = save humanity
security firm bodyguards and spies
stand by (your husband) = put up with his infidelities
strong language swearing, obscenity
teem/teemed with = abounded in people we don’t wish to mix with
thick, heavy accent accent with associations we don't like (we neither approve or disapprove of a "strong" accent)
variety meats = offal (sweetbreads = testicles, pig’s fry = testicles)
views are becoming polarised = people are going to start being rude to each other if they haven't already
We landscaped the garden completely = we removed all the plants and trees and replaced them with paving, gravel, paths and steps
You're taking this much too seriously = You've taken what I said to its logical conclusion and made me look absurd/I am losing the argument.

More euphemisms here, and links to the rest.
Posted by Lucy R. Fisher at 22:14 No comments: 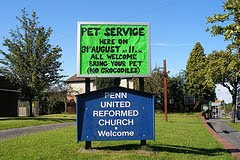 Are you following the Maker’s instructions?
Beware of the dogma.
Carpenter from Nazareth seeks joiners.
CH..CH – what’s missing? UR
Come in for a faith lift.
Don’t let worries kill you – let the church help.
Get a life.
Get right or get left.
Keep taking the Tablets.
Moses was once a basket case.
Read the Bible – it will scare the hell out of you.
Seven days without prayer makes one weak.
Souled out.
The Ten Commandments are not multiple choice.
Thou shalt not walk on the grass.
Trespassers will be forgiven.
Under the same management over 2,000 years.
When you can't sleep, don't count sheep, talk to the shepherd.
Wireless access to God with no roaming fee.
Yes, we're open on Sundays.

Beat Generation scholar "My favorite of the bunch is Regina Weinreich, who is identified as a 'Beat generation scholar'. While it’s no secret that the academic racketeers can turn just about anything into a “discipline,” Weinreich’s job description struck me as particularly delicious. Here is a woman who was canny enough to hitch her professional wagon to the Beat caravan more than 20 years ago." millions.com

converter of cupboards under stairs into groovy secret rooms behind bookcases

dealer in saint’s relics (and reliquaries) (or other arcane antiques)

Find out who left a trust fund and a Georgian townhouse/country mansion for the continuation of some batty little society (electoral reform, psychic research, Ouspenskyism) and apply for the job of managing director, librarian etc.

maker of bondage suits and equipment

troll FB for targets to burgle

wedding banquet scalpers (like ticket touts, they buy up the slots in all the favourite venues at the favourite times, and then offer them for sale to desperate couples – at a premium)

write “how to write books” books short story writer Richard Bausch describes meeting a couple who edited a struggling literary magazine and funded it by publishing a never-ending stream of how-to manuals for would-be writers. salon.com 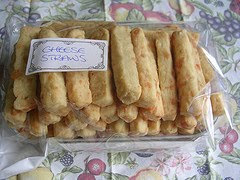 ...are worth borrowing. More here, here, here and here.

A Hail Mary pass or Hail Mary play in American football refers to any very long forward pass made in desperation with only a small chance of success, especially at or near the end of a half.

Barnes has all the charisma of a cheese straw. Anthony Quinn in The Independent Dec 2010

Bath is a perfect storm of heritage kitsch. @richardbratby

doughily self-important Wendy Ide in The Times on Russell Crowe

Her metaphors are so bad, they make you cry out in pain. Rachel Cooke Observer Dec 2010

It bleakens the place even more. @quantick

It's extraordinary how quickly the water closes over the head of even the most eminent and influential person once he has died. Sasha Lubetkin

Sentence in an over-earnest cookery book I'm using: “It is important to buy fish responsibly.” @tomroper

Several pedants broke loose from their chains (when someone used "data" as a singular). idiotic.hat.blogspot.com

someone with quicksand-like ways They bring you down/put you down. www.urbandictionary.com

sousveillance recording the police on your mobile

The garden stretches to Stoke on Trent. Martin Roberts Homes under the Hammer 2011

With some of the fancier Crossrail station designs being crimped back for financial reasons londonist.com
Posted by Lucy R. Fisher at 07:31 No comments: 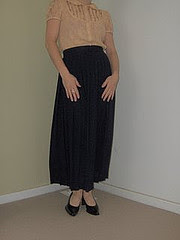 fey whimsy The Return of Common Sense How the Great Recession has changed architecture—for the better. By Witold Rybczynski Jan. 13, 2011 Five years ago, I wrote an essay for Slate about Mexican architect Enrique Norten. I characterized Norten, whose work I admire, as belonging to the rationalist tradition of Modernism. I also observed that, judging from some of his recent designs, he was succumbing to pressure to produce increasingly unusual and startling buildings more along the lines of the Expressionist anti-rationalism of architects such as Libeskind, Hadid, and Mayne. "It would be a shame if Norten were pulled in this direction," I wrote. "The theatricality weighs uneasily on his unsentimental and tough brand of minimal modernism." Well, he was pulled. In the following two years he designed a number of gyrating skyscrapers whose fey whimsy rivalled the anti-rationalists. Thankfully, none were built—the Great Recession saw to that. slate.com

high-minded (explains so many people)

sharp-elbowed The middle-classes – always elbowing each other out of the way in the fight for school places etc.

trite, tedious etc Based on the bestselling book by Elizabeth Gilbert, Eat Pray Love stars Julia Roberts as Liz, a recently divorced travel writer who embarks on a journey of self-discovery through Italy, India and Bali. The movie is essentially 140 minutes of “wearisome, trite and questionable” psychobabble that entirely wastes Roberts’s talents, said Nigel Andrews in the Financial Times. The film is “packed full of tedious New Age gobbledegook and the sort of moral platitudes you see on car window stickers”, said Matthew Bond in The Mail on Sunday. “British audiences, and male audiences in particular, will find its very American navel-gazing desperately trying.” September 28, 2010 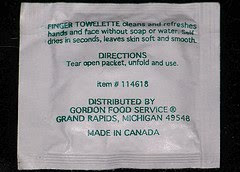 [sic] Latin, it means something like “just so”. Journalists add it after a verbatim quote that uses words incorrectly, to show that it’s the speaker’s mistake, not theirs. Private Eye adds it after something sickening, following Dorothy Parker, who wrote: “Sic. Sic as a dog.”
Posted by Lucy R. Fisher at 00:10 1 comment: