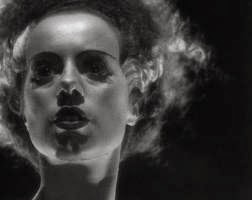 Doctor Pretorius (played by Ernest Thesiger)
was a Paracelsian who kept his homunculi
imprisoned in glass belljars; when they knocked
with tiny fists upon the glass it rang
like toy telephones: this in The Bride of Frankenstein
in which the Bride (the Monster's of course: Frankenstein's
bride was played by Valerie Hobson who later
married a British Cabinet Minister named
John Profumo, which is strange but not relevant)
was played by Elsa Lanchester who in 'real'
i.e. off screen life was married to Charles Laughton
who was Quasimodo in the second Hunchback
of Notre Dame and Doctor Moreau in The Island
of Lost Souls in which the Leader
of the Beast Men was Bela Lugosi who
(need I say it?) played the title-role in the original
Dracula in which Renfield the madman
who ate flies was Dwight Frye who acted
the malignant hunchback who in Frankenstein the first
selected the wrong brain for the poor Monster
(doomed from the start) who was played
by Boris Karloff who was played by
a very gentle Englishman named
William Henry Pratt.

Ash in the crucible revives
Roses and monsters hover in the mind.

Thrice toss these oaken ashes in the air,
Thrice sit thou mute in this enchanted chair,
Then thrice three times tie up this true love's knot,
And murmur soft "She will, or she will not."

Go burn these poisonous weeds in yon blue fire,
These screech-owl's feathers and this prickling briar,
This cypress gathered at a dead man's grave,
That all my fears and cares an end may have.

Then come, you fairies! dance with me a round;
Melt her hard heart with your melodious sound.
In vain are all the charms I can devise:
She hath an art to break them with her eyes.
Thomas Campion

The Least Loved Beast
The lupin is a lovely flower,
From which our forebears would recoil,
Believing that it might devour
The yielding and defenceless soil -
From 'lupine', wolf-like, seeking prey;
so think, this sunday afternoon,
When basking by that bravedisplay,
Of creatures howling at the moon.

We fear the wolf. The very name
Suggests red eyes behind a tree
And horror movies that proclaim
Their subject is lycanthropy.
A wolf in clothing worn by sheep
Is what the righteous most abhor,
While those whose debts mean loss of sleep
Hope they can keep it from the door.

Few hunters stalk on swifter feet.
His mind is sharper than the rest;
But when he kills, he kills to eat,
Not for a medal on his chest.
Take all the books that line your shelf,
Read history since the world began:
The wolf is gentleness itself,
Beside the savagery of Man.

MONEY, TRADE
ONO (or near offer)
grand total
lather, rinse, repeat
X and Co
for all your... needs (Ark hotel - for all your global warming apocalypse vacation needs.  @laurenbeukes)
all mod cons
…and you’ve got the set!

SPORT
retire hurt
Saved by the bell (that signals the end of the round)
Game over.
game, set and match (the other person really has won)
won in straight sets
Well played, sir!
gone to ground

GAMES
Do not pass Go.
Get out of jail free.
when the music stops
in spades
in spades redoubled
the ace of spades reversed
Light blue touch paper and retire.
Come in, number six, your time is up. (From lake with numbered rowing boats.)

MEDIA
But that’s another story.
End of story.
Now read on.
New readers start here.
…with charts
That’s not what it says in the brochure.
Watch this space.
slow news day
This just in!
In other news…
It says here.
That’s not in the manual.
What’s wrong with this picture?
Here be dragons (from 16th century map)
Back to top

THEATRE
dramatis personae (or dram. pers.)
Worth the price of admission alone.
Could go on without rehearsal as (the Missing Link)
What do you think of the show so far?
I’m getting my act together and taking it on the road.
Pause for laugh.
returning by popular request
Behind you!
Oh, yes it is!
She's in the cupboard!

FILM
There will now be a short intermission.
That's all, folks!
This is where we came in.
Cut, print it!
Lights, camera, action!
Coming soon to a theatre near you.
After the show, why not…?
Run, don’t walk, to the nearest exit.


FORMS
sign on the dotted line
...or all of the above
[insert name here]

TV/RADIO/PHONE
And now back to our scheduled programming…
You can’t say that on daytime television!
There has been a slight technical hitch. (Not heard since 1955.)
We'll be back right after this message.
Can I phone a friend?
Are you receiving me?
Receiving you loud and clear.
Are you receiving, over?
Wilco, Skipper
Come in, Blue Leader!
Bandits at two o’clock.
Your two minutes are up.
Answers on a postcard, please.

SCHOOL
Have you got a note from your mother?
Take notes, I’ll be asking questions later.
I’m not angry, I’m just very disappointed.
You’ve let the whole school down, you’ve let me down, but worst of all, you’ve let yourself down.
There’ll be a short quiz at the end of the session.
I’ll be taking questions later.
Breaktime over!
Are you keeping up at the back?
Write on one side of the paper only.
Discuss.

OLD PUNCH JOKES
Collapse of stout party!
Parts of it are excellent! (Good in parts – like the curate’s egg.)

TRANSPORT
Everybody back on the bus!
If it’s Thursday it must be Belgium.
Direction of travel
Mind the gap.
Stand clear of the doors please.
Pass right down inside the cars.
midcourse corrections

LAW
Will it stand up in court?
I put it to you...
Me lud, the defence rests.
Sensation in court
Court is now in recess.
The court is now in session.
Objection! Irrelevant!
Can we take a side-bar?

SPIES
Don’t look now, but I think we’re being followed.
Listen very carefully, I shall say this only once.
Leave it in the usual place, behind the hot water pipes.

EVERYDAY LIFE
When I were a lad all this were fields/forest/sand dunes (delete as applicable).
We had to make our own entertainment.
What fun we had.
Step away now./Step away from the...
Get over it!
He threw all his toys out of the pram.
Moving swiftly on...
Don’t all speak at once./One at a time, please. (When nobody volunteers.)
How ****** is that?
lost down the back of the couch (commonsense, sense of proportion etc)

LITERATURE/MELODRAMA/FILMBe still, my beating heart!
our hero
gentle reader
For it is he!
Strange to relate…
It’s all coming back to me now.
Back to the plot.
Come back, all is forgiven.
Fly at once, all is known.
Dead, and never called me mother!
Take them away, guards!
Smiling, the boy fell dead.
More tea, vicar?

RELATIONSHIPS
It’s not you, it’s me.
You’re no fun anymore.
I need my own space.
I love you too.

THERAPY
I feel your pain.
Humour me!

ADVERTS
What does A do now? (Itself a parody of “Dear Marge” etiquette columns)
They laughed when I sat down at the piano… (but when I started to play!)

DISCLAIMERS
Contents may settle in transit.
Contains lanolin.
I am over 18.
Your mileage may vary.
No parking except on even dates. 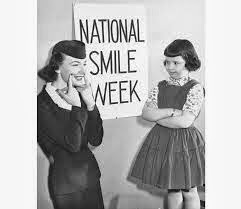 Just be yourself... (continued)

We think if we learn to cook, remember to ask how people’s weekends were, and wear contact lenses, then everybody will like us. We think if we don’t sleep with them for a month then they’ll fall in love with us. (Eva Wiseman Obs 2013-07-21)

I’ve recently been experimenting with answering ‘fashion’ rather than ‘politics’ when men casually ask me what I write about, and the result has been a hundred percent increase in phone numbers, business cards, and offers of drinks. (Laurie Penny)

Who you hang out with, whether you're a fish or not, matters to your own safety and survival. In a community, a herd or a shoal, the other individuals around you affect how you're perceived. You don't want to be the fattest zebra or the most attractive guppy. Sometimes, you just want your group to have your back. (Ed Yong December 7, 2011)

The ability to evaluate and regulate the effects we have on other people is part of a fine awareness of our selves. If we stop thinking about those effects, if we stop caring, we are not expressing the freedom and wonder of our selves, but limiting them. (Henry Hitchings in Sorry! The English and Their Manners has his cake and eats it.)

If someone wants you in their life, they’ll make room for you. You shouldn’t have to fight for a spot. (marcandangel.com)

Pouting a lot, playing dumb, deliberatively pronouncing long words – the whole routine. I didn’t mind, even when she crinkled her nose in girly indecision, or popped her eyes in cute astonishment. (Martin Amis, The Rachel Papers)
‏
Mention a time limit to the conversation so that people don’t feel trapped. Smile, and tilt your head to one side with your chin down. And “manage your expectations” – ie lower them. (farnamstreetblog.com, paraphrase.)

Don’t shack up with the first person you meet. (Nicolas Lezard on life after divorce, Times July 6, 2013 You have been warned.)

She handed me a paperback… “Read it,” she said. “It’s a very beautiful book.” I flipped through. Four hundred pages of hippie sententiousness. (Martin Amis, The Rachel Papers)

I was usually too diffident to do the wooing. It was partly down to Seventies feminism and the suggestion that any man doing the inviting and the cajoling was a sexist pig. Less was sometimes more (though it was also, disappointingly, often less). So I listened and laughed my way, where I could, into the affections of the comradesses and waited for them to declare their affections. Some waits were eternal… (David Aaronovitch, Times 2013)

X was utterly in awe of himself.

Poor devil - still waving proudly to a parade which had long since passed her by. (Sunset Boulevard)

Relentlessly cheerful attempts to ingratiate herself. (imdb on Millie in Three Women)

Inspirational Quotes Part 41, and links to the rest.
Posted by Lucy R. Fisher at 14:23 1 comment: 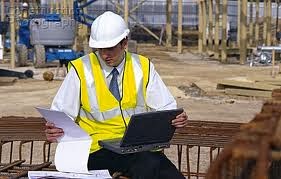 At weekends I do standup

You can do anything you want as long as you want to enough!

They go to Edinburgh expecting to leave as the... most hilarious comedian since Peter Cook, but they leave knowing the career in quantity surveying now awaits. (Simon Hoggart, Guardian, Aug 23 08)

I suppose cabin crew, athletes or whoever else relies on their appearance for their living all have the inevitable early sunset ahead of them in their minds. (imdb.com)

She becomes aware that the radius of action is small and pitiful (Another Playboy centerfold? Another run of Rock Hunter?) (imdb.com on Jayne Mansfield)

torpedoed any chance of a career (Some standups did by sneering at Susan Boyle, says standup in The Guardian.)

Inevitably many students of limited talent spend huge amounts of time and money pursuing some brass-ring occupation, only to see their dreams denied. (Web)

Is this the fulfulment of a dream or a monumental vanity project? (Andrew Billen, Times Oct 15 08)

The price of living in LA kept going up and my options as an actor felt as if they were getting smaller and smaller. (Mark Ruffalo, Sunday Telegraph, Feb 27 11)


Happy individuals act differently from others, and this can lead to activities and reactions from people that in turn encourage more happiness. (The Psychologist)

Touching one's face signals anxiety. Improve your posture. If you're constantly hunched over or touching your face, you'll never look confident, approachable or at ease. (wikihow.com)

Criticising people, winding them up, making idiots of them or fooling them doesn’t make people with autism laugh. (Naoki Higashida)

‏He's not my boyfriend. He's just somebody I'm... trying on. (Carrie Bradshaw)

Because English people like to think they are independent, they often get angry with people who give them orders. (english-online.org)