Death at the Dolphin, by Ngaio Marsh 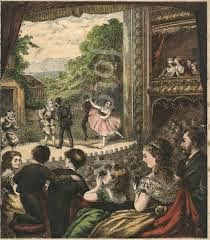 This is in my top three of Marsh’s novels (the others are Opening Night and Clutch of Constables). It doesn’t feel very 1967, but can she really have been 72 when she wrote it? It has a youthful feel, and the main characters are in their 20s, early 30s or 40s. She wisely doesn’t attempt to add Swinging London colour or slang. Spoilers alert!

Peregrine Jay is a young theatre director who loves Shakespeare. He is hanging about outside a derelict Victorian theatre in “Wharfinger’s Lane” near the docks. He has heard it’s for sale and gets an “order to view” from the agents. A friendly local helps him turn the key in the door and warns him about bomb damage. Inside, the place is falling to pieces, but a shaft of light hits the stage. He climbs up to stand in it and imagine the sinister ruin brought back to life – if he only had the cash! Forgetting the advice about the damage, he steps backwards into – nothing!

He finds himself chest high in cold water, clinging to the broken edge of the stage. He shouts for help. How long will it take the estate agents, or the friendly local, to come and look for him?

It’s a great dramatic start to the book. And then the plot thickens. He is pulled out of the hole by – an oil millionaire who has bought the theatre and just happens to be passing. (The friendly local was the deus ex machina.) The millionaire, Vassily Conducis, takes the soaked Peregrine home and offers hot baths, hot toddies and clean, dry clothes. Peregrine wonders about the man’s motives (it’s 1967, and homosexuality is about to become decriminalised). But Conducis, although oddly quiet and inhibited, only wants to help.

But then he reveals the McGuffin upon which the plot hinges – a glove possibly made by Shakespeare’s father for Shakespeare’s son, that he has mysteriously acquired. He offers to bankroll Peregrine’s plans for the theatre, and sends him home in a taxi.

Peregrine arrives back at his flat, which he shares with a theatre designer friend, Jeremy, wondering if it’s all been a dream. But next day he gets a call from Conducis’s agent...

To open the theatre, Peregrine writes a play about Shakespeare, and he and Jeremy have fun casting it with a set of actors who are known to be tricky, and to be swapping partners among themselves. A Fenella Fielding-like leading lady, her boyfriend who happens to look just like Shakespeare, a rough diamond who is the “fair man” of the Sonnets brought to life, an infant prodigy to play Shakespeare’s son, a young girl with whom Perry falls in love... The helpful local is hired as nightwatchman. All the characters are brought vividly and sympathetically to life by Marsh.

The glove is put on display in the lobby, and Marsh’s series detective, Roderick Alleyn, comes along to check on the security arrangements. He’s also invited to the opening night party. And when the glove is nicked, and one of the crew is murdered, naturally he is called in and the investigation gets going, with most of the characters under suspicion, and revealing more about themselves than they meant to. They are so well-drawn – it’s a joy to spend time with them, and their banter really is witty.

So what is 1967 about this book? The women are not wearing the way-out fashions of the late 60s. The older cast members openly have affairs – but this is the theatre. Actors had affairs in Marsh's books written in the 40s and earlier. The younger characters are rather shy and conservative. And romantic! London life goes on without much input from the Permissive Society. (It always seemed to be happening somewhere else.) Nobody smokes dope. I don’t think even Emily (the ingenue) wears a miniskirt.

I love the atmosphere – of a London aware of its history, and still grimy and semi-ruined, 20 years after the war. That’s how I remember it. A sense of place was one of Marsh's strong points: she puts us in the two boys’ bachelor flat (on the south bank, where they can just see the Dolphin Theatre); in the refurbed theatre itself, with Victoriana lovingly restored; in Conducis’s mews house full of antiques that minions have chosen for him. (In 1967, despite space-age fashions and determined modernity, it was becoming quite respectable to like Victoriana.)

The book has one, glaring, flaw. By 1967 you’d expect the casual anti-Semitism of Golden Age detective story writers to be a thing of the past. Sadly, no. There is an older character called Mrs Guzman, mostly offstage and appearing in others’ accounts. Her portrayal is unsympathetic, to say the least - complete with heavy accent. Only dear Inspector Fox has some pity for her – or is it the theatre's business manager, Winter Morris?

The audio version is beautifully read by James Saxon.