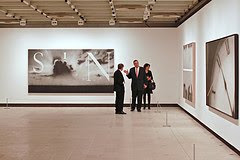 Ed Ruscha, b. 1937, studied at the Chouinard Art Institute. In 1956, he left his home in Oklahoma City and drove to Los Angeles, where he stayed. His work is full of the vast emptiness of the USA, highways flanked by industrial units behind chainlink fences, gas stations, advertising billboards with aggressive type. And LA, which he calls a "cardboard cut-out city".

This is a retrospective of 50 years of his work. He started off by painting blown-up words on bright backgrounds, like the "Annie" from the Little Orphan Annie comic strip. He moved on to slogans against scenery, in a utility typeface he designed himself. Sometimes the slogans involve everyday substances, like IT'S ONLY VANISHING CREAM or SAND IN THE VASELINE. He was also experimenting with creating images using anything rather than paint.

He mutated to using a spray-gun to create what looks like LA seen from the air at night, or landing lights on an airstrip. A slogan against this background reads: WEN OUT FOR CIGRETS N NEVER CAME BACK. 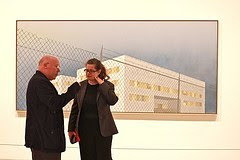 Some spray painted canvases have no words. There's a shadowy howling wolf, a galleon, a lonely house. They're like motifs from a cross-stitch kit blown up and given a Gothic twist.

Still in black, grey and white, he plays with cinema EXIT signs, or a high window in what could be a warehouse or barn.

THE END in Gothic script appears on a slipping frame of degraded movie film, with scratch-lines and hairs.

Industrial buildings change function, their original owner's name painted out and a new one emblazoned in red. He says: "I simply observe the cruelty of progress."

Check out MY AMAZON BOOKSHOP.
Posted by Lucy R. Fisher at 20:04 No comments:

Miroslaw Balka: How It Is

This is the latest in the Unilever series of installation's at Tate Modern's cathedral-like Turbine Hall. It's a big metal box like a giant shipping container filled with darkness. Turbine Hall art is a new genre. It's got to be big and overwhelming. The dwarfed visitors/worshippers become part of the art.
Many religions include visits to a mocked-up Underworld, a dark underground space, a crypt, West Kennet Long Barrow, the Mallabar Caves. And art's meant to be a quasi-religious experience these days. Or is it a fairground attraction? Victorian London was full of "shows": Frith's Derby Day, General Tom Thumb, mind readers, the Hottentot Venus. If you set up an attraction and advertise it, people will come. Roll up, roll up, see the wonder of the age!

If art's a quasi-religious experience, there are too many of them. We're always being pushed to respond. If we do, how sincere are we being? Maybe that's the point - to confront us with our own lack of integrity.

Visitors to How It Is have complained that the crowds of children and tourists ruin the atmosphere by chatting and flashing their mobile phones as they take pictures of their mates groping around in the dark.

You approach with other pilgrims (like the ones who are visiting the bones of St Therese of Lisieux). The lights get dimmer as you walk down to the end of the hall. The "box" echoes the grim industrial style of its surroundings.

You climb up a ramp and walk forward into the dark and it is truly frightening. Yes, you're surrounded by chirping children - or are they twittering ghosts? What's spookier than the laughter of unseen children? Just when the darkness reaches pitch pitch, you bump into the back wall. When you lean against it, you hear a booming rumble. Turn round and you can see the light, and silhouettes of children walking happily into the dark. Turn back again and you see a crowd of ghosts.

Here in this truck, I, Eve, and my son Abel

Frank Auerbach
Auerbach's paintings of building sites from 1952-1962 were on show at the Courtauld. Much of London was being rebuilt after the extensive damage caused by war-time bombing. Architects were getting an opportunity to turn ambitious, daring, visionary ideas into reality – at least I'm sure that's how they'd have put it. Thank goodness the money ran out (or else bureaucracy stepped in) and they didn't destroy absolutely everything that Hitler had missed. Many of the buildings were misguided, but there's always something beautiful about a building site, and Auerbach was there to capture the abstract patterns made by scaffolding and London's lovely yellow mud.

The paintings are done in thick oil paint, sometimes so thick as to turn the canvas into a relief sculpture. It has been "worked over" strenuously, something our tutors circa 1970 thought was a praiseworthy activity (keeps the students occupied). The paint has been tortured, smeared, scored and dug, and looks very like the mud of excavations, complete with spade marks and tire tracks. The evidence of hard physical labour is everywhere. There's nothing girly about these paintings. They are also quite big, another thing our tutors liked. In their eyes, a painting below a certain size simply wasn't a painting.

Don't get me wrong, I like these paintings, especially a sketch where the paint has suffered less abuse. And timber balks, tire tracks, steel skeletons, empty windows, digging men all make satisfying patterns. But it looks destruction as much as building. The dark, muddy, foggy colours add to the feeling of sadness. See more Auerbachs here.

You can move on from the galleries where the Auerbachs are hanging into the Cortauld's permanent collection. Here are Art Deco Kandinskies and highly coloured works by Derain, Jawlensky, Bonnard, Braque and Matisse. Who has real talent, and who is imitating fashionable mannerisms? And there's a Boudin of a beach that's about the size of a postcard. I'd call that a painting.

Steampunk
There's an exhibition of steampunk objects at the Museum of Science, Oxford, that runs until Feb. 21, 2010. "Steam punk" is a literary genre that imagines a world that's a cross between the 19th century and now. It has all our wizard inventions, but they're made with Victorian technology and style. Lots of steam, hydraulics and brass. 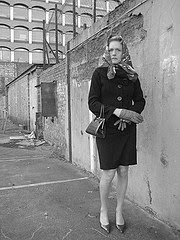 Grayson Perry
Pots and a tapestry by the Turner Prize winner are on at the Victoria Miro Gallery until Nov. 7. Perry's beautiful pots are covered with line drawings of scenes that look superficially like illustrations from a 30s children's book. Look closer, and you'll find that they are much more subversive. Perry likes to cross-dress, and turns up to gallery openings as his alter ego Claire, a little girl who wears elaborate puff-sleeved dresses. The dresses are part of his art.
The Victoria Miro Gallery is a lovely converted warehouse near the Angel, Islington, with a peaceful water garden. It's quite a long walk from Angel, though you can take the canal path for some of the way. Grayson Perry is at the top of several flights of steep, steep stairs. Dear Victoria, is there room for a lift?

The main exhibit is the Walthamstow Tapestry, which takes Man from birth to death. You can see the influence if Indian embroidery, African naive paintings, cartoonist Michael Heath, medieval Doom paintings, Alan Aldridge, Terry Gilliam, London Transport picture maps, Breughel. Everywhere people are surrounded by brand names - Andrex, Waitrose. Bloated chavs in track suits push baby buggies, nice middle class people fly vintage aircraft. Al end up at a red devil's mask. A banker poses like a saint, holding a chalice of claret. A woman in Hermes headscarf and clutching a Chanel bag stands in for the Madonna. The tapestry's not hand sewn, unlike the rather similar work of Dutch artist Tilleke Schwarz.

On the opposite wall are two large drawings. One shows a map-like landscape dotted with buildings that have escaped from a history of architecture. All trees are dead and shattered as if with shell-fire. Labelled groups of people survive among the ruins, dance round maypoles, drink tea by ambulances, fight doomed last stands. Everybody is here: conservationists, elitists, the middle class, satanists, classicists, Mormons, neo-pagans, snobs, transvestites, cool people, wankers, amateurs. Nobody is spared, it's no go the merry-go-round, it's a medieval Dance of Death, no-one was saved.
A companion piece shows the artist, crucified on a Renaissance Mappa Mundi. His insides are labelled with the detritus of modern life: Quaker vegetarian chatter, preachy logo board, kidults, internet dating. Long may he reign.

The Museum of Everything
This gallery has just opened in North London, to showcase work by "outsider" artists - people without formal training, who had a different outlook on the world. Its first exhibition includes work by Henry Darger, who worked as a janitor in Chicago. In his spare time, he produced an endless frieze about the heroic Vivian girls, who seem to be traced from children's books and frequently appear nude.

He had a wonderful sense of composition and colour. The little girls have adventure after adventure, battling evil wherever they go. The epic they star in is titled: The Story of the Vivian Girls, in What is known as the Realms of the Unreal, of the Glandeco-Angelinnian War Storm, Caused by the Child Slave Rebellion. Darger grew up in a severe children's home which he escaped after several attempts. Grayson Perry acknowledges his debt to Darger's work, which was discovered by his landlords shortly before his death in 1973.

Click on the show's title above and it'll take you to a review in the Times by Waldemar Januszczak. The show is about the devil's bargain between art and the market since Andy Warhol, who kind of invented the whole idea, or did he? Art has always been a market. It's just that, in order to sell you pictures, you used to have to pretend to have a mind above such sordid things. Fashions change, and now you're supposed to be blatant about it. But is the art that results any good? Not so sure about that. Apart from the Andy Warhols. He's represented by some paintings of Gems that glow in ultraviolet light.

The rest is brash, ugly, crude, over-the-top, and screams "Me, me, me!" Or perhaps "Buy my stuff and make me very very rich!" It's not really recession art.

Says Waldemar: I should quickly add that I don’t mind most of the seedy sex in which this show is so rich. It is about time goody-goody Tate Modern risked upsetting some vicars. Those who think unsightly sex has no place in a gallery should address their complaints to the ancient Greeks and Romans who pioneered its presence. Art’s dubious relationship to pornography has 2,000 years of tradition behind it. The question is not: does showing Fraser having sex with a stranger constitute an appropriate offering for Tate Modern? The question is: does it constitute good or meaningful or instructive art? I don’t like the piece. It’s creepy and showy. But you could hardly ask for a clearer presentation of the exhibition’s central conundrum: if you make art about selling out, are you yourself selling out? In Fraser’s case, the answer is surely a loud yes. If she were ugly, if she were shy, if she hadn’t been ambitious, she wouldn’t have made the work.