Ballad on Approving of the World 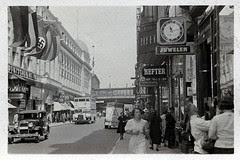 I'm not unjust, I’m not courageous either.
They pointed out their world to me today
I saw the bloodstains on the pointing finger
And quickly said “I like my world that way”.

I stood before their world, beneath their truncheons,
And spent the whole day judging all I saw.
Saw butchers who seemed suited to their functions,
And when they asked, D’you like it? I said 'Sure!'

And from that instant, my professed opinion was:
Better be a coward than in your grave!
To keep from falling under their dominion,
I kept approving what one can’t approve.

I saw the cops and landlords profiteering;
With hollow cheeks, the people doffed their caps.
I tried their wheat, and told all within hearing,
'Top quality, a little dear perhaps.'

Then the industrialists - such crippling losses.
They can't find work for more than one in three.
I told the other two, 'You'd better ask your bosses,'
I'm ignorant about economy!

I saw the soldiers preferring guns to butter,
And planning whom to murder and to rob!
I called out as I stepped down in the gutter:
Credit where credit's due, they know their job!

Saw Civil-Servants green with mildew keeping
Their great big mobile dungheap-shifter on the move.
So poorly paid for bullying and creeping;
I really hope their salaries improve!

I saw the teachers, those poor flagellators
Imposing their own image on the young
That’s what they get their stipends from the state for
Or else they have to starve, so you should hold your tongue!

And children seen in early adolescence
Whose brains are eight and bodies eighty-three
I say “that’s life” – to the unspoken question
“Why’s life like that?” I answer “Don’t ask me!”

And the professors, whose impressive phrases
Excuse the deeds of those whom they support
Crime wrapped in talk of economic crises
Let no one say they’re any worse than I had thought!

That tradesman there, assuring all and sundry
'It's not my fish, but I who really smell!'
Won’t eat bad fish himself, so let’s all get to know him
And hope that he may find us fit to sell!

Doctors who throw back every hard-up patient,
Like anglers throwing back a too-small fish,
I can’t avoid, and lay my sickly body
upon their couch to carve up as they wish.

I saw the murderers and the victims also,
And with a bleeding heart and failing nerve,
Saw how the murderers singled out their victims
and shouted 'I approve - without reserve!'

I see them coming, see the butchers marching,
Would like to call out 'Stop!', but since, meanwhile,
I know their agents are behind me watching;
I hear my own voice calling at them 'Heil!'

Since poverty and baseness leave me cold
My pen falls silent; times are on the move
Yet all that’s dirtiest in your dirty world
Includes, I know, that fact that I approve.

Posted because I couldn't find Brecht's words exactly as Robyn Archer sings them (other translations seem rather inadequate).