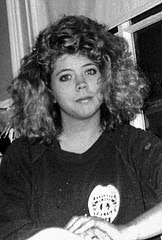 The 80s are being sold as a decade of big hair, big shoulder pads, city boys with red braces, Thatcher, boom years, yuppies. That wasn’t my 80s.

My 80s were a decade of rigid fundamentalism. John O’Farrell’s Things Can Only Get Better tells it like it is. He ponders forming a “Lefties Anonymous” where people stand up and testify “I was ridiculously left-wing in the 80s!”. He confesses that a friend of his decided that smiling was right-wing, and he himself even thought flowers were right-wing. Yes, that captures the flavour. 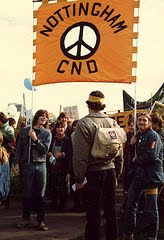 And while we were grimly attending political cabarets and miners' benefits, girls in snow-washed jeans were dancing to Duran Duran. We were supposed to be all working together to create the perfect world – but we weren’t allowed to have any fun. And the time has come to say: Get a life! Lighten up!

And what was the point of it all? The project was never subjected to Blairite management targets, mission statements, box-ticking, defining outcomes, metrics, audit of whether outcomes met.

Eighties Relationships
The Eighties Continued
Quotes about the Eighties
Eighties Decor
The 10 80s Commandments
Posted by Lucy R. Fisher at 08:45 No comments: 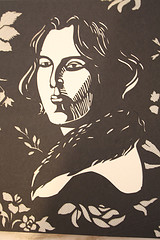 Oscar Wilde said that the English didn't have the word "longueur", but they had the thing in great profusion. There are some concepts we have no words for, so we borrow from the French, the Italians and the Germans. There's even a word for them: "missing terms". Why don't we have our own words for these things? Perhaps we think that if they have no names they'll just go away...

agent provocateur A disguised policeman who incites someone to commit a crime.

à la mode In the fashion.

canard Factoid.
donnée What the Americans call a "given" – something you take as read.


heure gris Moment in the day when everything always starts going wrong.

idee reçue One of those "facts" that everybody just "knows".


mauvais quart d’heure Those terrible few moments when you reach for your handbag and find it gone – before you remember you left it in your hotel room.

monstre sacré Person like Lady Catherine de Burgh in Pride and Prejudice, who is appallingly rude, abusive and self-centred but has such power over their coterie that they are surrounded by fawning courtiers.


mouton enragée Gentle, harmless person who is put upon by everybody else until one day they can't stand it any more and the others don't know what's hit them.

Zeitgeist Spirit of the age.

Quotes about the 80s

I protest
When I was at university in the 1980s everyone (on the Left at least) measured their worth by the quantity of pious opinions they could produce, on the Third World, on women’s rights, on class exploitation – you name it. (Tim Lott Evening Standard February 26, 2004)

More Quotes About the Eighties here.

BBC4 is showing a trilogy of documentaries made by Vanessa Engle entitled Lefties. According to the programme notes, the films "look back at a time when left-wing ideas occupied the moral and political high ground of our intellectual lives . . . revisiting a passionate and turbulent era when the extreme Left believed it could change the world for the better and many people lived out their profound commitment to a political cause". When was this - 1926, 1931, 1945? No, more or less 20 years ago. ... The shock, perhaps, is the hammer-blow of realisation that these ways of thinking and living have walked out of the door, and yet they were there, somewhere at the edge of the room with their coat on, only a moment ago. (Ian Jack, Guardian February 4, 2006 Vanessa Engle’s Lefties documentary series)

Heady mix of affectation and farce…. Engle’s documentary teases out how staggering incompetence was a direct result of ideological pretension. (David Thompson’s blog)

Humourless cultural studies waffle … like some literary equivalent of the Eighties revival shows on our television screens this spring, Mort’s book often reads like a throwback to some terrifying textbook from 1984, in which space is always contested, identities are always in flux and chapters have titles like “Pathologies” and “Governance”. So when a policeman tells the Wolfenden Committee about cottaging ... He is “promoting a cognitive shift” and “encouraging them to see urinals as liminal spaces”. Later, discussing the Profumo affair, Mort announces that he will pay “attention to the scandal’s urban locatedness” and “complex negotiation of the themes of sexual and cultural modernity”, and claims that the affair “generated a dynamic and unresolved atmosphere of cultural and geographical disturbance”. This sort of stuff was bad enough twenty years ago. These days, it is not only ugly and frustrating but downright dated. Academics often complain that too much attention is paid to “popular” histories rather than their own works. But if they continue to write like this, can they really be surprised? (Dominic Sandbrook on Capital Affairs, Literary Review July 2010)

During the decades that the concept of human nature was taboo in academia, many scholars claimed that romantic love was a recent social construction. (Steven Pinker, Time January 2008)

This reminds me of my own indifference to the business world when I was a graduate student, and thought I was well informed on everything important—you know, semiotic theories of gender and decentered subjectivities in 18th century novels and that sort of thing. My arguments about these subjects with my peers were so VITAL. Rob Horning, popmatters.com

My social life was lived entirely through politics. (Margaret Sandra, Guardian, 2007. She dropped her surname – because surnames descend through the male line – thinking everyone would follow. She spent the next few decades explaining herself to bank managers.)

Theories of the malleability and cultural construction of gender identity, already falling out of academic fashion in the 1990s, became harder to defend, as the case was used by many to argue that "nature" trumped "nurture". (Wikipedia on unwilling transexual David Reimer)

Much of the heady idealism of the time has since drained away. (Fortean Times, 2009)

A workshop is a place for sawing up wood. (John Peel)
Eighties Relationships The Eighties Continued Eighties Decor The 10 80s Commandments More Quotes About the Eighties
Posted by Lucy R. Fisher at 21:58 No comments:

The first subordinate clause in a sentence refers to the subject of the sentence. If it refers to the object, or to a possessive, you get a dangling modifier. Here are some examples:

But after lying undiscovered for at least 300 years workmen accidentally stumbled upon Royston Cave. The Free Dictionary (The cave, not the workmen, lay undiscovered..)

Displayed in 1947 stretched on easels at the Lefebre Gallery in London, many buyers of the silk head-squares seem even then to have preferred framing to wearing them.Independent March 15 2003 (The squares, not the buyers, were stretched on easels.)

Sinuous, immaculate and unfussy, he reserved his subtlest powers for the end of the sublime adagio. (His performance, not he, was sinuous etc.) Times July 20 2006

The maid Anna saved the netsuke for her, hidden in a mattress. (Anna saved them by hiding them in her mattress – she didn’t hide in the mattress herself.)
Posted by Lucy R. Fisher at 10:56 No comments: