There's so much coded language in this piece from the Times February 24 that I can't pick out the nuggets.

Ministers will set up a working group to draw up guidelines for heritage bodies to implement a “retain and explain” policy for contested monuments.

The announcement followed talks with 25 organisations, including the National Trust, English Heritage and the British Museum.

Oliver Dowden, the culture secretary, had been expected to use the closed meeting to urge curators not to be selective in their portrayals of British history or to denigrate the country’s past. He discussed the government’s position that memorials linked to slavery or colonialism should be contextualised rather than taken down.

Afterwards a spokesman for the Department for Digital, Culture, Media and Sport said: “This was a very useful conversation about how we work together to protect our heritage for future generations. We will now set up a working group to produce national guidelines on how culture and heritage bodies can put the government’s ‘retain and explain’ policy into practice so that more people can engage in our shared past.”

The meeting follows months of dispute and protests over portrayals of Britain’s imperial past. The retain and explain policy will be backed by legislation previously announced by Robert Jenrick, the local government secretary, who said that the rules would save monuments from “baying mobs” backed by “town hall worthies and woke militants”.

A number of memorials to figures linked to the slave trade or empire have been taken down since last year’s Black Lives Matter protests and hundreds of others, including to Sir Francis Drake, Winston Churchill and Lord Nelson, have been named on an online “hit list”.

Hilary McGrady, director-general of the National Trust, which was criticised by Conservative MPs over a recent report on its properties’ historic ties to slavery and colonialism, said that yesterday’s meeting had been “a helpful and productive discussion about the challenges and opportunities we all face when exploring and communicating our history”.

Some heritage professionals have expressed dismay, however, over the government interventions, suggesting that organisations would lose funding if they did not toe the line. This week the Prospect, PCS and FDA unions wrote to Sir Ian Blatchford, convenor of the National Museum Directors’ Council, saying that their members in the heritage sector were deeply worried by ministers’ “seeming desire to ride roughshod over the arms-length principle”.

Blatchford, director of the Science Museum Group, said yesterday that the talks had been a “timely exchange about the importance of telling a balanced and well-researched history of Britain” and a moment to dispel “mischief-making” about the event. He said that the independence of museums was not at issue.

The meeting came after a museum chairman said that they had to consider taxpayers’ views on colonial history and not only “strident voices”. Samir Shah, of the Museum of the Home in east London, said the “vociferous” calls to topple statues were drowning out other voices and the culture secretary was justified to remind state-funded institutions that “we have an obligation and a duty to the taxpayer”.

Shah told the BBC that he did not agree that Dowden was covertly threatening to withdraw money from state-funded institutions.

On the BBC Radio 4 Today programme, Kim Wagner, professor of global and imperial history at Queen Mary University of London, said he thought it was a “quite disturbing intervention” by Dowden. He said that the minister had felt that it was the duty of museums to “essentially present a narrative that makes British people feel proud”. That would result in a “whitewash version of history”.
Mark Bridge, David Sanderson

Why does the government want us all to feel "proud"? What is worth all this obvious propaganda?

Have you ever wondered what people really mean? The expanded and updated Boo and Hooray may have the answer.

apologist: defender of opposing view
biased: biased in the wrong direction (usually to the Left)
fourth-form debating society: using logic
I’m being harassed by a troll! They disagreed with me.
I’m bored now.

I’m just trying to start a debate: I want to make some unacceptably bigoted remarks upfront. I can plausibly deny them later.

The fact is, the truth is…: The received wisdom unsupported by evidence is…

There’s a fine line between X and Y: I want to use the hooray word, not the boo word, or else I want to pretend bullying is “just banter”. (Or “X and Y are totally opposed and cancel each other out”. Or even “X and Y are light-years apart.”)

There’s no justice in this world! Things didn’t quite go my way.

They’re taking away my freedom of speech: They’re disagreeing with me. (And telling me I can’t make racist and sexist comments. There’s no law against it! Except there is – in the UK.)

They’re bad at communication: They don’t listen. They don’t understand what they hear.

We were discriminated against and treated unfairly: We lost the vote.

Many more euphemisms for disagreement here.

Received Ideas in Quotes: It Happened to Me! 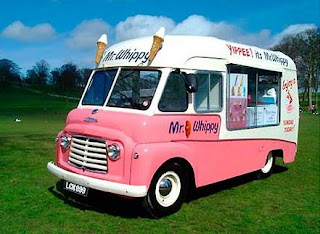 Thirty years ago my mother used to “cook dinner for everybody in the street” and now nobody cares about her.

My dad watered mum’s plants and they turned out to be plastic!

This kid lay on the pavement because he was cross that his gloves matched his jacket!

My parents told us that when the icecream van played Greensleeves it meant they’d run out of icecream!

A friend claims that he goes into a supermarket and fills a basket with food, and if there are self-service checkouts he just leaves the basket and walks out.

Science and nature TV presenter Liz Bonnin “takes all the plastic off her shopping and leaves it at supermarket tills to highlight the overuse of packaging”. (Times Dec 31 2020. She could easily take a TV crew with her...)

I no longer buy meat products from supermarkets because they promote Halal. I use my local butcher instead. I told him recently that his sausages were the best I had ever tasted. "That's because they contain a secret ingredient," he said. "What's that?" I asked. "Meat" he replied. (@Sleazebuster. I'm not sure of the point of this story.)

I was sitting in a café when two paramedics came in and queued for coffee and cakes. Before they could get their order, they got a call. “This always happens to us!”, they joked as they left. (The story then segues to a request for emergency services to be allowed to jump the queue. A petition was set up in 2017. It’s a good cause, but why start your appeal with a fake story? Oh I see...)

I came across a handful [of Remain marchers] down Whitehall. I heard one threaten to knock someone out. I spun my son around and got away from them. (@DamoFsMum)

My Uber driver last night had 2 phones: one for his wife and one for his girlfriend. He rang both of them (separately) while driving me. (@Catiewilkins. “Made-up story for likes”, says another Tweeter. Wilkins is a children’s author and stand-up comic.)

We were once told at work that we couldn’t ask for black or white coffee but rather coffee with milk and without. Our response was to drink more coffee and have it either black or white. The thought police gave up after a couple of weeks. We have to fight back against these loons. (@PattyUKGB. @Otto_English replies: No you weren’t. You’re welcome.)

So I just got back from lunch with a 24-year-old. I said “Isn’t it funny that there are almost no women trying to figure out what men need, what they are really like, how to have successful relationships with them?” She says “Women don’t care.” (@fotogreg. Today in things which never happened, says @SecuLawyer.)

Seems that my campaign against the rhetoric of anecdotes in party-leaders’ speeches has to continue (it’s a recent generic convention that barely works aesthetically or cognitively but it won’t die). (@ProfAFinlayson)

A cab driver told me if he saw any of those Remainers or Tory sell outs he’d spit in their face or something worse. This is not the first time I’ve heard this angry language. The betrayal May has inflicted will cause more angry division than ever before and who could blame them. (Steven Woolfe MEP)

Feel free to borrow any of these memes – you'll be shared and retweeted all over the internet.

The Man of Dangerous Secrets by "Maxwell March" 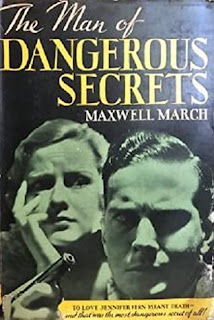 Margery Allingham, respected author of Tiger in the Smoke, Hide My Eyes, The China Governess etc, also wrote potboiling thrillers under the name of Maxwell March. Her family were producers of popular fiction, and she carried on the business. Her attempts to keep a large house and family of hangers-on can be read between the lines of Dancers in Mourning. (In real life, she bought the doctor’s house with its rose garden – did she keep the stuffed wolf?)

The is the only one of her “other” productions I have read. It is a thriller in the style of Sapper, Edgar Wallace, E. Phillips Oppenheim and Sax Rohmer. Robin Grey is a private investigator affiliated to the police (represented by elderly Inspector Whybrow).

Spoilers alert! The story begins on a railway station, where Robin is staked out looking for an evil-doer who never appears. Instead, he recognises a distinguished City man disguised as a railway official, who proceeds to push a young passenger onto the live rail. Robin rescues the fellow, and the story gets going. Anyone engaged to the beautiful Jennifer Fern meets an untimely end (this candidate is despatched a few days later). Robin is roped in to investigate, suggests to Jennifer he should be her next fiancé, and promptly falls in love with her. She is a damsel in distress, very unlike Allingham’s usual career women.

The book is short, and seems written for schoolboys or the teenagers who worked in shops, offices and factories from the age of 14. The headlights of a long, low, powerful limousine rake the dark country road – but then we are told “It was very dramatic”. Clichés of the genre abound: her flawlessly lovely face, his lazy smile, a metallic click, “They’ve got her, the fiends!”, a torn playbill clasped in his hand. We even meet that well-known character, the man whose features are so nondescript that he can impersonate anyone. (“I just knew it wasn’t Lord Alloa.”)

We are quickly introduced to the main plot: a coterie of respected businessmen who are blackmailed by the mysterious “Dealer” into committing his crimes – including murder. The Dealer is one of them, but which? Jennifer’s father is also in the circle, and if she ever marries, a hidden box will spill evidence damning to them all.

Despite the hackneyed writing, the Allingham imagination keeps on working. There isn’t much “description” – teenage readers would skip it. No humour or social comment, either. But there is an atmospheric scene in a dark and deserted office building, leading to the discovery of a man locked in a safe, and a chilling moment when a “cripple” uncurls from his wheelchair and bounds away into the night.

We recognise the refined elderly lady in the priceless lace shawl, who wonders where her brother’s money has gone. Also the disguised character on the railway platform, and the meeting in the vast, empty lounge of the failed hotel which is due to close next week. There are some truly frightening moments when Jennifer finds herself in a locked nursing home situated – where else? – in the Essex marshes. “You’ve just got some silly ideas into your pretty head, my dear – you’ll feel much better after the Operation!” Robin's ride there, sharing an ambulance with a dead body and a cross-dressing nurse, is also thrilling. Will the marshes claim another victim? What do you think?

But what did Inspector Whybrow do with the syringe?