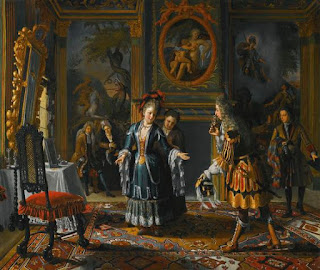 Visiting Blenheim Palace over Christmas, some friends were shown a portrait that contained not only the man who commissioned it but another person who had been added to enhance the atmosphere. The guide explained that the man who commissioned it had refused to pay the artist because portraits were charged by the limb and the more limbs, the more expensive the picture. This, he said, is where the expression “it costs an arm and a leg” comes from. (Daniel Finkelstein Times Jan 2018)

One of the Eurostar tunnelling machines lies buried off to the side halfway across. They drilled from each end with different machines because of different predominant geology and had to get one machine out of the path of the other. (FB)

13th century Scottish philosopher and theologian Duns Scotus recommended wearing a conical hat to stimulate your brain and increase your intelligence. This could be why wise wizards are often portrayed wearing pointy hats and why a dunce cap is pointed. (Adam Pidgeon @CineLore)

Dessert is for nuts and fruits after the table has been cleared. Deserted. (FB)

I took a class once on Classical Chinese where we learned how the Dao de Jing didn’t start out that gnomic and mysterious, it’s just that scribes kept dropping out “filler words” to save their hands cramping. (Arthur Chu ‏@arthur_affect)

The ‘h’ in ‘ghost‘ is a historical hiccup. William Caxton, having first practised his trade in Flanders, brought Flemish typesetters back to England to help set up his printing press - they lobbed an ‘h’ into English ‘gost’ because their own native word was ‘gheest’. (@susie_dent)

The most known theatre superstition, "Don't whistle on stage – you'll blow yourself out and the devil in", has its background in lighting. In the baroque era you could mess up the whistled lighting commands, and and in the gaslight era that could mean danger of explosion. (@EevaTenkanen)

Vegetarians just love to be asked “But what do you actually eat?” and quizzed over and over about which meat products they miss the most. (They always answer bacon sandwich; it’s a stock reply.) (guyliner.com)

A lot of my clients… thought they were getting bad service because they’ve been told “everyone knows Parisians are rude”. (medium.com)


Orwell’s guide to the English language is a “misconceived and blundering polemic”. (Oliver Kamm)

Flint was brought North as ballast in ships and dumped in the sea to make way for a return cargo - coal. (Wouldn’t it be more cost-effective to take a cargo north?)

Others place the toes on a line drawn on the floor of the House of Commons intended to keep at a safe distance opposing gents with swords. There are such lines, but no Speaker has ever been recorded ordering Hon. members to ‘Toe the line!’ (Spectator)

Catherine Elwas Thomas, writing in Boston around 1830, went to great lengths to prove that nursery rhyme characters were based on real people. (folklorethursday.com)

In the 19th century the story began to gain currency that the rhyme is actually about Thomas Horner, who was steward to Richard Whiting, the last abbot of Glastonbury before the dissolution of the monasteries under Henry VIII of England. The story is reported that, prior to the abbey's destruction, the abbot sent Horner to London with a huge Christmas pie which had the deeds to a dozen manors hidden within it as a gift to try to convince the King not to nationalize Church lands. During the journey Horner opened the pie and extracted the deeds of the manor of Mells in Somerset, which he kept for himself. It is further suggested that, since the manor properties included lead mines in the Mendip Hills, the plum is a pun on the Latin plumbum, for lead. (Wikipedia)

According to Bobby Pickett himself, the “graveyard smash” part of Monster Mash is explicitly about vandalizing military cemeteries. (Stefan Heck‏ @boring_as_heck)

Wilfred Pickles was chosen as a BBC announcer during the war because the Germans would have difficulty imitating his accent if they tried to broadcast pretending it was genuine BBC material. (Via cixonline.com) 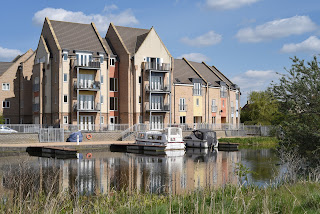 
THE IMPORTANCE OF BEING...
A catastrophically earnest drama about the Armenian genocide. (Kevin Maher)
Earnest paperbacks about psychology and sociology on the book-shelves. (Simon Brett)
From the Department of Overly Earnest Art Show Names: "Utopia Is No Place, Utopia Is Process". (Carolina A. Miranda ‏@cmonstah)

Les provinciaux, the rather condescending term Parisians use to refer to non-Parisians.

The Perry Mason books. I tried, but they were dreary. Still, my disappointment didn't come close to the incredulous rage I felt when I read The Da Vinci Code. (via FB)

The Devil at Saxon Wall is set in a tiny village in Hampshire which is, as Nick Fuller puts it, “horribly rustic”. (Noah Stewart)

Paperchase, purveyor of cutesy stationery to the masses. (Jonn Elledge)

@karlminns Good rule of thumb; if you use the word 'Londonistan', you are a fully-furnished, copper-bottomed, tungsten-edged, lifetime-guaranteed, weapons-grade bell-end.

She’s a ruthlessly dull person. (David Whitley on Theresa May)

Meanwhile, at Winterfell, Littlefinger was finally in a hole he couldn’t hammily overact his way out of again. (Hugo Rifkind on Game of Thrones)

At the rather demure Worcester Cathedral… (Hugh Wilmott)

I'd love to know the story of why someone built this gloriously silly building in 1920s small-town Australia. (John Band‏ @johnb78)

They might say I was elderly – a kind of genteel pastel version of ageing. (Falling, Elizabeth Jane Howard)

Like MGM fifties musicals... "some weird notion of jazz" . (On La La Land) 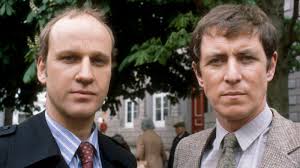 Nick Timothy looks like every aggressive squash-playing businessman who turned out to be the murderer on Bergerac. (Michael McAvoy‏ @KillieMeSoftly)

Emma Thompson is Love Actually's resident female-personality-haver, which means that she's totally nice and bland 95% of the time and then every once in a while she'll say something horribly caustic and inappropriate and out of character. You know, like a normal regular human woman who is not a robot! (jezebel.com)

I took mother to the pictures this afternoon. It was a typically British never to be forgotten epic of the 'Keep it up, stick it out, take it on the chin, I knew you'd volunteer, good heavens an orange!, Jack darling, what's happened to us?' school of film. (Round the Horne)

There’s a lot of blame to be placed here on the Hollywood idea of autism giving people a magical power to identify and speak Hard Truths. (@arthur_affect, in the context of Robert Damore claiming to be autistic and using it as an excuse for saying women don’t belong in tech.)

The "tortured artist" trope kills. I want artists to be happy, healthy, and joyful. Stop saying you need to suffer to be an artist. (@tsengputterman)

I don't watch these [memes] nor the video recipes. You know, the ones which visually show the physical preparation of the recipe, only at quadruple speed, usually with annoying music in the background. (Michael Morrow)

Helen was a mildly maverick copper, which means she was a standard-issue TV copper. (Andrew Billen on In the Dark, Guardian)

Any film which has a character replaced by an evil double deserves to be watched, in my book at least. (Imdb commenter)

It is this idea of equating gritty with good, however, that is the pitfall... One of the main reasons that Anne fails is, to my mind, that it is rooted in white feminism and misguided ideas of empowerment at the expense of what makes the books and other adaptations so magical. (Thewalrus.ca on the latest remake of Anne of Green Gables)

In the future you will be able to tell an alien race as they are incapable of using contracted words. (@peasmoldia)

Films like this were very easy and cheap to make - minimal locations, scenery munching, explosions or car wrecks. (Imdb on Green for Danger)

A young music-hall entertainer aspires to stardom on his own terms, but faces a dilemma as to whether he should go it alone or stick with his family troupe. (Ealing Rarities blurb)

Good-natured comic shenanigans follow that pulls the legs of stereotypical northerners and southerners alike. (Imdb on Diana Dors vehicle Follow the Money. Thanks for the warning.)

The Francis Durbridge serials all seemed to inhabit the same universe, that of unexplained happenings, people being not what they seem and the villain being someone close to the hero/victim. (Imdb commenter)

It's very kind of General Von Exposition to name all the characters we just saw. (@adamcreen)

I’ve had a number of emails about our repeated use of a picture of wrinkled hands peeping out from a patchwork blanket to illustrate stories about the over-60s. (Times)

As the prophecy foretold.
But at what cost?
So let it be written; so let it be done.
So... it has come to this.
That’s just what he/she/they would have said.
Is this why fate brought us together?
And thus, I die.
Just like in my dream?
Be that as it may, still may it be as it may be.
There is no escape from destiny.
Wise words by wise men write wise deeds in wise pen.

Radio 4 drama where the characters keep saying out loud what is happening to them: 'Aaaaargh! Now our boat is being swept away!' (@MrRayNewman)

I have been loitering in bed for a couple of days, passing the time listening to drama on Radio 4 and Radio 4 Extra. The quality is excellent but, on reflection, the content has been rather grim. I have been immersed in slavery, a teenage girl being groomed to go to Syria, a person with bipolar disappearing (leaving a partner and young children) and a possible murder by paedophiles. (ABS Where are the thrillers, mysteries and comedies of manners? And the scifi?)


SCIFI
Of course Alexander Nix is not a Bond villain, he's the scientist who helps the villain until he's no longer useful, then he gets shot, blown up, or eaten. (@simonbayley on the Cambridge Analytica boss who allegedly helped Trump into the White House.)

I am quite weary of Hollywood's propensity to depict the lone genius scientist rather than science as a cooperative enterprise. (@KateElliottSFF)

In horror films it’s when you think the thing is dead that it’s most likely to return seeking vengeance. (Metropolismag.com)

I just watched the trailer for Covenant. Same reaction with Prometheus and Predator 2 - my reaction, as a SF writer, is 'Don't poke shit.' That thing? Which you just think you offed? Don't poke it. Even with a gun. Especially don't take its helmet off. If it looks squishy and it's opening up and exuding a weird substance, don't put your fingers in there. If there's even the faintest possibility of it shooting out some kind of extension which might be attached to your person, keep several feet back from the get-go. If someone sticks something in your ear, or indeed any non-sexual orifice without your permission, ask them to remove it, if necessary with maximum prejudice, and if they don't do it, run, or punch them. I've applied these basic principles to my own life and it's worked so far: should I find myself on an alien planet, I'll be leaving anything even vaguely biological well alone. (Liz Williams)

Or better still, don't go into creepy crashed spaceships, there was a good reason why they were left crashed and abandoned. (RD)

Yup, don't poke that, don't eat this and never read out loud from the books. (TH)