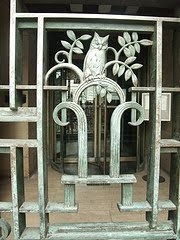 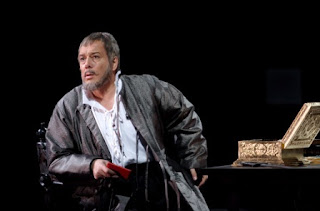 King Philip of Spain
Verdi's opera Don Carlos has a complicated plot. King Philip of Spain marries his son Carlos's fiancee, Elizabeth. King Philip's ex-girlfriend, Eboli, is plotting and scheming. So is the King's friend, the Marquis of Posa, who is also a close friend of Carlos... Meanwhile, Philip has a little habit he likes to indulge: burning heretics. Spain has conquered Flanders, which is full of - ugh! - Protestants. There are a lot of scenes in a graveyard.

There are two big central setpieces: emissaries from Flanders try and put their case to the King just as he is about to burn some heretics. Carlos comes in on the Flemish side and is thrown into prison.

That night, the King is alone in his bedroom (which is the size of the Royal Opera House stage). In his wife's jewellery box he has found a portrait of Carlos. "She never loved me!" he mourns and looks forward only to death. A Jaws-like theme announces the Grand Inquisitor, blind and 90 years old. The King asks "Will you absolve my sins if I have my son killed?" The Grand Inquisitor says that'll be fine. Enter the Queen. The King accuses her of betraying him. She faints and he calls for help. In rush Posa and Eboli, fully dressed and they all sing a lot...

There's just one downside: the acting! The terrible operatic acting! It never changes. All attempts to look naturalistic only come across as a series of bizarre clichés. About 40 years opera singers were told "You can't just stand there and sing! You've got to make it look more real!" So instead of standing there and singing and letting Verdi's music do the acting for them they're never still. They move their heads from side to side, they crouch and spring up again, they fling their arms into weird postures, their entire faces dance about: rolling eyes, waving eyebrows, flaring nostrils, trembling lips. King Philip did all of this during his most touching aria. Eboli was the worst offender. Opera singers have to keep their necks and backs in a straight line, but they think if they bow from the hips while doing balletic portes de bras you won't notice. They also sing to the ground, or a piece of furniture, instead of the person they're supposedly talking to. Eboli's most ghastly posture was the one with arms oustretched and head down, looking up under her eyebrows. Posa was quite restrained - perhaps that's why he looked more handsome. Meanwhile Carlos reeled around the stage and pulled exaggerated crying faces.

During the heretics scene, the chorus has to come on waving crucifixes and prayerbooks and sing a bit about how they support the King's persecution of everybody with slightly different opinions from the Pope. Well, no, they don't have to hold them up and wave them about all the time. But if they must, must they do it so fast and twitchily? It would have been much more effective if they'd processed slowly and just held their props. Or not held anything. If you leave opera choruses to do their own acting they turn and nod to each other the whole time – like here. 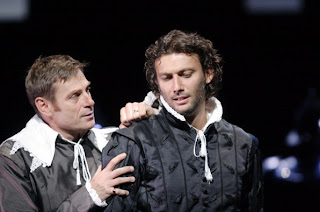 The Marquis of Posa and Carlos
The music is wonderful. Verdi gets in a lot of digs at kingship, dictators, conquering other countries, religious intolerance etc. Carlos is meant to be the hero, but the Marquis of Posa is always much better-looking, and the King is far more sympathetic. If you can't get there in person, you can watch it on BBC's Iplayer: Don Carlos.
Posted by Lucy R. Fisher at 20:49 No comments:

22 Upsides to Being Old 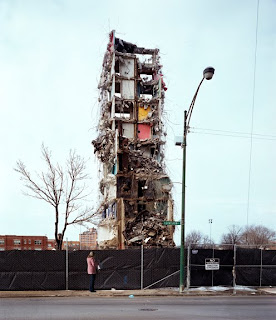 1. You can tell your doctor what's wrong with you and what you want him to do about it.

2. You can stare at people and nobody minds.

3. People don't keep bullying you to be outgoing and loud and bubbly.

4. You can be quiet and sweet.

5. You can enjoy mild pleasures like visiting stately homes or craft fairs.

6. You can say "Oh look! What a beautiful building!" without people telling you you're old-fashioned and quaint.

7. You can enjoy a cup of tea and a biscuit.

8. You can swap banter with other old people.

9. You don't have to be cool any more. (And nobody puts you down if you haven't heard of the latest thing - they expect you not to know!)

10. Random people chat to you.

11. Handsome young men chat to you.

13. Those "must-read" books are long forgotten.

14. Those burning debates are as dead as disco.

15. You can witness Really Bad Ideas – like underpasses, tower blocks and trendy reading methods – finally pass from the face of the earth.

16. You can see the return of ideas that were working perfectly well until somebody came along and modernised them – like pedestrian crossings, houses in streets, and B says "buh".

17. Nobody tells you "Go for it! What could possibly go wrong!" because you've found out by now.

19. At a party, you can sit in a chair and not talk to anybody, because nobody takes any notice of you anyway.

20. You can be patronising.

21. You become assertive – actually you don’t, but people expect you to be a bossy old bat and you can live up to their expectations.

22. You can be opinionated.

24. You can stun young people by telling them you use Twitter!

Hoshino Yukinobu (b. 1954) is a leading Japanese manga artist. One of his most popular characters is Professor Munakata, who investigates history and folklore in his manga adventures. Hoshino has been inspired by his engagement with the British Museum, London, and its collections to create a new manga in which his popular character Professor Munakata, a professor of folklore.

Check out MY AMAZON BOOKSHOP.