Turner and the Masters 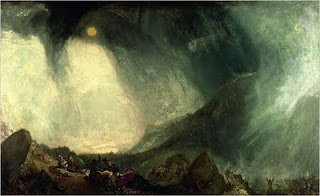 Turner and the Masters is at Tate Britain until Jan 31. It hangs works by Turner among works by the painters he was “influenced” by. Or rather, that he painted “in the manner of” in a deliberate attempt to be considered as one of their rank. But that was how you played the art game in those days.

What, Turner our homegrown genius, play the game? Turner the proto-Impressionist, copy the old masters? Turner who painted in a way we approve of long before it was fashionable, spin his own reputation?


Matthew Collings in Saturday’s Guardian reviewed the show and unpicked the way we see Turner.

The artists Turner wished to be seen with in public were Cuyp, Claude Lorrain, Poussin, Salvator Rosa (immensely popular in the 18th century – time he was reappraised), Rembrandt, Rubens, Ruisdael, Titian, Veronese and Watteau. Says Collings, Turner "was a working-class man who achieved greatness in art, but owned a pub and had no friends … He had two mistresses and never married.”

In Turner’s day you were meant to copy the old masters. Still-life and landscape were at the bottom of the tree, next up was portraiture, but top was history painting “big scenes from real history, or … mythological or biblical dramas”. (Which look ridiculous to us today.) The show is “really social history with art as the focus”.

For the last 50 years Turner “has been widely thought of as a genius of ‘painterly’ painting… from this viewpoint he is valued as a sort of artistic crystal-ball gazer, anticipating Monet’s impressionist scenes… he came back into vogue in the 1960s because of the rise of abstract expressionism. The change in popular opinion occurred with a show at the Museum of Modern Art in New York in 1966 called Turner: Imagination and Reality. Because the selection of works was deliberately weighted in favour of his later period, when lines become blurred and there are fewer enclosed shapes, a new image of Turner emerged as a mystic prophet of modernism – an image that has remained intact in the popular imagination ever since.”

It should be a fascinating show, revealing not just the sources of Turner’s inspiration but also our own sheep-like tendencies to follow the latest fashionable opinion. And Turner really was a genius. 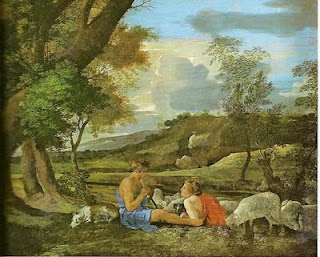 Moctezuma at the British Museum

This show opens on Thursday (24 September). Moctezuma is the guy we used to call Montezuma, leader of the Aztecs in what's now Mexico. Apparently we got that wrong too and they called themselves the Mexica.

The Aztecs were an ancient people and their art is high quality. They carved granite and other stones into the faces of beast-gods and warriors - giant snakes were popular. HQ was a city in the middle of a lake (it's now Mexico City and the lake is no more). They grew crops on artificial islands and liked to paddle about the lake wearing garlands, singing and reciting poetry. How very civilized!

Aztec religion demanded a lot of human sacrifices. Wars with nearby tribes produced enough captives to supply the greedy gods. Skulls and skeletons dance through their art.

Then the Spaniards turned up, looking for gold. They were outnumbered, but great ruler Moctezuma (1466–1520) caved in and apparently accepted his and his people's fate. Did he think this was one war he couldn't win? Stone knives versus firearms isn't a fair fight. And how did he die? At the hands of his subjects, claimed the Spaniards.

Priceless artefacts and manuscripts tell the story. The Spaniards brought another religion which the Aztecs adopted. Perhaps it didn't seem too strange.

harbinger for Achilles heel? Trojan horse? albatross? poisoned chalice? worm in the bud? early warning system? Her collection of gently provocative essays suggest that our familiarity with crows may be a harbinger. New Scientist 5 Sept. 09 A harbinger was originally someone who went ahead of the travelling party to arrange the night's food and lodging.

on a role for on a roll (a role is a part in a play; if you're on a roll you're a log rolling downhill)

Applying his trade for plying

intercession for reminder? “Rags are still tied to trees as divine intercessions” Dan Snow on the Celts, BBC2 He means a plea for intercession.

greenskin for cleanskin: A new, coherent vision for the commission, drawn up with greenskin commissioners who will pull in the same direction. Guardian 7/29/09 "Within the vernacular of counter-terrorism agents and police officers, a cleanskin is an undercover operative whose identity is not known to the forces he or she is tasked to infiltrate." freedictionary.com

androgenous for androgynous Guardian 7/20/09 Androgenous ought to mean "becoming masculine". An androgynous person is a boyish (andro) girl (gyn) or a girlish boy.

Cocoon at the Darwin Centre 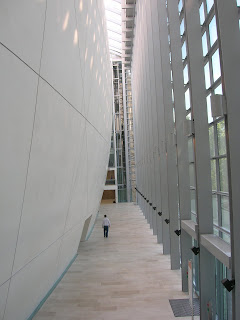 The Cocoon at the Natural History Museum's Darwin Centre is now open to the public. It's a concrete pod inside a tall space, curved to look like a silk-worm cocoon with a few loose threads engraved on it. Inside is a low-lit spiral walkway (you take a lift to the top and walk down) with many displays of leaves, branches, spiders, scorpions, beetles, nuts, fruit etc from the museum's collection. All the (17 million) plants and (3 million) insects are now housed in the centre of the Cocoon and you can glimpse filing cabinets through viewing windows. Researchers can make an appointment to examine the collection, but the public has to be content with admiring the selection on show, and looking over the shoulders of some of the museum's 350 scientists – there's a viewing window into one of their offices, and into a display case where real live boffins will demonstrate how to prepare specimens. At several points on the trail volunteers will talk you through what's on show, and answer your questions. There are also talking screens, videos, and recordings which spring to life as you pass. There's text on the walls, too, explaining such concepts as fieldwork and peer review.

The museum is also debuting its science theater, called after the greatest science communicator, David Attenborough. It has clinical white seats and many screens, so everyone has a good view of what the boffs are putting under the "visualiser" (it's like an overhead projector for objects). They enthusiastically show off meteorites from Mars or live, fluorescent scorpions. Another thrill was timelapse photography of a dolphin carcase being eaten by scavengers from an experimental underwater webcam somewhere off Sweden.

The Natural History Museum is at:

Bumpits
They're for bumping your hair up, geddit? Or rather, they're "hair volumizing inserts". Or is that "volumnizing"? Read all about it at bighappiehair.com. Flat hair is so last year!

It's as aesthetically pleasing as the Bumpit. See whirlastyle.com. They also sell the Poppi and the Klicinz.

And if those aren't enough for you, there's always the Hairagami and Sophist O Twist. Or you can contemplate the many patented (but possibly not manufactured) ponytail and bun devices at freepatentsonline.com. And if you want a chignon base, they even have them at: