So, Was Agatha Christie Anti-Semitic? 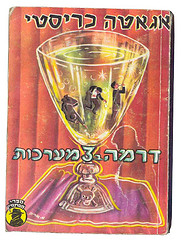 In the Daily Telegraph 20 March 2013, Matthew Sweet reviews Perspectives, a programme with David Suchet (the BBC's Poirot) on Agatha Christie’s disappearance in 1926. Did differing responses to the affair reflect attitudes to Christie’s (conservative) politics as expressed in her books? It’s an interesting question, but Sweet uses it as an opportunity to wheel out the old accusation that Christie was anti-Semitic:

“The buzz of anti-Semitism is loud in her fiction of the 1920s, with its references to ‘Hebraic people’ and ‘yellow-faced financiers’ – and this is more than the thoughtless transmission of cultural background noise. Christopher Hitchens, who had dinner chez Christie in the Sixties, recalled ‘the anti-Jewish flavour of the talk was not to be ignored or overlooked, or put down to heavy humour or generational prejudice. It was vividly unpleasant.’”

Ruth Dudley-Edwards on a Telegraph blog post headlined Anti-Semitism is a light sleeper. Look at Agatha Christie, also responds to Suchet’s programme, and refers to Sweet’s article, repeating the quote from Hitchens.

Both Sweet’s examples are lifted from Christie’s Wikipedia entry – perhaps he didn’t have time to do any proper research. Hitchens recalled the incident in his autobiography, written in 2010. We only have his word for what was said decades earlier. It’s possible that he remembered dining with the Mallowans, and that his memories were tinged by What Everybody Knows about Christie – that she was anti-Semitic.

Perhaps we should all read Victims or Villains: Jewish Images in Classic English Detective Fiction by Malcolm J. Turnbull (I’ve got it on order). But a quick trawl of memory and Google throws up the following:

Christie’s first published novel, The Mysterious Affair at Styles (1916) has a Dr Bauerstein among the cast. From the original text (disparaging references to Jews were wisely removed from later editions of her books), here’s what some other characters say about him:

"I've had enough of the fellow hanging about. He's a Polish Jew, anyway."
"A tinge of Jewish blood is not a bad thing. It leavens the" — she looked at him — "stolid stupidity of the ordinary Englishman."

“He is, of course, a German by birth," said Poirot thoughtfully, "though he has practiced so long in this country that nobody thinks of him as anything but an Englishman. He was naturalized about 15 years ago. A very clever man – a Jew, of course."

He’s a red herring: Jewish characters may have been sometimes sinister in Christie's early books, but they never turn out to be the villain.

Oliver Manders in Three Act Tragedy (1935) is sympathetic, even if he does have an inferiority complex and a world-weary manner. The perceptive Mr Satterthwaite observes that there is “something un-English” about him and guesses that he is Jewish.

In the original text of Peril at End House (1932), picture dealer Jim Lazarus is referred to as "a Jew, of course, but a frightfully decent one". This sentence was omitted when the book was serialized in the US. And in the audiobook version of The Hollow (1946), a “Whitechapel Jewess” (the henna-haired and beringed proprietress of a dress shop) has become a “Whitechapel princess”.

In The Body in the Library (1942), Basil Blake accuses his wife of flirting with a “disgusting Central European” called Rosenberg. But Poirot has a helpful theatrical friend called Joseph Aarons, who appears in several of the books.

Christie in her autobiography describes working with Dr Jordan, the German director of antiquities in Baghdad, in the 30s. (He was later revealed to be a Nazi agent sent to undermine the British in the region.) She found him a cultured, charming man and enjoyed his playing of Beethoven sonatas. But then one day someone mentioned the Jews, and his face changed “in an extraordinary way that I had never noticed on anyone’s face before. ‘You do not understand,’ said the Doctor. ‘Our Jews are perhaps different from yours. They are a danger. They should be exterminated. Nothing else will really do but that.’ I stared at him unbelievingly... It was the first time I had come across any hint of what was to come later from Germany."


Update: I have now read Victims or Villains. It is an interesting but brief trawl through detective fiction from 1890 to the post-war period, and its frequent unpleasant stereotyping of Jewish people. Dorothy Sayers, though her first book featured a "decent, domestic" and gentlemanly Jew, had her characters throw out some unnecessary and insulting remarks in later books. As a private person, she became more prejudiced, expressing various opinions in a letter that included the idea that Jewish children were unable to learn "the common school code of honour". Turnbull reveals that the same writer could be concerned over the fate of the Jews under Hitler, and continue to use mean, lazy stereotypes of "fat, ugly" pawnbrokers and moneylenders. The subject is not simple, and much more could be written about it. (The publishers might want to get the text proofread before the next edition – it is full of typos and howlers such as "afficianado" for aficionado and "relict" for relic.)

And it still seems unfair to blame it all on Agatha Christie, just because she's the most popular of the authors discussed. (The other Queens of Crime come off better: Ngaio Marsh featured a sympathetic Dr Hartz – now Hart – in Death and the Dancing Footman, and Margery Allingham brought in Mr Melchizedek in Look to the Lady: "Mr. Israel Melchizedek was that miracle of good breeding, the refined and intellectual Jew. Looking at him one was irresistibly reminded of the fact that his ancestors had talked to Jehovah.")