ARGUMENTS
The classic political defence is to say "This is a politically motivated attack", to characterise criticism as coming from sore losers, spiteful opponents, rent-a-mob and so forth. Followed naturally by wanting to "move on", "draw a line under it" and other euphemisms for blocking any further embarrassment.
(Via cixonline.com)

It is not true that Stonewall looks to shut down debate. Meaningful, constructive debate and discussion around complex policy ideas are at the heart of what we do as a charity. (Stonewall. Translation: You don't disagree with us.)

I prefer a more nuanced, balanced and intelligent examination of history, which of course would preclude any "trashing". (GH. We were talking about “honouring our country’s Golden Age” – the Empire – or not. He wanted to preclude any criticism from the word go.)

Time to contribute constructively and not oppose for the sake of opposition. (@erskine0812)

What century are we living in when a reader writes to a newspaper claiming that "some women are using masculine behaviour to aggressively promote their agenda in an uncompromising way"? (@lnmackenzie1. Translation: “They’re disagreeing with me!”)

I suspect getting called TERF is all for the same reason: "We don't have any counterarguments, so just give excuses to avoid having to provide any evidence at all." (@JamesCantorPhD)

A mansplainer who I called out for mansplaining feminism advised me to be more polite. I think this means "don't be critical at all".


SIMPLER TIMES
Does anyone else wish for simpler times? I feel life was better without social media & internet. (@Nursemecj. The following thread defines “simpler times” as “without all this technology”. Searching Twitter for “simpler times” reveals that for many people it just means “I was younger then”.)

It was a different, simpler, nicer age. (MB)

Like cups of Ovaltine, tram tickets and suspender belts, an echo of a simpler time. (Simon Brett, A Comedian Dies. Oyster cards and tights are simpler than a conductor selling paper tickets, or suspenders and stockings.)

It was kind of like the last decade before social media, cell phones, internet. Throw in the pandemic, and I'm not surprised people are yearning for times that didn't seem as complicated. (Via FB)

Jan. 9, 1913: We like to think that the past was a kinder, simpler time — when life moved at a slower pace. But no. The LA Times publishes a Page 1 news map “as an aid to the busy reader helping him to devour a body of news many columns in length.” In the map, we find: 1. Troops arriving at the front 2. Ship in distress 3. Burning building 4. Land battle 5. Earthquake 6. Execution 7. Volcano eruption 8. Forest fire 9. Assassination-massacre 10. Street riot 11. Let slip the dogs of war 12. Burglary and robbery 13 More snow 14. Pestilence and starvation 15. Sea fight 16. Railroad accident 17. Fatal automobile accident 18. Aeroplane accident (Larry Harnisch, ladailymirror.com)

More here and links to the rest. 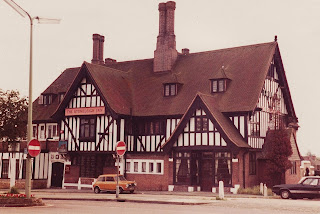 A model is found murdered in a private art school situated in a village near a sizeable town. Artists in Crime by Ngaio Marsh? No, a later book (1943) by Moray Dalton (real name Katherine Renoir). Some say this novel compares favourably with the work of the Crime Queens: Christie, Marsh and Sayers. Others find the ending a cop-out. The central romance is rather pallid, and disappointingly, most of the students aren't even sketched in. We concentrate on the rather ordinary Cherry, and her best friend, gossip-monger and snooper Betty: She was an ordinary-looking girl who had never had any excitement or power over anyone.

We're in the middle of World War II, investigating the murder with Dalton's series detective Inspector Hugh Collier, and there's a lot about how you get from A to B in the blackout when you are a policeman without a car – or even a torch. Characters really are two-dimensional: the ghastly Arnold might have had some redeeming features in the hands of the Queens. Descriptions of interiors form the main social comment.

Shy art teacher Mr Kent has been railroaded into sharing a house with his hard-faced sister-in-law (mother of the awful Arnold): The mantelpiece was crowded with ebony elephants and brass jugs from Benares, the the second-rate junk brought home by second-rate exiles.

The school is owned by Signor Morosini, a society portrait painter engaged to one of his subjects: The formal Italian garden and the ornate facade of Bello Sguardo looked oddly artificial under the leaden November sky, with the falsity of exhibition buildings in the unkind light of day. Collier turned up his coat collar. It was an unconscious reaction to the shivering nudity of the statues on their pedestals among the dripping laurels.

Caretakers Mr and Mrs Pearce come under suspicion: Collier had been turning over the pages of a large family Bible that lay on a red wool mat on a table in the window, with a pink and blue vase inscribed, ‘A Present from Margate”, which Pearce had won as a prize in the shooting gallery of a fun fair, and an aspidistra in a pot, wrapped up in crepe tissue paper.

Late in the story, we visit a cemetery: A brand-new white marble angel pointing heavenwards, in a neat railed-in space covered with white marble chips. The discordant effect of this monument of bad taste was slightly mitigated by a large bunch of wine-coloured button chrysanthemums laid at the foot of the pedestal.

Snobbery is sprinkled through the text. Inspector Collier muses that "cheaper cars had made it possible for the businessman to move farther out of London" and suburbanise the countryside.

One of the characters comments: “I say, you’re not a bit like a policeman.” As she would have expressed it, he looked like a gentleman.

The Inspector meets the art school's owner: He was not Collier’s idea of a gentleman, but he was prepared to make allowances for a foreigner, even if he had been naturalised and had lived many years in England.

The students lodge in the nearby village. One of the landladies "goes out to oblige”, maintaining the fiction that cleaners were not servants who worked for money.

As in Artists in Crime, nobody talks to new students and this is simply accepted: Newcomers to Morosini’s were usually ignored during their first two or three terms... I got the idea that she resented being unnoticed. The new students have to go through that. Of course, if a girl is unusually pretty it’s different.

Nobody mourns the dead model, who was once beautiful and popular but is now rather over the hill at 35, poor dear. One of the characters opines: If she chose to try she could get any man, not for keeps, of course, but long enough to ruin him.” Another adds: I gathered that [her landlady] made a distinction between the steady boyfriend and the casual pick up, the latter not being allowed. Plus she scoops up the male students and they drive off to "road houses". These were new, vulgar Tudorbethan pubs situated on arterial roads.

One reader asked, "Did anyone ever talk like that?" I wonder if this kind of thing is what she meant:

Arnold speaking: If this is A.R.P. again, the mater is sick of all this fuss and nonsense and so am I, and you can go and boil your heads. We’ve got some friends in playing bridge, and I’ve got to go back so you can cut the cackle.

ARP stands for "air raid precautions", and ARP Wardens policed the blackout. If buildings were dark at night it was harder for the Germans to spot them. "Mater" is Latin for mother. "Boil your head" and "Cut the cackle and come to the horses" are old-fashioned slang.

Betty is described: She liked to be mysterious and say ‘Ha! Ha!’ and ‘I could a tale unfold!’ and that sort of rot.

"I could a tale unfold" is from Hamlet. “How sick making” is a hangover from the 20s. "Don’t mind me” means "Don't take any notice of me". "Wigs on the green" means something like "handbags at dawn", but I'm not sure why.

"Fond of the fleshpots and all that... nobody volunteers to beard me in my den" – these are from the Bible.

"And all that" is a contemporary tic.

Morosini's fiancée's "brother came here and called him a W*p and an outsider, and made her feel that by sticking to him she was being broad-minded and intelligent and all that.

Arnold was briefly a student at the school, but the staff didn't understand him: "I suppose they wanted him to draw accurately and all that.”

Other period touches from 1943? Too many people grind the stub of cigarettes into ashtrays. Brain storms and inferiority complexes are assumed to be real things. The fiancée has a flatmate who possibly resents her getting married to anyone, let alone an older foreigner – I'd have liked to see more of her.

Review of Artists in Crime here.
More golden age mysteries here, and links to the rest.