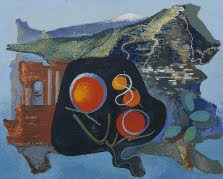 Alberto della Ragione was a naval engineer who started collecting contemporary art in the 1920s. He eventually gave it all to Florence, but at the moment it's waiting for its new home to open. So here are 40 from his collection, mostly dating from 1935-45, when the Fascist regime made being a modern painter difficult. The artists range from Giorgio Morandi through Renato Guttuso and Renato Birolli to Mario Sironi. They belonged to the socially conscious Corrente movement.

I know - you've never heard of any of them. Giorgio Morandi painted assemblages of utilitarian glass and ceramic bottles, with the odd oil lamp. His palette was a dreary range of muds, greys and beiges. His bottles (containers for laudanum, mustard, ink, jam) huddle together like crowds at a funeral.

Renato Guttuso was rather different. He liked painting naked ladies, despite not being able to draw very well. He was a bit too influenced by Picasso's Blue Period. But he was sometimes good in the sleazy style of a 60s pulp book cover, and his Roman roofscapes aren't bad.

Birolli and Sironi painted doomy roofscapes, melancholy nudes in grey rooms and views of smoky factories. After the war they broadened and coarsened their art, helping decorators create a "modern" look. It all became rather brash and vivid, like the interior of a burger bar chain. And then in about 1967 it suddenly looked out of date and plummeted out of fashion.

National collections show us the official history of art, and an artist's development. Works from private collections can give you quite a different view of an artist, or a movement, or a country. Were they rejected from public galleries for being sentimental, dated, commercial, too like 50s curtain material?

I'm looking forward to seeing the show. The picture above is Synthesis of Taormina, 1939, by Enrico Prampolini.

Yes, Italian art between the wars was a backwater. But these painters produced moody and evocative canvases. If I could take home one it would be Carlo Carra’s Bathing Huts by the Sea, 1941. The surface is thickly painted, with a palimpsest of earlier thoughts showing through beach and sky, while the simple huts loom meaningly. Felice Casorati’s Yellow Nude (1945) may be a Fauvist work several decades too late, but it is also a poignant vignette of a naked woman sitting in chilly isolation among stacked canvases. Giorgio Morandi was an understated genius – his quiet, atmospheric landscape etchings are as good as his more well-known crowd scenes of stone bottles and oil lamps. There’s a sad, brooding atmosphere in many of these pictures, and camouflage colours predominate – maybe the only reference to the war. Mario Mafai and Mario Sironi painted isolated houses among dark trees. One of the most compelling works is Mafai’s Wagons of Sturla (1942), of a closed fairground. The colours are jollier, but everybody has stayed indoors. I’m delighted to make the acquaintance of these artists – even Renato Guttuso, whose Scantily-Clad Women (1940) is kitsch and vulgar – but in a good way. His bravura style almost covers up his inept drawing.
Posted by Lucy R. Fisher at 19:55 1 comment: 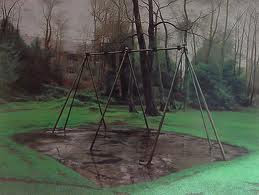 Sadly he didn't win the Turner Prize. George Shaw is a British painter who records the 60s estate where he grew up, on the outskirts of Coventry. The skies are grey, and more rain threatens. There's nobody about. He uses Humbrol paints, intended for model aircraft. The khaki camouflage shades suit our landscape and weather perfectly. He's the Philip Larkin of British art - or the Graham Greene - or the Alfred Hitchcock.

Here's a recent interview with him in the Guardian. And here's another interview in a piece I wrote in 2002 about Shaw and artists like him. Here's a slide show of his work, courtesy of the Guardian.

In his youth, he found that the kind of art contained in books — "drawings of dead Jesus, sliced lemons and bottles of wine" — had "little connection with growing up in a council house." At Sheffield Polytechnic in the late 1980s he found himself creating "as an art student, not a human being" — any kind of personal work had to be approached ironically. "Passion seemed to be discouraged," he says. "Any sort of little hint of interest in your work was immediately theorized, put through the grinding mill of pseudo-psychoanalytical art criticism."

One of the first things he did when he went to the Royal College in 1996, after a break of seven years, was to copy a list of some 2,000 works shown at the Royal Academy Summer Exhibition in 1979, thinking that reconstructing them would keep him busy. "The first title was something like Sunset in the Dordogne," Shaw recalls. But he had never been anywhere like the Dordogne. So he thought: "I'll do sunset over the garages round the back of me dad's house, rather than going and looking for somewhere that looks like art."

Shaw paints places that should hold a jolly crowd, like pubs and community centers, but they are always shut, with just a few lights left burning. In his pictures, it is always 3 p.m. on a winter's day, the time when children walk home from school and the pubs are closed — the hour that Christ died and the sky went dark, as he was taught at Catholic primary school. He says his paintings are "a mixture of fantasy and memory. I remember it being quite lonely and just wandering about a lot." Time magazine, 2002