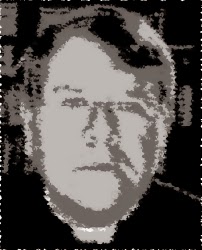 The BBC’s Father Brown “bears more resemblance to the Wikipedia entry for Father Brown than the character himself”. (at-scene-of-crime.blogspot.co.uk)

I have blotted out, as a thick cloud, thy transgressions, and, as a cloud, thy sins: return unto me; for I have redeemed thee. (Isaiah 44:22)

As useful as a catflap in a submarine. (Boris Johnson on “Red Ed”)

Australian PM Tony Abbott, who is as popular as gout.

The matter drags like a mist without wind. (Bulgarian proverb).

Therefore they shall be as the morning cloud, and as the early dew that passeth away, as the chaff that is driven with the whirlwind out of the floor, and as the smoke out of the chimney. (Hosea 12:3)

He scattereth the snow, and the falling down thereof is as the lighting of grasshoppers. (Ecclesiastes)

New gallery space seems to be covering London like a carpet of algae.

The recycling company occupied a building which looked like a tertiary college that had been abandoned after a nuclear accident, with long, unlit corridors and vast walls of peeling paint. It would have made a good headquarters for the warlord of a small, local militia. (Steerforth at the Age of Uncertainty)

This week is going interminably slowly. Like a traction engine at the Great Dorset Steam Fair. (Paul Stevens ‏@paul_d_stevens)

Serena's contorted non-apology is quite something. It has all the logic of an Escher staircase. (Dr Simon Sellars ‏@ballardian, 2013)

He no longer looked so much like a derelict fragment of newspaper. (Molly Lefebure)

When Mary Wollstonecraft begins to write about injustice, she goes off on one like a blender with the lid off. (@beerowlatt)

But we are all as an unclean thing, and all our righteousnesses are as filthy rags; and we all do fade as a leaf; and our iniquities, like the wind, have taken us away. (Isaiah 64:6)

Running makes me feel like a wrung-out floorcloth. (Leslie Costar)

He snapped the thongs as easily as a piece of string snaps when it comes close to a flame. (Judges 16:9)

Caledonian Road in snow is “as slushy as a Quentin Tarantino rom-com”. (Rupert Goodwins)