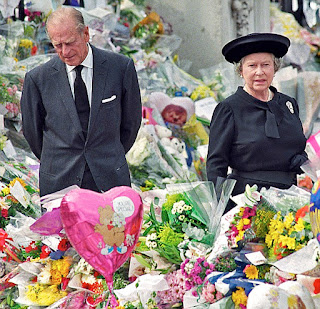 We'll complain that snow isn’t snowy enough, young people are young, and everybody does traditions wrong.

"Why won't the foolish young accept my wisdom when I say socialism is bad?" Every columnist in every paper for ever more. (@mrdavidwhitley)

Sarah Vine is doing that thing where you get older and pretend that your generation weren't like the current younger generation. (Helen ‏@lettertodaddy)

The internet fridge: a zombie idea that refuses to die. (Guardian)

There’ll be a terrorist attack or a disaster, and we'll immediately complain about public mourning, and piles of flowers in cellophane, and the Dianification of society. (In 2017 someone even suggested that all Brexiteers are Diana-worshippers.)

Old people will “block beds”. We will discover that care for the elderly is "in crisis" (with video of old people being abused).

And we really must do something about domestic abuse. It’s been on the list for simply ages. (At least 40 years.) But every time we mention it, someone will claim that as many men as women are victims.

Journalists interviewing white supremacists will be surprised that they are well-dressed and appear normal. We’ll be told “they’re a good person deep down”.

Someone will say “You know, white people are the real victims of racism” as if it was daringly original.

Many people will fail to understand the concepts free speech and censorship. Others will pretend not to know the meaning of common words like racism, fact and truth.

We'll be told that the shy, the old, the single, the disabled, the different are a terrible problem for “our” society. What can "we" do about "them"? "We" must try to understand "them"!

A columnist will write about giving birth in 2017 and ask why the process is still as grim as it was 40 years ago. She'll follow it up with: “Why did nobody tell me I’d love my baby so much?”
Why I, a middle-class journalist, did something ordinary like moving out of London.

The rules have changed! There’s no need to be middle-aged any more! 50 is the new 40 and with yoga, pilates, personal trainers etc you can keep your youthful figure! And 40 is the new 16 if you can afford the cheek implants, eye lifts, chin lifts, lip fillers, tan and perpetual holidays. But if you can, we’ve got the wardrobe for YOU!

Someone will point out that alcoholism isn’t confined to the working classes. Journalists will write hilarious pieces about how they quit the Dryathlon on Day Two.

Scientists will point out that all you need to detox are two kidneys and a liver. New “detox” strategies will make fortunes for their originators.

Discoveries will be made that will “force us to rewrite the history of art/human evolution”, usually in the direction of “far earlier than thought”.

We'll wonder what happened to the radio repair man.

Ugly fruit and veg will be wasted because supermarkets won't accept produce not up to “standard”.

Someone will “decode” the Voynich manuscript.
A truck will spill a funny cargo all over the highway (plastic ducks, treacle).

Journalists will confuse average age at death with average life expectancy at birth. (In the olden days nobody lived beyond 40!)


Zeppelins are back! The latest is Amazon’s floating warehouse for drone delivery. (Or was it the Airlander, that crashed on take-off and hasn’t been heard of since?)

People will try to come up with new gender-neutral pronouns, and claim that "at last" we can discuss whether women ought to remove all body hair. Are we reviving the 70s?

At the start of the school year, some school will hope to get into the papers and curry favour with Middle England by sending home 50 children for wearing garments that are “not uniform”. The head will come out with 50 silly reasons why uniforms and rules are necessary.

Someone will recommend we follow the Finns and the Japanese, and don’t teach children to read or do sums, or any facts at all, for the first two years of school, instead teaching “manners” and “character”. Others will recommend avoiding teaching schoolchildren any facts during their entire school career, instead teaching “resilience”, and how to run a business. (In June 2017 a head teacher called for GCSE subjects to be limited to five, in order to free up time for teaching "crucial life qualities".) Meanwhile schools will continue to be judged on exam results, and good “performance” will be obtained by excluding pupils unlikely to pass exams, and all the teachers and parents know this perfectly well.


And everyone will say "Children should spend all their time running about in the fresh air."

Is it possible for men to be secretaries? Can a woman eat dinner alone in a restaurant? (Haven’t seen either for years.)

In January I wrote: "By the end of 2017 we will have got used to the new fivers and will be flapping about something else, probably while wars rage on our doorstep."