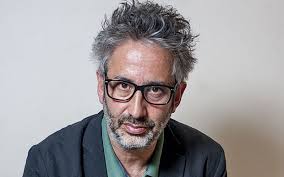 It has been a busy week for racism apologists, who have come up with many reasons why anti-Semitism is a) OK and b) not anti-Semitism. I have read or heard all these. (Do I have to say that I disagree with them all?)

"Jews are vermin, and are also secretly in control." (David Baddiel, paraphrased. Baddiel made a film showing that the Y-word was as bad as the N-word. “A progressive friend of mine said: “It’s not.” I asked why. He said: “Because Jews are rich.” Someone tweeted him to say the disputed mural “isn’t anti-Semitic, it’s justifiably showing up “Zionist greed”. (Times)

It’s OK to be anti-Semitic because Jews are white.
Therefore they enjoy white privilege.
And privileged people can't be victims.

It’s OK to be anti-Semitic because of what’s happening in Israel.

It’s not anti-Semitism if you just hate the bad Jews.

I’m not anti-Semitic because the Jews really are a shadowy cabal running the world and responsible for all of its evil.

The Arabs are Semites too.

Anti-Semitism is sent by God to ensure the Jews remain separate as the Bible says they should.

Jews are making it up.

Jews aren’t an ethnic minority because there are lots of minorities in Britain.

Never mind the 20th century, this is the present.

Anti-Semitism is not racism because the Jews are the establishment.

It’s OK to be anti-Semitic because the Jews are all rich.

Only victims can be victims of prejudice. (Versus “We shouldn’t help anybody because that’s just turning them into a victim” – the usual libertarian version.)

The Holocaust was awful, but that doesn’t turn Jews into an ethnic minority – they are a religious minority.

“Some seem to believe that anti-Semitism is exclusive to Nazism, that it appeared in 1933 and vanished again in 1945.” (Owen Jones)

The Labour Party is determined to tackle anti-Semitism in its ranks, but that wasn’t anti-Semitism. (Ad infinitum ad nauseam.)

No, you're racist because [reasons]. (And they always say it as if they were the first to have thought of it. Bit like “atheism is a religion”.)

"I'm not a racist, I just accept unpleasant truths others would prefer to suppress" is a thing racists say. It's a thing racists have been saying for centuries. (Angus Johnston @studentactivism)

Percentage of the population? That’s not what “minority” means. You can’t rewrite the dictionary!

Racism is OK because it has existed in every country throughout history.

I’m just saying what everybody is thinking.

Racist cliché bingo: White men built this country. Immigration is OK if the immigrants are white.
(If in doubt, accuse anything and anybody of being racist.)