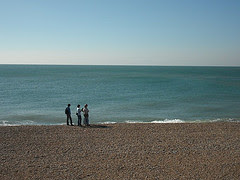 No one told me that having fun is not as fun as I thought. Unmarried 38 year old Times Feb 5 09

Reality is that which, when you stop believing in it, doesn't go away. Philip K Dick

It took me years and years to understand how people promote themselves, not just in this business, but in life. Gina Mckee

Have you noticed that people who, as a response, say, "Life isn't fair", are mostly the ones who have nothing to worry about? @franosch

Settling into your own home, particularly once you have children, is a rite of passage that few of us seem prepared to give up. John Stepek

Sometimes you have to push the reset button and start over. Don't let your history stop your destiny! @6london

Self-approval is acquired mainly from the approval of other people. Mark Twain

You are stuck with the persona you are wearing when the wind [changes]. Guardian 7/20/09

Later on he much preferred strangers to his own family, because they kept out of his bathroom and he was free to present his own idea of himself without the risk of some one remarking, "Why, Reggie! You loathe poetry! How can you! You always said it was such humbug!" Joking Apart by the Hon. Mrs Dowdall

Human nature is much the same everywhere. Miss Marple

“They mistakenly believe that everyone is remarkably different from everyone else.” psychcentral.com

The trouble with many of these positive thinking doctrines is that they encourage you to try to convince yourself you can run before you can walk.

Most people are not the Amazing Kreskin. (everything2.com)

You need to learn that getting a paid job in the arts will be very, very difficult and is not something you should feel entitled to. @Beaverlasvegas In Dear Jeremy column, Guardian, Feb 5 11