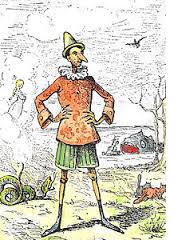 A man accused of taking photographs up women’s skirts at a wedding reception near London Bridge has said his suspicious-seeming behaviour was just his nervous twitch. (London 24)

We were advised that period shows work better if they are set within living memory, so that’s why we updated it. We wanted the TV show to be anchored in a time and a place – unlike the stories. My feeling was that the stories had a timeless feel to them anyway. (Producer of Father Brown)

Once in an exam analysis meeting, a school leader who taught in a particular department said that the reasons the exam results of that department were so poor was because of their outstanding teaching. They concentrated on independent learning and refused to ‘spoon feed’. This obviously meant kids did less well in the test. (quoted by David Didau on learningspy.co.uk)

BBC is cancelling the Tommy and Tuppence series because of “David Walliams’ busy schedule”. "It was the right building on the wrong site" – architect’s defence. (Rob Cowan ‏@cowanrob )

The Hungarian PM says that Hungary can’t accommodate any refugees from Syria because, unlike Germany, “Hungary isn’t used to foreign religions”. (Hungary was pagan until 1000CE and used to have a large Jewish population.)

Our alleged sexist remark was “probably out of context, probably self-deprecating, probably misreported”. (via Adam Rutherford)

In September 2012 Superintendent Andrew Parker, then a member of Rotherham Safeguarding Children’s Board, told the Rotherham Advertiser that the leak was “disloyal”. “The consequence is that victims will be less trustful of giving us access to their lives and concerns. It’s completely destructive to the confidence we are trying to build and it’s exploitation in itself.”

You can't just ask people to behave ethically just like that. (Sepp Blatter)

@NickyMorgan01 and @TristramHuntMP both say that they are against compulsory governor training as it would put off volunteers.

We have to oppress women because they are weaker than us and have babies. (You don’t hear that one so much any more.)

Police union: "Appalled and frustrated" with charges against officers, which they say are a "rush to judgment". (re the case of Freddie Gray, who died in custody)

Kylie Jenner (17) at last admits she has had lip filler: “I have temporary lip fillers. It’s just an insecurity of mine, and it’s what I wanted to do. I’m just not ready to talk to reporters about my lips yet, because everyone always picks us apart.” (Earlier she claimed it was all done with makeup.)

“I’ve always had a problem when it comes to telling the truth on the internet, to be honest. After realising the effect my bravery in my illness had on people, I then used it as a vehicle to try and get some of the idiot emo kids on LJ [LiveJournal] to buck up and realise they don’t really have it all that bad … the lie was worth something, wasn’t it? How bad is a lie if it helps?” Said “Limeybean” who faked illness and death from TB on the internet.

It was all a long time ago.
Just saw someone saying they’re not voting because ‘voting gives legitimacy to politicians’. (Tom Hatfield ‏@WordMercenary) April 2015

Judge caught driving defendant's car says he was "Just looking after it”.

It has been argued that releasing Prince Charles’s "black spider memos" would undermine his neutral political status. (BBC)