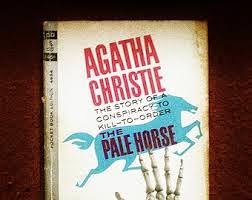 It's hard to slim down to five from a short-list.

From Blue Train, Vicarage and End House I’ll pick The Mystery of the Blue Train – because it gives hope to 33-year-old spinsters who have spent their whole lives in country villages wearing “Balbriggan” stockings. They can read this book and vicariously enjoy Katherine’s legacy and taste of life on the Riviera. Poirot is a universal agony uncle, and reveals a tendresse for a dubious gem-dealer called Zia Papopoulos.

From Death in the Clouds, Murder in Mesopotamia and Cards on the Table I’ll pick Murder in Mesopotamia. All three have young women as central characters but I particularly like Nurse Leatheran, who narrates this story. She is funny (sometimes unintentionally) and down-to-earth, and gets on well with Poirot, though she thinks the archeological dig looks like a lot of old mud. It is also a good one to wave in the faces of those who claim that all Christie’s books are set in English country houses.

From Appointment with Death, Murder is Easy and Sad Cypress I’ll pick Cypress for its suffocating atmosphere of a big, cluttered house whose owner has just died. The heroine finds herself lunching off fishpaste sandwiches and sorting old fur coats on a summer day while her fiancee falls for another girl. (It’s quite autobiographical.)

From Evil Under the Sun, Murder is Announced and Mrs McGinty’s Dead I’ll pick Mrs McGinty as it is one of Christie’s funniest. Not just the situation – Poirot is a paying guest in the house of the worst housewife in the western hemisphere – but the narration is more ironic than usual. (“An approved school had opened its doors and Lily had disappeared from the everyday scene.”) The death of a charwoman is linked to five historical murder cases involving young people – could one of them be living in the village under a new name? Poirot acquires a sidekick, a rather vulgar girl who works for an estate agent. (As they walk away from the village shop “Mrs Sweetiman, her nose glued to the pane, wondered if that old foreigner had been making suggestions of a certain character...”). And then Mrs Oliver turns up, scattering apples...

From Hickory Dickory Dock, The Pale Horse and Third Girl... It’s a hard choice. I love Hickory Dickory Dock with its hostel full of friendly students. In Third Girl Poirot and Mrs Oliver ponder the modern world in which groups of girls share flats on their own and refuse to “make something of themselves”. We even get a snapshot of a provincial high street with its frumpy dress shops.
It has to be The Pale Horse. No Poirot or Marple – the sleuths are Mrs Oliver, Mrs Dane Calthrop and an architectural historian called Mark Easterbrook. It ranges from a Chelsea coffee bar full of rich delinquents to a fashionable Soho restaurant to an upmarket flower shop to a greasy café to a half-timbered cottage with three very sinister inhabitants. They seem to be in the “removals” business, with the help of trances, a “black box” and the blood of a black cockerel. Could they be connected to a list of people who have unexpectedly turned up dead? The plot takes in market research, art restoration and plastic buckets. Read it!

The BBC Radio Drama version is very good, too.