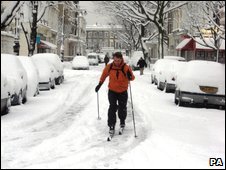 Post-Christmas, there’s an outbreak on Facebook of denigrating the Express and its snow panic tendency. “I remember when they promised blizzards for 30 days! Nary a show shower!” ad infinitum ad nauseam. (It has been an unusually mild winter.)

Dec 31 Jan Moir in the Daily Mail says “the youngest victim in the Epstein/Maxwell scandal was 14... When she was 15, Greta Thunberg began the school strikes and public speeches which made her an internationally recognised climate activist.” Therefore, she continues, 14-year-olds are adults...

On Twitter, people are accusing JK Rowling of taking After Eights and leaving the paper sleeves. (She has written several articles claiming that biological sex is real, with the concomitant backlash – including rape and death threats.)

This kind of thing is popular: The less people know, the more stubbornly they know it. (@zardor13 Jan 8 2022)

The man chipping bits off the BBC’s Eric Gill sculpture was “just attention-seeking” of course, and we should “separate the art from the man”. Cliché bingo.

Empty supermarket shelves are not a problem – you just need to know how to cook! Find a substitute!

Bullying red-haired people is one of the last socially accepted forms of discrimination, the head of a human-rights charity has claimed. Chrissy Meleady, chief executive of Equalities and Human Rights UK, said that while discrimination against redheads occurred worldwide, it remains “particularly acute” in the UK. She insisted it was not “harmless banter”. The Week (The law is patchy and lacks an over-arching principle.)

Nobody bothers cleaning up or obliterating graffiti any more. There’s just too much of it. People have come to like it and think it’s colourful. Which is sad for those of us who like plain grey concrete.

Apparently in the era of working from home, fake job interviewees are becoming a thing – you hire someone to interview for you.

How long will the police continue to misuse the “rotten apple” metaphor? As anyone who’s kept apples in a loft knows, one mouldy apple rots all the others.

“Young people want to have a civil rights fight of their own”. Hadley Freeman claims gender ideology is a "great way" for younger women to tell off their mums. (unherd.com)

Creative use of Leonardo da bloody Vinci: What, and I cannot stress this enough, have I just read? (It's called tmesis.)

Accusing your opponents of “pearl-clutching” is a clincher, apparently.

pelotons (Originally a group of cyclists on electric bikes “pacing” a competitive cyclist, now a tablet you fix to your static bike that plays videos of cheerleaders who yell “You’ve got this!”)

invasivore (They cook American crayfish with Japanese knotweed) and climavores... well, what do they eat? Quinoa from Essex?

Weird take on climate change: We shouldn’t do anything about it because it’ll be good for humanity to die out.

“Intersectionality” means “feminism includes transwomen”. It also means "I am a member of this oppressed group and this one and this one so I have more marginalisation points than you". (They may have a point.)

horizontal hostility: Members of progressive movements fall out with each other (probably over indetectable theological differences). The closer a minority group is towards the mainstream, the more likely it is to have hostility directed towards it by the more ‘distinctive’ or extreme groups that are similar to it. (Ian Leslie, substack)

When I cried they told me I was being manipulative.

Oh, no, manufacturers are trying to sell low-rise trousers to a whole new generation.

Astroturfing and foxes in charge of henhouses are popular – or attempts to right wrongs neutered and sold back to the public as the real thing. Inquiries and Commissions are headed by people who don’t believe that women/black people are disadvantaged. This ploy includes subtly changing all terminology. See Dickens' Circumlocution Office. The vitamins we destroy in the canning, we restore in Revito; the roughage we remove from Peabody’s Piper Parritch we make up into a package and market as Bunbury’s Breakfast Bran. (Dorothy L. Sayers, Murder Must Advertise)

Russia invades Ukraine. People use “compass” to mean “moral compass”, as in “Putin has lost his compass.” How does he know where to send the tanks? (2022-02-24)

Dimwitted libertarians are still calling masks “muzzles” as if they were the first to think of it and it’s terribly clever.

Lots of moans about “weather panic” as successive storms are predicted. Storms kill 16 in Europe and trees fall like ninepins. Will the moaners apologise and admit they were wrong? Will they moan as bitterly next time bad weather is predicted?

The next excuse (when Russian tanks trundle across the Ukrainian border) will be that they’re ‘just getting their ball back’. (@Everbleaky)

Here is a thought about this Russian column trundling to Kiev. (@roscoforindy)

The problem here is that people don't seem to be able to comprehend what war actually, physically consists of - imagine the Russian (or any other tanks) were trundling down their street... (@trevorshapiro1)

When did “subtitles” become “closed captions”?

Upsides to Covid: Daytime TV presenters and participants can't be touchy-feely and invade each other's space. I hope this lasts.

Priti Patel did not say that Ukrainian refugees could come here if they were willing to pick fruit – it was a tweet from a Tory MP.

Some men and boys grew their hair during lockdown and haven’t had it cut.

Price of fuel going up – look out for “stockpiling” and “panic buying”.

What does “bad faith” mean? Insincerity? "You're arguing in bad faith" seems to mean "You're disagreeing with me" – as usual. Perhaps it means what we used to call a "hidden agenda".

Broodmare is popular week of March 14.

Anything you don’t like politically is a “stain”. Prince William says slavery “stains history”, week of 2022-03-24.

Oh good grief, what has Putin to do with JK Rowling? Shouldn’t we concentrate on Russian funding of the Brexit campaign, and Trump?

It was my first taste of people treating me like a thought leader in the relationship space. (Relationship guru Matthew Fray gives us a sample of his work.)

Oh no, people are thinking up nonbinary alternatives to boyfriend and girlfriend. Datemate and joyfriend are two of the least ghastly. Thought we’d got over that in the 70s and 80s with Significant Other and POSSLQ (person of the opposite sex sharing living quarters).

When did toe pads become “beans”?

Everyone is piously outraged that Will Smith slapped Chris Rock at the Oscars. Rock had made a “joke” about Jada Pinkett Smith losing her hair. This is a country where the police shoot black people on sight, and neo-Nazis run over left-wing protesters. Oh, and many people own repeating rifles and occasionally go out and mow down large numbers of people. The Oscars ceremony traditionally hires a comedian who will insult everybody. What is all that about? Americans, please explain.

What if, and hear me out, ... (something controversial).

“Photo opportunity” now means “have yourself photographed next to someone wearing inaccurate Victorian police uniform outside the Sherlock Holmes Museum that isn’t even in Baker Street”.

“The world has moved on” is this week’s all-purpose excuse. Particularly for Partygate. 2022-04-04

Some reviews of new films just list the pop culture references. They said pop would eat itself.

It seems like the nonsensical phrase "born in the wrong body" has been replaced by "be who they truly are". (@NeurolawGuy)

Someone on Twitter defined asexual as “not interested in intimacy, romantic gestures or commitment”, and we’ve all met him before. Didn't we call him a "toxic bachelor"?

A childless man on FB has just used the words “full social acceptance” (denied to the childless). To say the word is to assent to the concept.

I am on a Facebook group about surviving energy poverty where people share tips like ‘leave a bowl of water in the sun with a black bin liner on top and it will be warm enough to wash up in later’.  (@FelicityHannah) Reminds me of 70s suggestions that you make your own tumblers out of old wine bottles. The method involved a red-hot poker, some cooking oil and hours – weeks – spent filing the sharp edges by hand. If they could afford wine, why couldn’t they afford tumblers? Perhaps it's time to revive the old hippy approach to getting stuff for free. The Alternative Society always was the Parasitic Society. Everything contains its opposite.

Twitter has moved on from “this hellsite” and is now “this bird app”, as it if was the Site that Cannot Be Named.

Did the government really say it would be legal for drivers of driverless cars to watch films en route? Am I dreaming again?

2022-04-23 Some anti-vaxxers are now supporting Putin. Because the US, which imposed masks and vaccines, is the real tyrant. Lefties are also supporting Putin because NATO, and the US again.

Queen’s Platinum Jubilee coming up – brace yourselves for a wave of competitive indifference.

On ebay, “vintage” and “Art Deco” mean “made yesterday”.