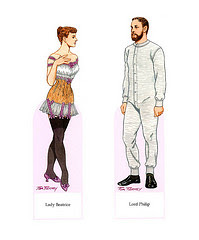 Some words have an inbuilt "boo!" or "hooray"! These are all boo words.

judge by appearance My child got into a fancy nursery, and I don’t want to be judged by my appearance, so I now take 20 extra minutes to “freshen up” exclusively for the school run… I want to make sure my son doesn’t suffer from various forms of social or even educational exclusion. Guardian September 24, 2011 She clearly wants to be judged on her GOOD appearance.

brigade A group of people you dislike (The PC Brigade are out in force. In those days we weren’t plagued by the green brigade!)

dusty (see musty, fusty and stuffy) We all use jargon in our everyday jobs, and management jargon is perhaps the most derided, but to its practitioners it adds a richness of understanding and illustration than no amount of dusty brevity can convey. Letter to Independent, June 2011 He was being ironic (I hope).

escapism = much derided in the 70s, when “escapist literature” was looked-down on

fussy The image... shows the statue displayed at the Dusseldorf Gallery, New York City. "Notice the striking contrast between the fussily overdressed Victorians gazing in fascination at the uncluttered white marble nude," Kasson comments. And notice how superior and liberated we are. See fusty, stuffy.

gawp Other people gawp at popular art exhibitions, we look.

guzzle, sniffles This happens everywhere, from GP surgeries in Britain and the U.S. - where antibiotics are the medicine of choice for just about every minor childhood snuffle [usually sniffle] - to India, where antibiotics are available cheaply over the counter without a prescription. Here... they are guzzled by millions every day. Daily Mail Aug 2010
heavy, heavily Heavy accents, heavy sauces, heavy decorations - we look down on them.

influx, onslaught of a flood of immigrants

mob Crowds of people who aren't university lecturers and don't live in Hampstead, Crouch End or Notting Hill. There was a lot of "mob" hysteria in the broadsheets about 10 years ago. “On gender selection … the feelings of the mob are to be enforced.” Catherine Bennett, Guardian November 13, 2003 (A Mori poll showed that many people were against gender selection.) Shun this mob of pariahs: Memories of dead children are defiled by those who bay for vengeance and scorn real justice Mary Riddell Sunday August 25, 2002 The Observer

mollycoddle Assumes being nice to children is bad.

monger Costermongers just sell apples. But an opinion monger, rumour monger, scaremonger or doom monger is clearly up to no good.

nostalgia In the 70s, “nostalgia” was knowing anything about the past, and preserving bits of it instead of destroying every shred.

peddling Someone you disagree with is expressing his views.

peer pressure Forces you to get a sunbed tan and buy “brands”.

petty bourgeoisie, kingdoms, officials, bureaucrats, traders The bourgeoisie were only small, or “petit”.

rote-learning Children must either be forced to do it, or protected against it at all costs.

scrawl Graffiti is always scrawled on walls, even when artistically spray-painted.

scrub What will grow if we don't allow agribusiness, prairie farming etc.

strenuously People we don't trust "strenuously object" or "strenuously maintain" things. When they "strenuously deny" doing something, of course they did it. "They have been strenuously keeping everyone else out of the picture." Climate-change skeptic "books usually quote the specialist in insect-borne diseases, Professor Paul Reiter, who has strenuously and effectively attacked the idea that increasing temperatures will necessarily produce a rapid rise in the incidence of insect-borne diseases." "It is hard to rise above your material – and the play is, for all its strenuously attempted wit, as dead as the two men it describes."

thrashing about, jump into bed, tryst, fumble Sexual encounters you disapprove of.

trappings accoutrements, perks, badges of office which we aren't impressed by; expensive tasteless things that nobody really needs

wallow He has wallowed in the trappings of the good life Guardian October 24, 2010 He could have just “enjoyed” them.

worthy uncommercial, unexciting. Ought to refer to saving the planet or collecting money for refugees but also applied to things that might appeal to the planet-saving demographic – free mask-making workshops for kids which are NOT an (expensive) day out at (common) Alton Towers. (See talky and dirge-like.)