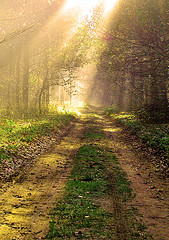 Near the end of film/documentary: foreign train comes towards us in slow motion through forest of wires to doomy music.

Flute plays pentatonic tune, drum joins in = Native American takes gun out of suitcase and starts to polish it. He will turn out to be a policeman.

Urgent drumming = cheetah chases antelopes, gibbons swing through forest canopy, herds of wildebeest gallop to waterhole where one of them will be killed by an alligator in slow motion.

Upward appoggiatura on bamboo flute, long-held overblown note: we are in the Amazonian rainforest.

Three random Swanee whistle notes, in descending series: we are in the Amazonian rainforest – 400,000 million years ago.