Singing in the Shrouds by Ngaio Marsh 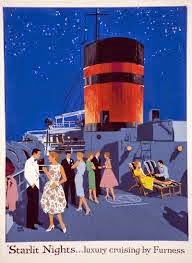 Singing in the Shrouds has a "lifeboat" plot: some disparate characters are sailing to South Africa as passengers on a cargo boat. It was published in 1958.

Among those present are:

Mrs Dillington Blick, a large but beautiful divorcee of about 40. I see her played by Diana Dors.
Mr and Mrs Cuddy, who are aggressively lower middle-class.
The hard-drinking captain.
Miss Abbott, an expert on early church music who is broken-hearted because her best friend has got engaged.
Aubyn Dale, a David Frost-like character who fronts a confessional TV show. He also has a drink problem and an oily professional manner, but he's not all bad, even if he does advertise ladies' swimwear.
Dennis, an endearing gay steward.
Tim Makepeace, the ship's doctor, an upstanding young man who falls for...
Jemima Carmichael, who is on the cruise to forget that she has been stood up at the altar.
Mr Merryman, a retired schoolteacher.
Father Jourdain, a high church monk and priest.
Donald McAngus, an eccentric elderly Scotsman.

Roderick Alleyn, under cover in search of the "flower murderer", who may be aboard.

The "flower murderer" has strangled several girls at ten-day intervals, and strewn their bodies with crushed flowers and broken necklaces. The action plays out over several days as the cast travel to the tropics. The various characters reveal more about themselves (I believe this is known as "character development") as Alleyn tries to steer the conversation towards what they were all doing on the night of the murders - particularly the last, which took place the night they sailed. The flower murderer sings as he kills - but his voice could be a man's or a woman's.

The story starts on the bus transporting the passengers to the docks – they all reveal their characters in various ways. Father Jourdain chats to a brother who has come to see him off, Mrs D-B discusses the other passengers with a friend ("My dear!"). Miss Abbott catches up on the murders in Mr Merryman's newspaper and he tetchily requests her to stop reading over his shoulder. Tim points out places of interest to Jemima.

Once on board, both the captain and Dale fall for Mrs Dillington Blick; Mr Merryman is inclined to get cross about pedantic points (he hates the "tele-viz-ee-on"); Father Jourdain tries to keep the peace. We enjoy the cruise with everybody as they give cocktail parties, stop off in the Canary Islands and rig up a swimming pool on deck.

But then a broken doll is found - strangled with a string of beads. Alleyn takes several of the men into his confidence (after they've established alibis). The captain is already in the know, but refuses to believe there's a murderer aboard. Father Jourdain and Tim Makepeace agree to make sure the ladies are never alone. Mrs D-B is delighted to find herself shadowed by some bloke wherever she goes. Her nickname for Alleyn is "the gorgeous brute".

But they fail to prevent the next murder - and the reveal of the killer's identity is quite dramatic. Less convincing is the Freudian explanation for his actions. I prefer Father Jourdain's (sin).

And yes, social attitudes are of their time. Society was becoming more accepting, but homosexuality was treated rather nervously as a joke. (The law was not relaxed until 1967.) Both Marsh and the characters laugh at Dennis and Miss Abbott. The Cuddies, also, are turned into grotesques, with their tales of masonic lodges and each other's ailments. They even call each other "dear"!

But this is an enjoyable book, and a time-capsule of the late 50s.

More on Ngaio Marsh here, and links to the rest.

Was Marsh a snob?