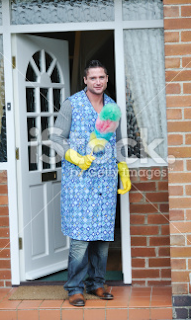 Leprechauns
Scots sometimes complain that the English have reduced their culture to Tartan Shortbread (and kilts and bagpipes). Worse than the Tartan Shortbread reduction of culture is the comedy version: for the Irish, green bowlers and red wigs, leprechauns turned into figures of fun (they were probably fearsome spirits), comedy Irishmen on the music hall stage. Folk music dwindles to Hava Nagila/Greensleeves/Paddy McGinty’s Goat/the White Heather Club. What's worse, some people think that IS their culture and love it.

20s Throughout the 20s, girls wore very short dresses, had bobbed hair, danced the Charleston and said “Vo de oh do”. (Skirts lengthened after the war, rose sharply circa 1925.)

40s All girls wore their hair in a “victory roll”.

90s Er... Apparently teenagers of today have no idea about 90s music! (Neither have I.)


New Agers
Chris Addison and Amelia Bullmore starred in a couple of ads for... insurance? (See, they work.) In both, Amelia Bullmore was a "New Ager". In one incarnation, she’s wearing a psychedelic scarf and headband and talking about feng shui. She comes back as a crystal gazer in a white turban, who forces him to sit in the Lotus position.

Zoopla are following the same script with a woman who has looked up the property details and is pretending they are coming to her through the ether by waving her arms about.

Nerds
There are many ads showing an inept team making a boring ad. There’s always one trying to be Richard Ayoade. Only BT Infini’y got it right.

Poshos
The 40s film Kind Hearts and Coronets portrayed the Victorians as speaking with “veddy, veddy” posh accents. Partners in Crime in the 80s portrayed characters in the 20s as impossibly posh (when they are middle class and have jobs – as private detectives).

When the One Show got a researcher to pose as as an “avant garde artist” whose art was a pile of rubbish, she donned a flowery maxi-skirt and headband, and put on a ludicrously “OK yah” accent. It was a distorted version of the Sloane Ranger stereotype of the 80s (which had some foundation in fact – but I still don't believe anyone ever said "OK yah"). Why should a conceptual artist be posh?