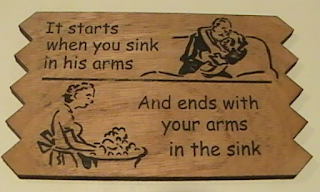 In the 70s, relationships were abolished. Nobody was going to get married, or even pair off, any more, because it was patriarchal, or something. And women didn't need to get married now that they could have jobs. That lasted. And the world may be going to hell in a handbasket, but at least people are more honest now.

Until "the right moment occurs... you know, we women never mean to have anybody." (Mrs Smith in Jane Austen's Persuasion)

I didn’t realize I needed a date for my mother’s funeral! (Miranda, Sex and the City)

You cannot come to cricket on your own – it demands a relationship. (Female cricket fan in the Times)

In reality, most people could happily pair off with a large number of potential partners, and the factors that determine whom they do pair with have as much to do with circumstance as anything else. Relationship success basically depends on three things: individual characteristics, like whether you’re smart or what kinds of hang-ups you have around relationships; quality of interaction, or how you hit it off in-person; and surrounding circumstances — stuff like your race or health or financial status... Dating is a market unto itself — a market that heavily penalizes over-30s, already. (Washington Post)

Results of an imbalance in male/female birth/survival: Imbalances in the marriage market will increase continuously till 2050-2060. ... increasing male age at marriage will be the most common.
Criminal organisations (human trafficking) and unorthodox arrangements (prostitution, fraternal polyandry) may flourish. Sexual and marriage markets will closely coincide with the socioeconomic market (exacerbated socioeconomic marital sorting). Matrimony may gradually become a new and more disputed status symbol rather than a decisive but inevitable life transition event.

It is also a sign of pressure to find the right (or an appropriate) partner. You refer to rules when you want to avoid investing time in something that has no longterm future. (Dating expert, Times Nov 2015)

There aren’t any men, any single men. There never were, and now there are even fewer. (Shane Watson in the Times on the death of the dinner party Nov 2015)

As a parent there are certain milestones in your child’s life that you look forward to: first steps, graduation, saying “I do”. (Louise Minchin on BBC Breakfast)

The traditional ways had failed. Some had been waiting for years to encounter a suitable partner within their social circle, under the conventional conditions. Ordinary life, the editors insisted, was no match for the possibilities for partnership that are available through the Journal. And nor was ordinary life what it had once been. People used to meet their partners through proximity, through family and friends, through introductions furnished by social acquaintances. But as the economy changed and both men and women moved away from their families and into urban centres, the means of introduction were removed without the rules of etiquette changing quickly enough to prevent loneliness for this generation. (Jezebel, on romance in the 1880s)

Not unlike a man on Tinder who can advertise for a partner who wants to “Netflix and chill,” making it clear that relationship-seekers need not apply... The technology isn’t changing human relationships; it’s just showing them for what they really are. (Jezebel)

If someone went to school to learn about how to pick a life partner and take part in a healthy relationship, if they charted out a detailed plan of action to find one, and if they kept their progress organized rigorously in a spreadsheet, society says they’re A) an over-rational robot, B) way too concerned about this, and C) a huge weirdo. No, when it comes to dating, society frowns upon thinking too much about it, instead opting for things like relying on fate, going with your gut, and hoping for the best. If a business owner took society’s dating advice for her business, she’d probably fail, and if she succeeded, it would be partially due to good luck—and that’s how society wants us to approach dating. The respectable way to meet a life partner is by dumb luck, by bumping into them randomly or being introduced to them from within your little pool. The types of fear our society (and parents, and friends) inflict upon us—fear of being the last single friend... are the types that lead us to settle for a not-so-great partnership. (Quartz)

I’m 13... all my friends have boyfriends and are living a wonderful life... whenever I try to discuss problems, my friend immediately changes the topic. (Writer in to Mariella Jan 2016)

Women are culturally prodded toward relationships from day one. (Jezebel)

In this life one needs fortitude. My private life is terribly lonely. My public life is a mass of chance acquaintances, casual friendships and much mail. If this is fame then it is EMPTY. (Book-dealer and writer Fred Bason)

How long can you live by yourself and still stay sane? (Max Dunbar)
Spies are supposed to live without sympathy – it can’t be done. (John Le Carré, paraphrase)

We are told ... that the lady involved should be of much higher station than the lover, that she should be located at a distance, that the lover should tremble in her presence, and that he should obey her slightest wish. He should, moreover, fall sick with love, faint when he sees a lock of the lady's hair, preserve his chastity, and perform great exploits to attract the attention of the lady. All this seems to me a terrible nuisance... (Essay on Courtly Love by DW Robertson, who says it’s all an invention of the 19th and 20th centuries)

In real life, older women, particularly older single women, are all too often dismissed, facing a toxic blend of sexism and ageism. (bitchmedia.com)

Faced with the grim fate of possibly never finding a life partner, Filipino bachelors competed fiercely for the few Filipinas around. Those who lost this game of high stakes and were desperately lonely frequented the taxi-dance halls and/or visited prostitutes enjoying, albeit briefly, the company of white women. [The dance halls] catered to socially-isolated men who would otherwise have been ostracized from public dancing. (Mina Roces)

The best advice to anyone wanting to use an app is to be very clear about your own boundaries for commitment and intimacy and to stick to them. If you’re looking to form a relationship then be up front about this and take your time getting to know someone - that advice goes for men and women. (Indy April 2016)

I'm too scared [to date]. I've never dated before. When I was at university, you just slept with each other. There was no dating involved. You just... had sex. Then I met Geoff, and that was that. (Victoria Wood)

Over the 25 years of their intense, abusive relationship, he demolished her confidence and ruined her ambitions. (Alexander Masters in the Guardian on discovering diaries in a skip. “E” told the diarist she was a “silly ass”, “stupid” and “weak in every way”.)

The diarist’s life spans that postwar generation who came of age in the 1960s, was inspired by art, cinema and literature but for whom settling down to married life was still the expected norm. (Melissa Katsoulis on the same book)

Not sure what makes me feel older: our last unmarried close friend getting wed today or looking forward to power-hosing the patio tomorrow. (James O'Brien ‏@mrjamesob Hounslow, London)

Women are expected to marry in their early twenties. Failing to do so can lead to social exclusion. (Times, talking about Saudi Arabia)

Society, complained one 29-year-old cake smasher, dictates that at 30 she should be married with children. (Times June 2016)

I’m at an age where everyone in my social circle is getting pregnant (Dear Prudence, slate.com)

Doctors told my parents that I would never find a man who would love me... (Intersex person in Guardian July 2016)

I should have considered it far longer than I did. But I was anxious to get married and settle down. (Evelyn Gardner on marrying Evelyn Waugh)

I have most loved people who cared little or nothing for me and when people have loved me I have been embarrassed ... In order not to hurt their feelings, I have often acted a passion I did not feel. (Somerset Maugham)

A friend was recently talking about a male friend who is starting to feel the engagement pressure. Mainly because his younger brother recently got engaged, followed by his best friend two weeks later. (thedebrief.co.uk)

It was like I suddenly woke up and all my friends were buying houses and talking about babies and I felt so alone. (Issy Suttie)

As a longtime mistress, you have very little say in where your boyfriend’s children go to school, no matter how sound your reasoning. (Mallory Ortberg, slate.com)

[People ask] why must Bridget Jones fall for bad men? Why is she so self-absorbed? Could she not spend these books living an enlightened, guilt-free, empowered existence, engaging only in political activism, literary discussion of restrictive gender-normative tropes and good works for the poor? ... [Do we really need] another woman ... trying to live another deserving, upstanding, perfect and dull life, like some kind of angry, teetotal, hectoring nun? A woman dedicated to being an example. (Caitlin Moran on Bridget Jones Times Aug 2016 Nobody ever wanted to be this woman, they just thought other women ought to be her.)

You can be with someone kinda a li’l bit hotter or less hot than you, but if the levels are too off, people are furious. It’s sick and sad. (Amy Schumer)

"How soon should I reply? Can I say something yet? Should I call? I know I shouldn’t text him, but…" My advice, ingrained in me by years of comparable counsel from comparably responsive female friends, is always to wait. Waiting is the rule, the convention, tacitly enforced by men who retreat from female aggression and actively perpetuated by women who self-police. (iasc-culture.org Interesting that a woman taking the lead is called “aggression”.)

On average, a widow loses 75 per cent of her support base after the loss of a spouse, including loss of support from family and friends. (Boston Globe and Mail)

Once she saw to whom I was married she was NICE - AS - PIE. (@Highgatemums)

To find a husband in these competitive days one cannot do better than became a Lyons waitress. A pretty “Nippy” is nipped up in no time. (Quoted in Beautiful Idiots and Brilliant Lunatics, Rob Baker)

After NYE gig, I asked one of the security guards how the evening had been for him. He told me how sad seeing all the couples had made him. Friendly, strapping, good-looking, young lad working in a glam nightclub can't get a girlfriend. "Oh, mate," I said. (Damian Counsell ‏@DamCou)

"The real fear was that you were going to be so bright that you would put men off," recalls a St Mary’s Wantage old girl... in the late 60s. (Daily Mail)

A true relationship is when someone accepts your past, supports your present, loves you and encourages your future. (inspiringandpositivequotes.com)

My dad always said I would never get married.... I was in my forties, in the prime of my life. Maybe in those eight years I would have met someone and fallen in love and had a baby. (Stevie Nicks, who lost years to drug addiction)