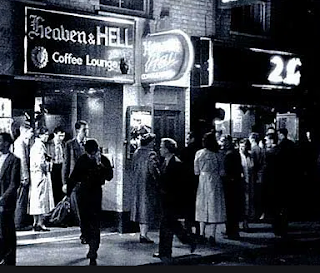 In this self-published 2004 book, Pendergast lists Christie’s many “mistakes” in construction or believability, but his text is full of typos, misunderstandings and slabs of repetition. He helpfully lists makes of car driven by Christie’s characters, all dedications, and all mentions of newspapers in the oeuvre – but doesn’t tell us which publications are fictional. (Don’t waste time looking for back copies of the Daily Yell.) He was Canadian, and is sometimes baffled by England, the English – and the Irish.

He tells us that “damme” is “a peculiar spelling for the word damn”. It is a polite way of writing “damn me”.

Mr Satterthwaite and Mr Quin meet at a “high class restaurant such as Arlocchino”. The friends meet sometimes in the Arlecchino (Italian for Harlequin), a downmarket restaurant in shabby Soho (pictured) that’s known for its excellent food.

In Taken at the Flood, “David calls his fake sister Mavourneen and a couple of lines later alanna in small case letters but her name is Rosaleen. He only does this once and there is no explanation or obvious reason he would suddenly call her by these two unrelated names.” Both mavourneen and alanna mean “darling” in Irish.

He assumes actress Jane Hellier (The Tuesday Night Club) is “dimwitted”, whereas she is cleverly running rings round her audience by playing dumb.

The book contains a dubious guide to British idioms:


“Enquire within upon everything” means look thoroughly. It is the title of a Victorian compendium of useful household knowledge.

Cross-grained means hard to deal with due to a lack of brains. It means difficult, rather than stupid – imagine sawing across the grain of wood.

“Flea in her ear” ... means an annoying feeling difficult to get rid of. If you’re sent away with a flea in your ear, it means you were dismissed rudely or abruptly.

“Irish eyes; put in with smutty fingers” means Irish ladies have dark eyes. It means that they have light eyes with black eyelashes.

“Fag end” means being almost late such as getting to lunch just before the cafe closes. The fag end of a party is the last hour when everyone is tired, the food’s run out and most people have gone home.

“DT’s”, delirium tremors, the effects of excessive drinking the night before. It stands for delirium tremens, the result of severe alcoholism.

“N***** in the woodpile” while a racist remark really means the same as the saying “something is dirty in Denmark.” He means “Something is rotten in the state of Denmark” (Hamlet). The person hidden in the firewood was escaping from slavery in the South, and the phrase means the unsuspected factor, or person acting behind the scenes.

“Got the wind up pretty badly” meaning became angry or agitated. It means to be afraid.

“Mutton dressed as lamb” means the same as “wolf in sheep’s clothing.” One person or thing disguised as a more innocent alternative. It means an older woman dressed like a young girl.

In Secret of Chimneys, Fish says to Cade, about a supposed clue, “But of course it was an outside job - I remember now. Window found unfastened, wasn’t it?” Cade simply replies “yes” and suddenly Fish says, “Young man, do you know how they get the water out of a mine?” “How?” (asks Cade). “By pumping - but it’s almighty hard work!” ... Why he would interject this totally unrelated set of comments is a mystery that will probably remain so forever. The story has nothing whatever to do with mines, pumps or water. Surely Fish is hinting to Cade that he is aware the young man is trying to pump him for information?

In The Moving Finger, chapter 1 starts with a doctor telling his patient to “take life slowly and easily” adding “the tempo is marked legato.” ... in later editions that comment is edited out and replaced by the far less lofty, “absolute rest and quiet”. “Legato” is not a tempo (speed) marking – perhaps Christie meant to write “lento” (slow). Pendergast concludes that Christie didn’t know much about music, while recording elsewhere that at one point she wanted to become a pianist.

In Third Girl, he wonders why we are told about Sonia’s meeting with an official from the Herzoslovakian embassy as this is quite irrelevant to the story. But the suggestion is that Sonia may sell her employer’s secrets – she is a red herring. The theme of the foreign au pair being a possible plant recurs in the story How Does Your Garden Grow? and Postern of Fate.

Pendergast devotes a whole chapter to the shocking subject of incest in Christie’s work. In many states of the US, marriage between first cousins is illegal. Pendergast assumes that marriage between first, second and even more distant cousins will produce disabled or damaged offspring. “Indeed Mrs. Folliatt married her 2nd cousin and had been a Folliatt before marriage. Her son, George is insane as a result of this incestuous relationship.” In Death on the Nile, “Tim Allerton is about to marry his second cousin, Joanna Southwood”. His mother fears so, but Tim is not interested.

It is interesting that Mrs. Christie, with her great sense of the ridiculous would so casually criticize the upper crust for she herself was born amongst the wealthy in spite of her claims of near poverty. Pendergast, unlike some Christie commentators, has bothered to read her autobiography. But he seems to have missed the fact that the Millers lost most of their money when Agatha was a child. Christie, her mother and two servants ended up living in a few rooms of their large house. He later claims she belonged to the “landed gentry”. Her father lived on the income from investments, largely in property in New York. The family had a large house and garden in Torquay. “Landed” means that a family owns large country estates and lives off the income from farming, and from renting out land. The devious “Uncle Andrew” in Death on the Nile may be based on those who frittered away the Millers’ money.

Pendergast claims that Christie despised doctors and lawyers, since her characters often disparage modern medicine for “just handing out different coloured pills” and coming out with the latest fashionable diagnosis. Inspector Slack: Take out all your teeth - that’s what they do nowadays - and then say they’re very sorry, but all the time it was appendicitis. Christie worked both as a nurse and as a pharmacist, and had seen fashionable diagnoses come and go. She must have met people who put no trust in doctors, and thought that lawyers just made the simple complicated. She dispensed multi-coloured pills in the Second World War.

He correctly states that Mrs McGinty's Dead is one of the funniest of her books, but thinks that the humour lies in the Summerhayes' farcical housekeeping, rather than the dry wit that is sprinkled throughout.

Later edits have frequently removed racist language. The worst offences are found in The Secret of Chimneys and The Big Four, neither of which I can reread. They are in the style of Sapper or Dornford Yates, whose heroes are proudly British and disdain “lesser breeds”. However, Pendergast does not always understand language he assumes is racist, and ascribes all unpleasant ideas and language to Christie herself rather than her characters.

Poirot himself says he was wounded by a “rascally Apache”... In The Capture of Cerberus once again the word Apache is used in its scurrilous form when Paul Varesco is described as being in “an Apache getup.”

I hope he doesn’t imagine that Varesco is wearing doeskin fringes and feathers. The Apaches were 19th century French gangsters who wore a uniform of cap, short jacket, stripy shirt and neckscarf.

He observes that different groups, including the French, Scots and Canadians, are branded as “touchy” by some characters. They are probably fed up with being denigrated as “hysterical” or “untrustworthy”. But when Major Despard (Cards on the Table) is referred to as “a white man”, this means integrity rather than Caucasian ancestry.

In The Moving Finger, a dress-shop owner is found “being firm with a stout Jewess who was enamoured of a skin-tight powder-blue evening dress.” She became a "stout woman" in later editions, and “The Jew Mr. Goldstein, who owns the Luxembourg [Sparkling Cyanide] is praised for his fairness and his kindness to his employees.”

Pendergast quite rightly flinches at the way some characters call Spaniards, Italians and Argentinians “dagos”.  A policeman “takes a shot at both Italians and American Indians, when he says, ‘I speak a bit of Italiano and had a Pow-wow with the Macaronis.’” But the language always tells us something about the character.


In Christie’s play Akhnaton, set in ancient Egypt, “there is a similar pecking order in that all the servants are Nubians, who are blacks, and the Egyptians look down on Syrians, calling them ‘barbarians’.” Surely she is mocking contemporary society?

More on Christie here, and links to the rest.
Posted by Lucy R. Fisher at 12:48