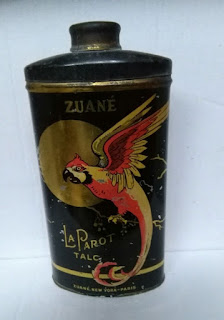 The beauty salon is the centre of the drugs trade – the stuff is hidden in cans of talcum powder.

The amateur detective is rude to police, suspects or witnesses and this is supposed to be funny.

An amateurish daub hides a Rubens.

Drug addicts have either pinpoint or dilated pupils.

A female character pretends to powder her nose so that she can observe people behind her.

An uneducated detective appreciates Wagner, unlike his tin-eared colleagues. He also instinctively recognises the worth of modernist buildings, impressionist paintings etc.

The detective and his sidekick refer to female suspects they don’t like as “the Smithson”, or whatever their name is.

The pearl necklace that is or isn’t genuine. (De Maupassant, Maugham, Edgar Wallace)

He met a stranger – she said she was his wife – he played along because... (Agatha Christie’s Destination Unknown)

The unset gems are hidden in plain sight, stuck onto a stage costume among rhinestones and silver paper – you’d need very strong glue.

People with horrible scars, or fiery eyes, always turn out to be harmless. (Inspector Pirberry, Sunset over Soho, Gladys Mitchell A very odd book that may be “all a dream”.)

Seemingly supernatural events being given a rational explanation followed by an ambiguous - for lack of a better word - ending. (Xavier Lechard on Margery Allingham’s Look to the Lady)

The "dossier" style prose that many authors use at the start of a novel e.g. a government official is telling a subordinate/superior all about the protagonist. Usually finishing with the listener saying "I see." (Alan Cassady-Bishop. If a TV episode, there is byplay with cardboard files.)

The Birlstone Gambit: murderer is person you thought had died in chapter four. Gambits are related to “types” of mysteries, like “locked room” or “Had I But Known”. (Noah Stewart)