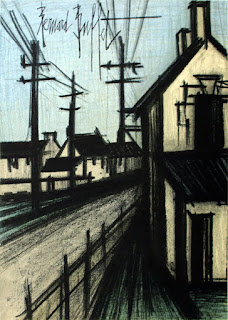 Who said someone’s student show was the best work they ever did?

Most modernist painters had private incomes. Cézanne lived on the income from the family bank, Banque Cézanne et Cabassol.

Many artists “never get better than their first work.” (Art critic Roberta Smith)

Sometimes you carry on when your “day” is over: Decadent futurists – their early brilliance long gone. (Steven Poole)

In 1939, painter Giorgio De Chirico adopted a neo-Baroque style influenced by Rubens. De Chirico's later paintings never received the same critical praise as did those from his metaphysical period. He resented this, as he thought his later work was better and more mature. He nevertheless produced backdated "self-forgeries" both to profit from his earlier success, and as an act of revenge—retribution for the critical preference for his early work. He also denounced many paintings attributed to him in public and private collections as forgeries. (Wikipedia)

Late in her career, portraitist Tamara de Lempicka ditched her Art Deco style for colourful, blurred abstraction. She wanted her ashes dropped from a plane into an active volcano, but they landed in someone’s back garden.

Artists who started out as decent painters with a wartime palette (khaki, grey and airforce blue) became “liberated” in the 60s and produced highly coloured abstract trash.

Philippe Jacques de Loutherbourg (1740-1812) created theatrical scenery and painted moonlight and firelight effects. He gave it up to study the occult and mesmerism, and became a spiritual healer.

Bert Hardy photographed London street life, but then retired to the country to paint “natural forms”.

Eccentric painter Edward Burra copied Dali, but managed to transcend the evil influence. His best pictures are of New York’s Harlem in the 30s.

Gluck (born Hannah Gluckstein) gave up art to research the history of paint and make her own. However, after 10 years out she returned to painting.

A bad artist paints an occasional gem – usually flowers, buildings or landscape – possibly because the subject rises above the clumsy handling. His early works are rather charming, because they’re very of their time. He thinks they’re “terribly dated” and is ashamed of them. The later works aren’t worth bothering with. He probably jumps on the bandwagon of a movement and produces bad works in their style.

You spend your whole life sculpting a giant marble group that you keep under sheets and destroy just before you die. (Described in Giorgio Vasari’s Lives of the Artists)

Fred Bromfield is a painter who has always striven for a level of recognition he has never achieved. (Guardian, 2013. His wife worked, he looked after the kids. His daughter ponders the effect it had on the family, while admiring her father's work.)

Barry Flanagan was an innovative, ground-breaking, playful etc avant-garde sculptor whose early works were bought by the Tate. In the 70s he read a book about hares, and sculpted nothing but hares for the next 30 years (until his death). Was it a sad end to a brilliant early flowering? Or did he just decide to be populist and make work that sold? The public loved his sculptures and councils bought them for “plazas” and malls. And he died worth €14 million.

Ronald Searle hoped to be recognized for more serious work than the St Trinian’s series about naughty schoolgirls. He moved to France and fell under the influence of sentimental illustrators like Raymond Peynet (famous for a sub-Chagall series about lovers).

Averse to criticism as artist Percy Kelly was, and convinced of his own greatness ("My talent is often too much for me"), Kelly frequently alienated people, not least those who were trying to help. In childhood, as a twin in a working-class family of seven children, he'd been given special treatment and continued to demand it throughout his life, especially from women. (Guardian Feb 2012)

War artist Feliks Topolski searched for a role after hostilities ceased. His people became tangles of lines as he tried to record the current scene. He loved the beatniks and hippies, probably seeing them as the equivalents of the Polish prewar political cabaret scene of his youth. He piled up his war art in his railway arch studio, which then caught fire. Years later, the layers of now water-damaged paper were rescued and found to be treasure.

Canadian painter Emily Carr recorded First Nations life but then was influenced by mystical landscapists the Group of Seven and produced rainbow coloured abstract forests for the rest of her life. Carr did not receive widespread recognition for her work until she changed subject matter from Aboriginal themes to landscapes — forest scenes in particular. (Wikipedia)

John Everett Millais was a meticulous pre-Raphaelite painter who spent years on pictures like Ophelia and Mariana. Eventually he adopted a looser style and produced more popular works and society portraits.

Painter Scott Nellis started off with psychedelia but followed the Zeitgeist and in the 80s produced pastel-shaded landscapes.

Oskar Kokoschka's last years were somewhat embittered, as he found himself marginalized as a curious footnote to art history. Wikipedia

Success came too late. I was an old man when I became known. Nobody remembers that I like talking about other things than paintings. All of these things make me feel more lonely. (L.S. Lowry)

I left the show concluding that Lucian Freud is the Orson Welles of portraiture, starting brilliantly before going into a long, slow decline. (Charles Spencer, 2012)

Margery Allingham’s mystery Death of a Ghost is set in a declining artistic colony in Little Venice. The inhabitants originally revolved around the larger-than-life John Lafcadio, a “great” early 20th century painter of historical crowd scenes. Since his death, his wife and various acolytes keep his name before the public. The rather sad Mr Potter lives in a cottage in the garden, and spends his days teaching art and producing prints using a process he’s invented himself. Friends secretly think he’d be happier selling stationery. But the reader begins to wonder if she’d rather have a Potter lithograph of a railway bridge or an upturned wineglass than one of Lafcadio’s bombastic, dated productions.