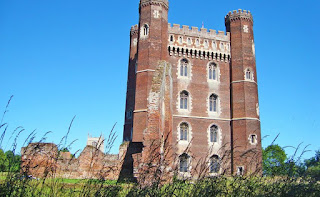 Dr James Wright says he’s found buildings made of materials from far afield. Caen stone, Purbeck marble and Tournai marble were popular. Transport of heavy materials by horse and cart along unmade-up roads was prohibitively difficult and expensive – but transport by water was much easier – across the channel, or along rivers. Building accounts of Tattershall demonstrate stone brought from Lincs Wolds to the Fens via River Bain for use at the castle. (Dr James Wright)

We have some of the real canon bollards here in Swanage. They were brought to Dorset as ballast in the empty stone boats returning from London. (BSG)

Quarried Purbeck stone was put on barges and sent to London. Bollards brought over as ballast are dotted over Durlston Country Park. (@jurassicg1rl)

When I visited the Thai royal palace, I saw lots of statues like this – clearly Chinese, not Thai. I asked our guide, and he said that they came over as ships' ballast! They weren't worth anything in China, but the Thais liked them, so they set them up. (@jackgraham 2021)

Garden-visiting at Fallodon Hall. Beautiful red bricks that came over as ballast from
Amsterdam. (@cornwell167)

Sidenote: cobble stones are very abundant in my area. They all came over as ballast and were unloaded to pick up corn in the 1600s. Most American cobblestones are 400 years old. (@Hashbang2)

Not for the first time on this trip, the reindeer are confused; Dutch architecture is not what they were expecting to see in Topsham. As the Hays Holiday Sleigh takes in the small town, Santa explains its heritage as a cotton port and how bricks came over in Dutch ships as ballast. (@eagie1863)

Very strong trading and cultural inks between Scotland and the Low Countries back then, a lot of pantiles came over as ships' ballast and ended up on our roofs too! (@OssianLore)

You know the Gras bayonet fire tongs, poker and shovel combination that you used to see in antique shops? I was told once that the French bayonets came over as ships' ballast and it was dockers making them, rather than their being 'trench art'. (@SimonJHistorian. A quick look at bayonet fire irons show standardised, and professional-looking, sets, probably the output of a factory either repurposing old bayonets or creating fire irons that look like repurposed bayonets. And if you had a load of old bayonets, surely they'd be too valuable to be dumped in a hold and then given away?)

Ballast obviously can come from pretty much anywhere but it also ends up left in other places. The house foundations in Brunswick Town North Carolina are composed of rocks from all over the world that came as ballast. (@kesselring_todd)

My Sicilian relatives tell me the giant mosquitoes came over from Africa in ships that used old rubber tyres as ballast. Once there they just went crazy. They call them Tigre! I’ve had a few tigre bites and once had to fly back home in old-lady slippers. (@AdamoJulia. Could mosquitoes fly from Africa? Presumably water collected in the tyres and the mosquitoes bred in it.)

I am Irish. My ancestors came over from Ireland as ballast on a ship to Canada to escape starvation. They walked from Canada to Kansas with a one-year-old and a two-year-old. In three generations became prosperous land owners, sheriff of Saline County. (@clubwedge. I think she means “steerage”.)

The marble altar in our church came over from Italy as ballast. (@ckarmi)

I'm in the general thereabouts of Canberra. [Cast iron grave markers are] not really common but I've seen the odd one in many of the country town cemeteries around here. Have wondered whether they came over from England as ballast, like the iron lace verandah decorations. (@HipBookfairy. Complete with appropriate inscriptions?)

Waterside Plaza, with views over the East River towards Brooklyn and Queens, is built on English soil – or to be precise, on rubble brought from Bristol as ballast in 1942. (Historian @holland_tom. Presumably from bomb damage – and Atlas Obscura confirms the story.)

Your reminder that the FDR Highway in NYC was constructed using rubble from the Blitz in London that was brought over as ballast in American ships. (@ErikFallsDown)

In the nineteenth century, cargo boats returning from Europe to North America would carry quarried stone as ballast. They contribute to the architectural heritage of some east coast cities (for example Montreal), where this stone was used in building. (asiansealand.com. The site also states that water ballast was used once ships were metal-hulled and powered by steam.)

Definitely slipper limpet. The one on the bottom is a lady, and the one on top is a gent; the ones in the middle are changing sex. They came over from America years ago in ships' ballast water. The oyster people hate it as it competes with oysters for living space and food. (@AccessMattersUK)