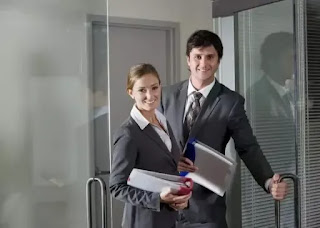 Our friends like to tell us that back in their day they walked several miles to school in a snowstorm, never locked their doors, and travelled alone on trains aged four. They also like to say "I hit the bully and he never bothered me again, school was mean to me and my nan turned up and hit the teacher." (I hope it’s true about the bullies.)

Some of my male friends claim the following scenario happened to them:

I held the door open for a woman when we both tried to exit. She refused to walk through the door and looked at me like I did something wrong, is this normal? (Quora)

You know how today started? I walked through a store, held open the door for a woman who then proceeded to walk in and not say a word. Now I know my smile isn’t winning any awards anytime soon and my cologne may have been on a bit strong, but I would’ve taken a, “I can open my own door, *hole?” over the silence. (Mario Saenz)

This early 20s looking chick was entering a building and a dad walking out told his two young sons to “step aside and hold the door open for the lady” and this bitch just gets the biggest scowl on her face. like? Screw you nasty feminist women for thinking you’re above chivalry. They held the door open for me too, and don’t worry i made sure to thank those young gentlemen as classy individuals do. (@morganisawizard)

This scene is obviously staged. And this is one of those "It happened to me" stories. And people seem to like to chew over door-opening and give it far more analysis than it deserves.

It happened to me. 12th annual Mediterranean Model United Nations sessions this February. I represented Italy in the Security Council, she represented France in the Security Council. I was having a conversation with the delegate of the USA as we were walking back to our room from our break and very absent-mindedly openned the door for her and said the worst thing any man can say to a woman, “Ladies first”.

Let’s note that later that day she proclaimed herself a ‘feminazi’. That was the first time I’ve heard a person use that word to describe themselves and not used by others as a derogatory term.

Her reaction, “Huh, well that’s sexist.” I simply said I’m sorry and went to my seat.

Why? Because I was honestly sorry that she lives such a miserable life where an act of kindness with the purest of intentions is viewed as a malevolent action. I was sorry that she will never be able to be truly happy because she will be too busy finding offense in every little thing, every day of her life. It is truly sad. So how should I act? Just keep saying I’m sorry. It diffuses the situation, and is also sincere, because I am sincerely sorry for those people.

An elderly man held open a shopping mall door for a woman who gave him a mouthful. "Do you think women are incapable of opening doors?!" etc. He legit tipped his hat at her, and said: "My dear, I'm not doing this because you are a lady, but because I am a gentleman." (@ScarredParrot, who claims they witnessed this scene.)

Great story, but funnily enough Desmond Ravenstone of Oberlin College was there at the same mall on the same day, and I think his wording is more correct:

On a city street, a man held a door open for a woman. “You don’t have to hold it open just because I’m a lady,” she snapped. His reply: “I’m not holding it open because you’re a lady, but because I’m a gentleman.”

A man on my college campus held open the door for a woman who was right behind him. She proceeded to excoriate him on his “patronizing” behavior, and how she didn’t need his help to walk through a doorway. “All right, then,” he replied calmly, then closed the door and walked away. (BTW, I happen to know this otherwise mild-mannered fellow held doors open for everyone, but also refused to put up with what he considered irrational behavior.)

(Quora. Note the sting in the tail.)

Another Quorite comments: Oh, gawd! This again? She lists some examples of gender inequality and then ends: Here is the rule: people with empty hands hold doors for people with full hands. Strong people hold heavy doors for weaker people. Nobody is allowed to infer any meaning from door holding. Door holding is now and forevermore declared free of any semiotic significance!

From my book, What You Know That Ain't So:

In the late 19th century, the satirical magazine Punch ran a cartoon featuring two bedraggled London cleaning ladies. One is explaining to another how she won a recent argument hands down: “I sez to ’im ‘Pig!’, I sez, and swep’ aht.” (Translator’s note: I called him a pig and swept out – I left the room with theatrical dignity and a sweep of my long skirts.)

The term “male chauvinist” was used in the 60s, but without the “pig”, until the following incident:

A journalist described an encounter between noted feminist Anna Coote and some well-known man. Anna and the bloke arrived at a door together, and he opened the door for her. “Male chauvinist pig!” she exclaimed, and swept out through the door.

In those days if women suggested that they might be treated on a par with men, people would point out that they would forfeit the right to have doors opened for them, and all the rest of the behaviour that comes under the heading “chivalry”. When feminism was revived recently, this hoary old cliché was disinterred with it, along with many others.

Whoever made up the story must have been familiar with the Punch joke, and assumed his readers were in the know.

Nicolas Chauvin was a French soldier who continued to be devoted to Napoleon long after the Bourbon dynasty was restored to the throne, allegedly. 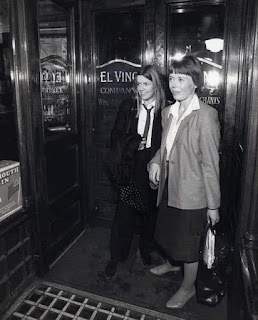 Anna is on the left. For year's, the wine bar El Vino's refused to serve women at the counter. The other woman is Tess Gill.

I wonder if the "because I am a gentleman" story started life as a Punch joke? And when people appropriate an urban legend as a personal experience, I always wonder what passes through their minds.

The take-home seems to be: She never said thank you therefore all feminists are vile and we should ignore their requests”.