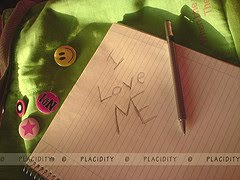 Just be yourself! Live in the moment! Be spontaneous! Don't copy other people! Feel, don't think! Don't worry about what other people are thinking about you! Confidence comes from within! Or maybe not...

Professor Pam Mara, a psychologist ...said “How we think others see us and how we see ourselves affects all our behaviour; book choice is one clue to others and ourselves.” Guardian August 23, 2006

"For a long time, parents discouraged their children from worrying about what others think. They didn't realize how shortsighted and stupid that was," says Mark Leary, a social psychology professor at Duke University who studies impression management.

Sharing and self-disclosure can help achieve intimacy and closeness with others and reduce social anxiety. BPS Research Digest

(When hiring “overqualified” staff) the authors recommend that employers and employees go into situations “with their eyes open”, establishing a clear psychological contract . BPS Research Digest

Scrutinising and discussing the actions of the famous allows us to examine our own behaviour, without ever quite admitting that that’s what we’re doing. David Aaronovitch on the kerfuffle over celebrity adultery, May 26, 2011

We overestimate the pleasures of solitude and leisure and underestimate how much happiness we get from social relationships. smithsonianmag.com

When people don’t act immediately they talk themselves out of it. Linda Papadopoulos, psychologist

And it's also a fine thing to be able to reduce dissonance after you've made a decision and bought that car and married that person and moved to Cincinnati, so that you won't beat yourself up about everything that you might have done wrong. The people who don't reduce dissonance enough suffer from regret and remorse... Carol Tavris

“You have not yet learned that in this life you have to be like everyone else.” Kubrick’s The Killing

“Differences between men and women in aspirations for marriage and children are fairly small,” says Anke Plagnol... “Gender differences in satisfaction depend largely on attainment.” ... “Of course, one doesn’t have to be married to be happy, but if that’s something you really want – and it is for most people – then the failure to attain it can have an impact on your overall happiness,” Plagnol says, adding that those in a relationship also tend to be in a stronger financial position than those who must depend solely on their own resources.

Emotional Intelligence is a useful resource that helps develop networks, figure out hierarchy, and influence others. BPS research digest

With no readily imaginable future, no possibility of a shared social life, no financial support and a relationship based on duplicity… [without] shared friendships, holidays, mutual hobbies, a partner at ghastly couples dinners. Mariella Frostrup explains why people want relationships while talking about mistresses, May 1 2011

Basic problem solving on work and relationship issues may make a difference [more than therapy or CBT]. Guardian February 27, 2008