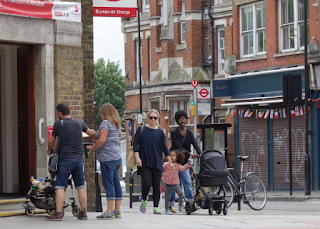 RACISM
The hilarious tweets of people who don't live in London telling me that it's "getting worse": code for "black and Asian people live there". (@Otto_English)

I'm afraid all the Brexiters I know whether family, in the pub or on the bus, the brash ones say "Send them home". The more subtle ones try to talk about "sovereignty" or "making our own laws". (FionaRB‏ @MsMainstay)

When people attack immigrants, we have to 'understand their legitimate concerns'. When they defend them, it 'leads to further polarisation'. (@IanDunt)

A light hand on the tiller is always the best approach. (re moderating FB group. Does this mean “Don’t remove racist remarks”?)

The eugenicist Pioneer Fund was founded by a Nazi sympathiser in 1937 and it aims to "prove" a genetic and intellectual inferiority of black people. (Liam Hogan‏ @Limerick1914)

The Creativity Movement is a hardcore white supremacist group that dates back to the 1970s, notable for its attempt to assume the guise of a religion as a way to promote its racist and anti-Semitic views. (blog.adl.org)

TALKING THE TALK
I was told during the admissions process that there was no issue with nonreligious students attending the school, that it was inclusive and open to all who applied. But I just started my first week, and that doesn’t seem to be the case at all. (slate.com)

PEOPLE
Bernie Katz called his father “a colourful character – a real villain with a heavy clout around South London”. (Times 2017)

Notorious for her partying lifestyle. (BBC News re Molly Parkin)

I'd always hear her described by that awful word, feisty. (Lindsay Anderson on Bette Davis’s late-career appearances on chat shows, when she was “encouraged to be bitchy”.)

Steer clear of anyone who uses the phrase 'It's just (banal description)!' to belittle the passions + enthusiasms of others. (Jon Dryden Taylor ‏@jondrytay)

Calm down is the patronizing form of shut up. (Simon Schama)

Men are never called "spoilt" are they? It's for children and women. (Abi Wilkinson ‏@AbiWilks)

I am sometimes tagged as belligerent because I pick people up on fictitious hate-stories. (Kate Long ‏@volewriter)

‘Comfort zone’. One of those buzz-phrases that enables people to force [you to do] stuff you don’t want to do. (Some Bloke in a Hat ‏@toolegs)

You do know, Ginette, that you’re very self-interested?’ ‘That’s what they always say about women when they try to ensure their future. And then jump on them when poverty makes them do a job that they haven’t chosen.’ (Georges Simenon, Maigret at the Coroner’s)

Wit, raconteur, bon viveur, [he] could sometimes enjoy life too much. He became ill in recent months when his conviviality finally caught up with him. (Times obituary of an alcoholic)

He’s his own man. Be true to yourself. “Just a lame-ass way of saying you want everything your way.” (FB)

Some people tell you that you're too much this, or not enough that, or always the other. These people are abusers. (Michael Topic @tropicalontour)

In my experience, such people are also called ‘managers’. (Some Bloke in a Hat ‏@toolegs)


'The public' is always a construct and people who use it in arguments rarely seem to include themselves in it. (@How_Upsetting)
Some things aren’t “out of character”—they establish character. (slate.com)

Do you have a life; or are you just living? (@volatilitysmile)


Justine Greening says selective schools "will be open to all", which is odd because they aren't by definition. (Richard Adams @RichardA)

ARTS
A company of actors and performers will present archive material from the exhibition through the prism of contemporary performance. (British Library Translation: They will not create the original performances.)

Reading a book about publishing. Have found a new euphemism for commercial failure. "Working ahead of cultural trends". (@Andr6wMale)

I really think we need to take back the word 'disruption' viz. something really stupid that achieves nothing. (Nik S‏ @Greasy_Boiler)

It's not "gritty" (a euphemism for forced seriousness and graphic violence). (@Aelkus)


Art dealers also call themselves gallerists... A gallerist does not generally now have a gallery, but a “space”... Art dealers do not buy and sell paintings: they “source” them and “place” them. (Philip Hook, Rogues' Gallery)

Eclectic career – that sounds like a weasel word for “uneven”. (Danny Baker)

And while star works by great artists make huge sums at auction or in private sales, the art market can be illiquid, volatile and subject to painfully high transaction costs. (FT)

The Advertising Standards Authority complained that many Instagram stars are plugging brands without disclosing that they are being paid to do so. (Hugo Rifkind Instagram star: shill for product.)

When "in stock" means "in stock with our distributor" and "next day delivery" means "next day after we get it" I tend to go nuclear. (JH)

London house prices hit by most significant slump for five years (@standardnews)
By "slump" they mean "still rising but not by as much as before". (Tom Copley)

Think tanks are all PR agencies doing work for undisclosed clients. Some are more open about their funding than others. (@mrdavidwhitley)

Starting in the mid-1970s, a handful of conservative donors had funded the creation of dozens of new think tanks and “training institutes” offering programmes in everything from “leadership” to broadcast journalism to direct-mail fundraising. (Guardian)

I heard this from students quite regularly at @Conservatives conference. Groupthink getting marked up, critical thinking being marked down. ((Tory MP @JamesCleverly Translation: groupthink means socialism, anti-Brexit; critical thinking is conservatism and Brexit. Many university lecturers chipped in to deny the allegation.)

Confucian philosophy is also very strong on respect for your seniors, with “respect” meaning in essence doing what you’re told. (rmeredith@cix)

Much of the time, “that’s not realistic” is a coded “that makes me uncomfortable.” (@SamSykesSwears)

In the 80s workers were all "facilitators", with customers suddenly "clients". (And everything was a “project”, even when it was a thing.)


I have no unpopular opinions, just opinions I haven't yet explained well enough for a mass audience. (@AndrewSabisky)

It's really odd, isn't it, how the vast majority of advice on 'how to be successful' boils down to 'do more work than you're paid for, peon'. (Dean Burnett‏ @garwboy)

“Seek help” is sometimes used to mean “get sober through rehab or a recovery program”. (slate.com)

Some in tech have started identifying as “contrarians,” to indicate subtly that they do not follow the “diversity dogma.” (NYT Sept 2017 Some of them want to form a male-only society. How's that going?)

The many layers of Britain’s food culture set to expand in 2017 (Translation: make more money)

Whenever someone in The Spectator writes "flexible pay settlements" I see a queue getting longer at the food bank. (@RevRichardColes)

What #MAGA really means: it's a return to a time when white men could offend women and minorities without consequences. (@keithboykin)

Apparently it's being a condescending metropolitan elitist or something if you tell #brexiters the truth. (Solange LeBourg)

New museum director must have “a highly developed ‘EQ’ to ensure successful relationship-building”. (Translation: EQ is charm, and relationship building means fund-raising.)
The hallmark of emotional intelligence is self-awareness, which involves not just knowing how you are but also how other people perceive you. People with high emotional intelligence are masters of influence—they’re skilled at altering their behaviour to make the most of a given situation. (Forbes.com)

AFAICS, "the real world" generally refers to "people who believe and spout random bullshit based on no evidence at all". (@johnb78)

The headmaster said: “The teacher you’ll be working under can be rather difficult.” It wasn’t long before she realised that “difficult” was a colossal understatement. (Guardian Sept 2017)

So the UK government wants the ‘best and the brightest’ to come to the UK after #Brexit, but at the same time don’t like experts and when I suggest that in Universities people are more likely to leave I’m told that shows ‘university groupthink’. So who are these ‘best and brightest’ if universities are full of ‘groupthink’ and we’re better off without them? What does ‘brightest’ mean? (@PaulbernalUK)

Traitor: Anyone who uses legal or democratic processes to question a political idea. (@CyrusBales)

White House walks back promise about Trump donating his “personal money” to Harvey victims. (thinkprogress.org Translation: reneges on.)
Rep Kelly walked back his statement. (He withdrew an absurd allegation.)

And still I wait... for a 'writing' job ad that doesn't feature the words 'content', 'brands' or 'targeting'. (Mister Neil Kulkarni‏ @KaptainKulk)

I also do not really appreciate that our 'annual leave' form has been renamed 'absence management'. I'm *allowed* to be absent. (Charlotte L. Riley‏ @lottelydia)

A counsellor blogs that he never wants to hear “challenging behaviour” or “complex needs” again.

Most of the time when we describe something as 'barbaric' what we mean is "we've stopped doing that". Occasionally, very recently. (Alex Andreou‏ @sturdyAlex)

"Emotionally truthful" (Chilcot on Blair) is up there with Alan Clark's "economical with the actualité". (HP)

"As well as ensuring the high quality of the sector... we need to confront the possibility of some institutions choosing – or needing – to exit the market. This is a crucial part of a healthy, competitive and well-functioning market." Beneath the euphemisms, this is its starkest messages to universities: some of you need to go. (thesociologicalreview.com on higher ed white paper)

Puerto Rico to close 184 public schools in move expected to save millions of dollars amid a deep economic crisis. (The Associated Press @AP)

That's a funny way to spell, "Puerto Rico forced to close 184 public schools so US hedgefund owning politicians can cash in their stocks"(#SinglePayer‏ @puzzleshifter)

When they say unity, they mean obedience. They will not receive it. (@IanDunt on Theresa May’s Easter message.)

"I'm entitled to my opinion" is a common shorthand for "You're not entitled to your opinion that my opinion is terrible." (James Chalmers‏ @ProfChalmers)

The Police force in the UK has lots of red tape, or as some people like to call it, accountability. (MS)

We almost have this inbuilt idea that fresher, local, organic – all those words are code for “expensive” ‑ and a higher price tag is better. People will use the words “cheap food” like it’s a morally negative thing. (James Wong)

Produces as an alibi for their mistakes that old British standby “a breakdown of communications”. (Andrew Billen)

Every one of the posturing notables simpering “refugees welcome” should be asked if he or she will take a refugee family into his or her home... (Peter Hitchens)

We 'lurch' to the right and you, what, pirouette to the left? (Byzantine Ambassador ‏@byzantinepower)

School leaders say volatile results have vindicated their concerns over rushed implementation of tough new exams (Their school didn’t do as well as they hoped. And Steiner Academy Frome was one of the worst performing in the country.)

Audiences say "journalism" when they liked it and "media" when they don't. (@sarahjeong)

Psychology intro textbooks often have difficulty covering controversial topics, and whether intentionally or not, they frequently present students with a liberal-leaning, over-simplified perspective. (BPS Digest)

I have a suspicion that "reducing the stigma" [of disability] might mean "telling people who aren't able to work that they can really". (Dan Davies ‏@dsquareddigest)
Better yet, "telling other people that people who can't work are pretending". (‏@NotGiacomo)

Saying, ‘Look, I’m not going to argue with you about this any longer,’ to subtly indicate you’ve realised you’re wrong. (Very British Problems, Rob Temple)

I retired the term "problematic" from my lexicon some months ago and mostly, my life has been much, much better for it. Seemingly it's just devolved into a way to describe things one subjectively disagrees with as inherently flawed – without providing evidence. (‏@JamilesLartey)

"Obscure Belgian region" – anywhere in Belgium. As opposed to regions of Britain, every one of which is globally renowned. (@RobDotHutton See “remote Hebridean island”.)