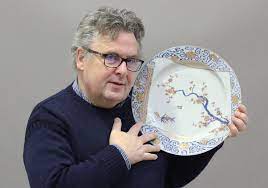 Can we stop antiques programmes patronising old ladies? Lars Tharp twinkles at an elderly lady and goes on and on about “kidney jade” as if it was potentially embarrassing. She hung on to her smile and her dignity.

An elderly lady presents a walking stick made out of a shark’s spine to David Harper. He tells her to feel its lovely tactile qualities and then tells her it’s an elasmobranch body part. “I knew that.” “Doesn’t it spook you?” “No, not really.” “I’ve had people shriek and drop them!” Clearly, he was expecting her to shriek and drop the horrible thing and it would make “good television”. So ha ha ha, David.

And we stop encouraging contestants to buy loo seats? And can we prevent the auctioneer seizing the opportunity to be a stand-up comedian and coming out with endless wee jokes? Please? Same goes for alcoholometers, surgical instruments, bed pans, decanters etc.

And can we stop the Les Dawson jokes about “the wife” who of course is really “the boss”, ha ha ha ha? “So there’s you and your three sons but your wife doesn’t like this suit of armour? It’s four to one?”

The Australian border security programme Nothing to Declare keeps in the segments where the man caught with three suitcases full of undeclared food blames it on his wife or mother and smiles as if it’s a big joke. “I’ll be very very cross with my wife and tell her not to be so silly next time he he he!” Even the nice man who dressed entirely in purple explains that he once put coloured clothes in with white garments in the washing machine and his wife was furious so now he wears nothing but purple! Big charming smile, everybody laughs.

Tim W: And how did you become a gender expert?
Contestant (old white man): I think it was trying to understand the female brain.
Tim: And have you cracked that one?
Contestant: No!
All: Ha ha ha.

Another cliché: the expert roars with laughter at everything done or said by a very ordinary middle-aged couple. Sometimes one of the pair is coached to be the “card” who goes off-script and spontaneously buys things or knocks down the price. “Ooooh, there’s no holding her!” or “I knew I was going to have trouble with you!” “She’s very decisive, isn’t she?”