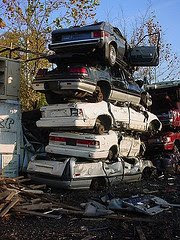 They come from nowhere, they’re everywhere, and then you ask yourself “When did people stop saying…?”

flipping and churning were much used in May. "Flipping" is refurbishing your house with taxpayers' money and then selling it on. "Churning" is having two homes, and constantly switching their status from "first home" to "second home" and back again.

everything is broken, not just society

In February, people used bolthole a lot, especially having to rent out a Devon "bolthole" because of the credit crunch

crinkly is now crinkle (as in crinkle blouse), though crisp has become crispy

kettle (verb) – what the police do to protesters